Walter Sydney Vinnicombe (26 September 1888 – 27 October 1970), known as Wally Patch, was an English actor and comedian. He worked in film, television and theatre.

Vinnicombe was born in Willesden, Middlesex and began working on the music hall stages in 1912 and at regular theatres in 1938 at the Theatre Royal, Drury Lane. His first film appearance was in 1928, and went on to appear in 213 other films. He worked up to his death, with his last television appearance in the comedy Doctor in the House in 1970. [1] [2] 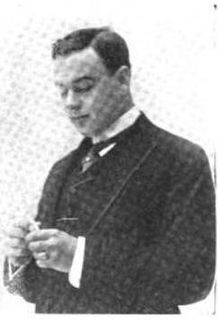 James Michael Burke was an American film and television actor born in New York City. He made his stage debut in New York around 1912 and went to Hollywood in 1933. He made over 200 film appearances during his career between 1932 and 1964. He was often cast as a police officer, usually a none-too-bright one, such as his role as Sergeant Velie in Columbia Pictures' Ellery Queen crime dramas in the early 1940s. Burke can also be seen in At The Circus, The Maltese Falcon, Lone Star, and many other films. One of his memorable roles is his portrayal of a rowdy rancher in the 1935 comedy Ruggles of Red Gap.