Last updated May 15, 2022
14th-century English scholastic philosopher and logician
For other people with the same name, see Walter Burleigh (disambiguation).

Walter Burley (or Burleigh; c. 1275 – 1344/45) was an English scholastic philosopher and logician with at least 50 works attributed to him. He studied under Thomas Wilton [1] and received his Master of Arts degree in 1301, and was a fellow of Merton College, Oxford until about 1310. He then spent sixteen years in Paris, becoming a fellow of the Sorbonne by 1324, before spending 17 years as a clerical courtier in England and Avignon. Burley disagreed with William of Ockham on a number of points concerning logic and natural philosophy. He was known as the Doctor Planus and Perspicuus.

Burley was born in 1274 or 1275, possibly in Burley-in-Wharfedale, Yorkshire, or in Burley near Leeds. [2] Little is known of his early life. He was made rector of Welbury in Yorkshire in 1309, probably through the influence of Sir John de Lisle, a friend of William Greenfield. [3] As throughout his career, he did not act as rector, employing a substitute and using the income from the living to finance his study in Paris, where he completed his lectures on Peter Lombard's Sentences , and probably encountered the work of his contemporary William of Ockham. Burley's commentary on the Sentences has not survived. [4]

Burley became a courtier during the political events that followed the deposition of Edward II of England in 1327. His first assignment was to try and obtain the canonisation of Thomas, 2nd Earl of Lancaster, who had been one of the leaders of the baronial opposition to Edward II; Thomas had become venerated as a martyr within a few months of his death. Burley was sent to the papal court at Avignon to appeal directly to Pope John XXII. By coincidence, William of Ockham was also staying at Avignon, having been summoned there in 1324 to answer charges of possibly heretical statements (by 1326 there was a list of 51 charges against him).

Burley's associates were all closely involved in these attempts at canonisation (none of which was successful). One was Richard de Bury, a bibliophile and patron of the arts and sciences, who became Burley's patron and at whose request Bury translated some works of Aristotle into English. [5]

Burley had become a master of theology by 1324. In May 1327 he became canon of Chichester by the provision of the pope, but exchanged the position in 1332 to become canon at Wells, where de Bury was dean. Bury had been involved in the coup d'état of 1330 that resulted in the execution of Mortimer, and the de facto accession of Edward III to the throne. In 1333 de Bury was consecrated Bishop of Durham by the king, over-ruling the choice of the monks, who had elected and actually installed their sub-prior, Robert de Graynes. [6] In February 1334 de Bury was made Lord Treasurer, an appointment he exchanged later in the year for that of Lord Chancellor. He gathered together a group of intellectuals including Thomas Fitzralph, Richard de Kilvington, Robert Holcott, Thomas Bradwardine and Burley himself.

Walter may have been a relative of his younger contemporary Adam Burley. [7]

Burley was one of the first medieval logicians to recognize the priority of the propositional calculus over the term logic, [8] despite the fact that the latter had been the main focus of logicians until then. Burley also seems to have been the only 14th-century logician to have taken the position that, in line with modern views on the material conditional, the principle that "from the impossible anything follows" ("ex impossibili sequitur quodlibet") is both a necessary and sufficient condition for explaining the logical relationship between antecedent and consequent. [9] He was also known for his commentaries on Aristotle's Physics, which include the quodlibet De Primo et ultimo instanti (around 1320) and the longer work Expositio in libros octo de physico auditu. [10] Burley wrote 39 Commentaries on Aristotle and 32 Treatises and Questions (many unedited). [11]

This is Burley's main work, in which he covers such topics as the truth conditions for complex sentences, both truth-functional and modal, as well as providing rules of inferences for different types of inferences. This book is known to have been written after Ockham's Summa Logicae (c. 1323), possibly partly in response to it. [12] Other works include: [lower-alpha 1] 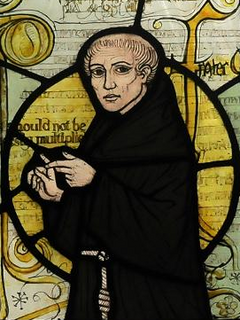 William of Ockham was an English Franciscan friar, scholastic philosopher, and theologian, who is believed to have been born in Ockham, a small village in Surrey. He is considered to be one of the major figures of medieval thought and was at the centre of the major intellectual and political controversies of the 14th century. He is commonly known for Occam's razor, the methodological principle that bears his name, and also produced significant works on logic, physics and theology. William is remembered in the Church of England with a commemoration on 10 April. 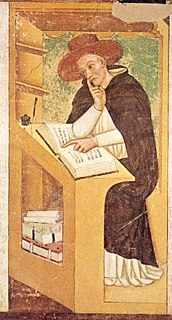 Ernest Addison Moody (1903–1975) was a noted philosopher, medievalist, and logician as well as a musician and scientist. He served as professor of philosophy at University of California, Los Angeles (UCLA), where he also served as department chair, and Columbia University. He has an annual memorial conference in his name on the subject of medieval philosophy. He was president of the American Philosophical Association from 1963 to 1964.

Albert of Saxony was a German philosopher and mathematician known for his contributions to logic and physics. He was bishop of Halberstadt from 1366 until his death.

The Conimbricenses were Jesuit professors of the University of Coimbra in Coimbra, Portugal. 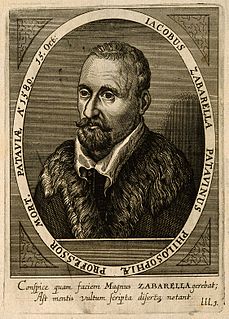 Agostino Nifo was an Italian philosopher and commentator.

Nicolas d'Orbellis was a French Franciscan theologian and philosopher, of the Scotist school. 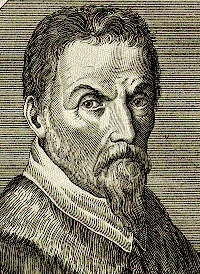 Jan of Stobnica, was a Polish philosopher, scientist and geographer of the early 16th century.

Patrick Osmund Lewry (1929–1987) was an English Dominican who made significant contributions to the history of logic and the philosophy of language in the thirteenth century. Lewry studied mathematical logic under Lejewski and A.N. Prior at Manchester (1961–2). From 1962–7 he taught the philosophy of language and logic at Hawkesyard. He was assigned to the Oxford Blackfriars in 1967. Dissatisfaction with teaching led him to work for an Oxford D.Phil. on the logic teaching of Robert Kilwardby. In 1979 he began the study of the history of grammar, logic and rhetoric at Oxford in the period 1220–1320. In 1979 he went to the Pontifical Institute of Mediaeval Studies in Toronto first as a research associate, then as a senior fellow. He died on 23 April 1987 at the age of 57 at the Oxford Dominican House.

Juan de Celaya was a Spanish mathematician, physicist, cosmologist, philosopher and theologian. He was a member of the so-called Calculators, using ideas from Merton College. He is known for his work on motion and in logic.

Adam Burley was a philosopher educated at University College, Oxford.

Jan Dullaert of Ghent Latinized as Ioannis Dullardi was a Flemish philosopher and logician who lived in France as an Augustinian friar. He elucidated principles of propositional logic in his commentaries on the works of Aristotle published from 1506 to 1509.