He was knighted by James VI of Scotland on 17 May 1590 at the coronation of Anne of Denmark. [1] He was later appointed Keeper of Liddesdale and Warden of the West March on the English border. [ citation needed ]

Buccleuch was implicated in the troubles of his step-father, the rebellious Earl of Bothwell. He went abroad in September 1591, first travelling to Italy with the poet William Fowler. [2] In November 1592 Buccleuch was allowed to return to Scotland from Flanders by the intercession of Anne of Denmark, at the request of the old Lady Ferniehirst. [3] In 1594, Buccleuch was re-appointed Keeper of Liddesdale.

In August 1594 he performed in tournament at the baptism of Prince Henry dressed as an Amazon. [4] In January 1595 he influenced Anne of Denmark to intercede for the life of James Scott of Balwearie, an agent of the rebel Catholic earls. [5] It was suspected an English Catholic agent, Nicholas Williamson, tried to meet him in March 1595. [6]

In April 1595 and in 1597 he raided Tynedale in England with 100 or 1,000 men. They killed at least 30 residents, and burnt houses at Thorneburn, Donkleywood, Stokoe, Hordley Hill House and others including the home of a widow, Catherine Dodd of Bruntbank, and caused damage valued at £191, and killed four members of the Charlton family at Bought Hill (now Charlton, Northumberland). [7]

As Keeper of Liddesdale he rescued Kinmont Willie Armstrong from prison in Carlisle, an exploit famous in border lore. Armstrong, a well-known border reiver, was captured by English soldiers led by Deputy Warden Salkeld on 17 March 1596, in violation of a truce day. He was taken to Carlisle and imprisoned in Carlisle Castle. Buccleuch, as Keeper of Liddesdale, petitioned the English Warden Thomas Scrope, 10th Baron Scrope of Bolton for Armstrong's release without success. Unable to release Armstrong by diplomatic means, on the night of 13 April 1596 Buccleuch led a party of about eighty men to Carlisle. Leaving the main body of his men a small distance outside the city to ambush any pursuers, Buccleuch took a small raiding party on to the castle where Armstrong was imprisoned. Finding their ladders too short to scale the walls, the raiding party breached a postern gate — or more probably bribed a contact inside the castle to open it for them — located Armstrong's cell and freed him, returning him back across the Scottish border. No fatalities were occasioned on either side. [8]

The raid on Carlisle created a diplomatic incident between England and Scotland, and war between the two nations appeared imminent until Buccleuch surrendered himself to the English authorities. Tried and found guilty, Buccleuch was placed in the custody of the English Master of the Ordnance at Berwick, Sir William Selby, and was afterwards sent to London.

When Buccleuch reached London, and, having been presented to Queen Elizabeth I, was asked by her how he dared to undertake an enterprise so desperate and presumptuous, Buccleuch is reported to have replied, "What is it that a man dare not do?" Unaccustomed though she must have been to such rejoinders from her own courtly nobles, Elizabeth not only did not resent the answer, but turning to a lord-in-waiting, said, "With ten thousand such men, our brother in Scotland might shake the firmest throne of Europe".

Buccleuch's kinsman, the author Sir Walter Scott, transcribed a well-known ballad about the raid entitled Kinmont Willie in his collection Minstrelsy of the Scottish Border, Vol. 1.

From 1604 until the truce of 1609, Buccleuch led a company of Borderers in the service of Maurice of Nassau, Prince of Orange during the Dutch Revolt.

Scott also had (apparently by Delia, daughter of Captain Thomas Butler in Holland) an illegitimate daughter, Jean, who married Robert Scott of Whitslaid. He had an illegitimate son, John (probably to be identified with John Scott, Provost of Crichton, who died in 1646). [9]

James Stewart, 1st Earl of Moray, a member of the House of Stewart as the illegitimate son of King James V, was the regent of Scotland for his half-nephew, the infant King James VI, from 1567 until his assassination in 1570. He was the first head of government to be assassinated with a firearm. 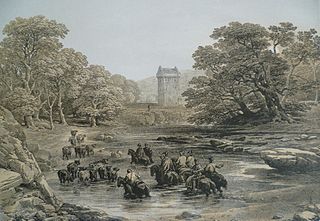 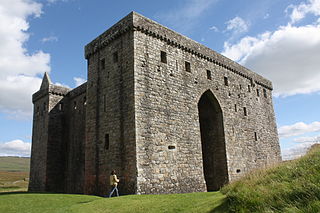 The Raid of the Redeswire, also known as the Redeswire Fray, was a border skirmish between England and Scotland on 7 July 1575 which took place at Carter Bar, the Cheviot pass which enters Redesdale. The skirmish was between the English Warden of the Middle Marches, Sir John Forster, with Sir George Heron, Keeper of Redesdale, Keeper of Liddesdale and Scottish Warden and Sir John Carmichael, the Lord Warden of the Marches, with George Douglas of Bonjedworth. It was the last battle between the Kingdom of England and the Kingdom of Scotland. 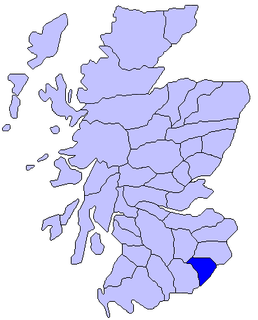 Liddesdale, the valley of the Liddel Water, in the County of Roxburgh, southern Scotland, extends in a south-westerly direction from the vicinity of Peel Fell to the River Esk, a distance of 21 miles (34 km). The Waverley route of the North British Railway runs down the dale, and the Catrail, or Picts' Dyke, crosses its head.

Branxholme Castle is a five-storey tower at Branxholme, about 3 miles south-west of Hawick in the Borders region of Scotland. 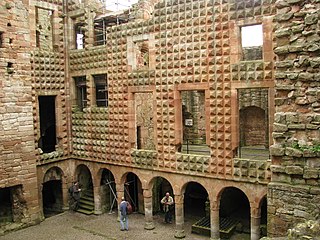 Francis Stewart, 5th Earl of Bothwell was Commendator of Kelso Abbey and Coldingham Priory, a Privy Counsellor and Lord High Admiral of Scotland. He was a notorious conspirator, who led several uprisings against King James VI and died in poverty, in Italy, after being banished from Scotland. Francis was the first cousin of King James VI of Scotland. Francis's maternal uncle James Hepburn, 4th Earl of Bothwell was the chief suspect in the murder of James VI's father Henry Stuart, Lord Darnley.

Sir Walter Scott, 1st of Branxholme, 3rd of Buccleuch, known as "Wicked Wat", was a nobleman of the Scottish Borders and the chief of Clan Scott who briefly served as Warden of the Middle March He was an "inveterate English hater" active in the wars known as The Rough Wooing and a noted Border reiver. He was killed on Edinburgh High Street in a feud with Clan Kerr in 1552. His great-grandson was Sir Walter Scott, 1st Lord Scott of Buccleuch, the "Bold Buccleuch" (1565–1611), a border reiver famed for his role in the rescue of Kinmont Willie Armstrong. 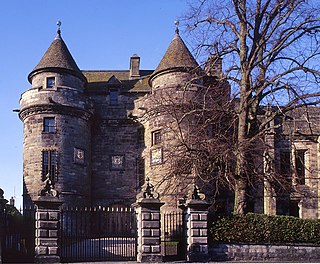 Walter Scott of Harden, also known as Auld Wat, was a notorious border reiver along the Anglo-Scottish border in the 16th century. 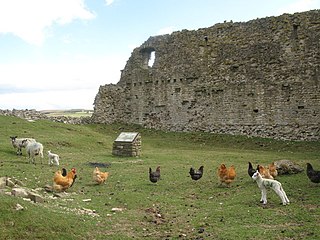