Wamos Air, formerly Pullmantur Air, is a Spanish airline headquartered in Madrid. [2] It mostly operates leisure charter flights, several of them on behalf of sister company Pullmantur Cruises from its main base at Adolfo Suárez Madrid–Barajas Airport. As of 2016 [update] , it is 81% owned by Springwater Capital and 19% owned by Royal Caribbean Cruises. [3] The British Government charted a Wamos Air 747 multiple times to repatriate British citizens in Wuhan, China and Japan during the COVID-19 pandemic.

As of December 2019, Wamos Air offers scheduled flights under its own brand name to the following destinations: [4]

As of December 2020, the Wamos Air fleet consists of the following aircraft: [6] 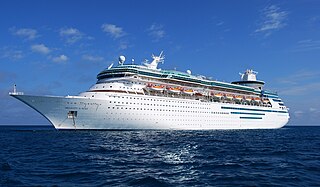 Majesty is a Sovereign-class cruise ship formerly owned by Royal Caribbean Cruises Ltd and previously operated by Royal Caribbean International. She was built at the Chantiers de l'Atlantique shipyards in Saint-Nazaire, France, and placed in service on 26 April 1992. Her Godmother is Queen Sonja of Norway. As of 2021, she is the only Sovereign-class ship still in active service.

Compañía Boliviana de Transporte Aéreo Privado Aerosur, S.A. was a privately owned airline from Bolivia, which served as the country's flag carrier since 1998, along with state-owned Boliviana de Aviación. Headquartered in Santa Cruz de la Sierra, it operated a network of domestic and international scheduled passenger flights with its hub at the city's Viru Viru International Airport. As of 2010, the airline had 1200 employees.

MS Monarch was the second of three Sovereign-class cruise ships owned by Royal Caribbean International. As of April 1, 2013, Monarch is operated by RCCL's Pullmantur Cruises brand. It was built in 1991 at the Chantiers de l'Atlantique shipyards in Saint-Nazaire, France. 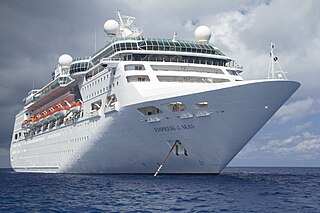 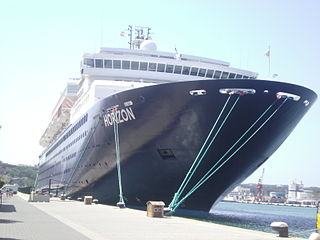 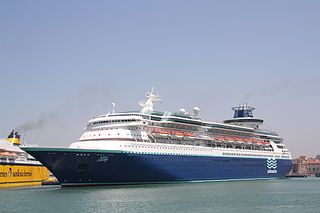 MS Sovereign was one of three large cruise ships of the Sovereign class operated by Pullmantur Cruises and formerly by Royal Caribbean International. On 24 June 2020 Sovereign arrived and was beached at Aliağa, Turkey, where she was dismantled. 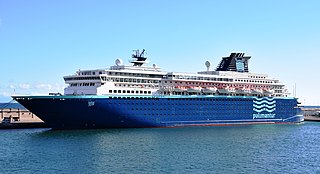 The Zenith is a cruise ship operating with Peace Boat since early 2020. She was built in 1992 by Meyer Werft, Papenburg, Germany for Celebrity Cruises.

Pullmantur Cruises was a cruise line headquartered in Madrid, Spain. It began operations in the late 1990s as an offshoot of the Madrid-based travel agency Pullmantur. In 2006, Pullmantur Cruises, through its parent company, was purchased by U.S.-based Royal Caribbean Group, but Royal Caribbean later sold a 51% stake in the cruise line to Spain-based investment firm Springwater Capital, retaining a 49% stake.

CDF Croisières de France was a cruise line that catered to the French cruise market, with French as the primary language used on board. CDF was a subsidiary of Pullmantur Cruises, and offered cruises to the Mediterranean operating from mid-March until November. Most CDF cruises were all inclusive. in many, but not all cases, the price included airfare. However, cruises could be purchased without airfare as well. CDF ceased operations in 2017.

Aura Airlines SL is a Spanish airline based at Adolfo Suárez Madrid–Barajas Airport. Owned by tour operator Gowaii, it operates charter flights in Europe and offers ACMI leases to other airlines.