Wan Chun Cheng or Zheng Wanjun (Chinese :郑万钧; pinyin :Zhèng Wànjūn, 1908–1987) [1] was a Chinese botanist. Initially one of the Chinese plant collectors who followed in the wake of the Europeans after 1920, he became one of the world's leading authorities on the taxonomy of gymnosperms. Working at the National Central University in Nanjing, he was instrumental in the identification in 1944 of the dawn redwood, Metasequoia glyptostroboides previously known only from fossils. [2] The plant Juniperus chengii is named in his honour.

The standard author abbreviation W.C.Cheng is used to indicate this person as the author when citing a botanical name. [3] 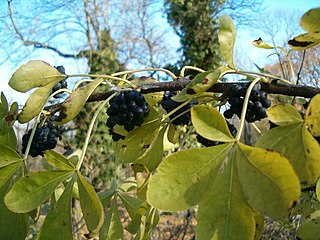 Eleutherococcus is a genus of 38 species of thorny shrubs and trees in the family Araliaceae. They are native to eastern Asia, from southeast Siberia and Japan to the Philippines and Vietnam. 18 species come from China, from central to western parts.

Dennstaedtia is a mostly tropical and subtropical genus of ferns described as a genus in 1801. Hayscented fern, or Cup ferns, are common names for some species in this genus. Its best-known member is probably the temperate North-American hay-scented fern, Dennstaedtia punctilobula, which forms extensive clonal ground-cover colonies on level surfaces in the Appalachian area. 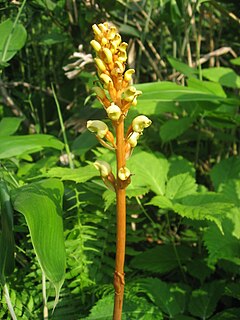 Gastrodia elata is a saprophytic perennial herb in the family Orchidaceae. It is found in Nepal, Bhutan, India, Japan, North Korea, Siberia, Taiwan, and China. 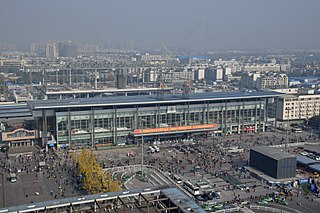 Shanweiniao is a genus of long-snouted enantiornithean birds from Early Cretaceous China. One species is known, Shanweiniao cooperorum. There is one known fossil, a slab and counterslab. The fossil is in the collection of the Dalian Natural History Museum, and has accession number DNHM D1878/1 and DNHM1878/2. It was collected from the Lower Cretaceous Dawangzhengzi Beds, middle Yixian Formation, from Lingyuan in the Liaoning Province, China.

Jisaburo Ohwi was Japanese botanist. He was a distinguished member of the Faculty of Science of Kyoto Imperial University. He is perhaps best known for his 1953 Flora of Japan.

The Tiaojishan Formation is a geological formation in Hebei and Liaoning, People's Republic of China, dating to the middle-late Jurassic period. It is known for its exceptionally preserved fossils, including those of plants, insects and vertebrates. It is made up mainly of pyroclastic rock interspersed with basic volcanic and sedimentary rocks. Previously, the Tiaojishan Formation was grouped together with the underlying Haifanggou Formation as a single "Lanqi Formation." The Tiaojishan Formation forms a key part of the Yanliao Biota assemblage.

Shaanbeikannemeyeria is an extinct genus of dicynodont known from the Early Triassic of China. It contains a single species, S. xilougoensis, which was described in 1980 by Zheng-Wu Cheng from a skull catalogued as IGCAGS V315. The specimen was lost, and a neotype skull IVPP V 11674 was later designated. A second species, S. buergondia, was named by Jin-Lin Li in 1980 from a partial skeleton, but it has since been regarded as a synonym of S. xilougoensis.

Gaultheria nummularioides is a species of plant in the family Ericaceae. It is distributed across India, Myanmar, Nepal, Bhutan, Indonesia, and Southwest China. The plant grows in areas between 1,700 and 3,000 m above sea level, and grows better on rocky mountainsides and weed tree forests. This species has been cultivated as an ornamental in Britain, the United States, and elsewhere for some decades.

The Tale of Li Wa is a short novella by Bai Xingjian. 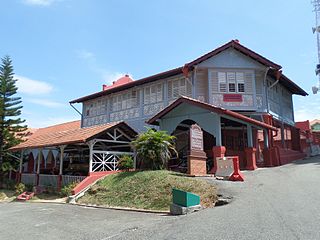 The Gallery of Admiral Cheng Ho is a gallery devoted to Zheng He in Malacca City, Malacca, Malaysia. It was opened in February 2003 and has been associated with the growth of tourism within the state. The gallery displays Zheng He's journey to Southeast Asia and his great legacy in international relations where he established the great affiliations between Ming Dynasty and African and Asian countries leading to prosperous and fair trade among them.

Boltonia lautureana is an East Asian species of plants in the family Asteraceae. It is native to China, Japan, Korea, and Asiatic Russia.

Prunus pseudocerasus or Prunus pseudo-cerasus, the Chinese sour cherry or just Chinese cherry, is a species of cherry native to China and is used worldwide as an ornamental for its early spring cherry blossoms. The fruits of some cultivars are edible.

Dischidia tonkinensis is an epiphytic plant in the genus Dischidia. It is distributed mainly in the south China provinces of Yunnan, Guangxi, and Guizhou, at altitudes of 300 to 1,200 m above sea level. It normally grows in mountain forests and on rocks. Dischidia esquirolii is a synonym. It has not been cultivated.

Cirsium hosokawai is a flowering plant of the family Asteraceae endemic to Taiwan and found in alpine meadows above 3,500 meters in elevation.

Cirsium kawakamii is a flowering plant in the family Asteraceae. In Chinese, it is known as the Yushan thistle, named for Yushan. 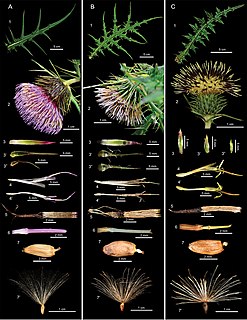 Cirsium arisanense is an endemic flowering plant of Taiwan within the family Asteraceae. Its common name in Chinese, the Alishan thistle, as well as its species name, refer to the Alishan Range. C. arisanense grows at an elevation of 2,300 meters, near mountain summits.

Polygonatum arisanense is a flowering plant within the Asparagaceae family. The species is endemic to Taiwan and is found in areas around 1,500 meters in elevation. Its Chinese common name and species name refer to the Alishan Range. 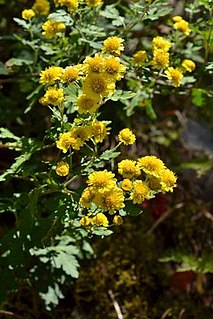 Chrysanthemum arisanense is a flowering pant within the Asteraceae family. It is also known as Dendranthema arisanense. Both species names and its two Chinese common names refer to the Alishan Range C. arisanense is endemic to Taiwan and is found at elevations between 1,600 and 3,200 meters.