In addition to the artistic talent in which continues to be held in high esteem in modern China, he has been and remains an influential figure in East Asian calligraphy, particularly Japanese calligraphy.

His tomb was severely damaged during the Cultural Revolution.

Born in Linyi, Shandong, Wang belonged to the powerful and prominent Wang clan of Langya. In his youth, the War of the Eight Princes and subsequent invasions of the Five Barbarians led to turmoil in northern China; as such the ten-year-old Wang Xizhi moved south with his clan, and spent most of his life in present-day Shaoxing, Zhejiang and Wenzhou.

He learned the art of calligraphy from Lady Wei Shuo. He excelled in every script but particularly in semi-cursive script. His representative works include, in chronological order, Narration on Yue Yi (樂毅論), The Yellow Court Classic (黃庭經), Commentaries on the Portrait of Dongfang Shuo (東方朔畫讚), Admonitions to the Emperor from the Imperial Mentor (太師箴), Preface to the Collection of Poems Composed at the Orchid Pavilion (蘭亭集序, also commonly known as Lantingji Xu ), and The Statement of Pledge (告誓文). [2] Unfortunately, none of his original works remains today, and only models of them exist. Samples of Wang's handwriting can also be seen in classical Chinese calligraphy texts such as the Chunhua Imperial Archive of Calligraphy Exemplars (淳化閣帖). [3]

His most noted and famous work is the Preface to the Poems Composed at the Orchid Pavilion, the introduction to a collection of poems written by a number of poets during a gathering at Lanting near the town of Shaoxing for the Spring Purification Festival. The original is lost, but the work survives in a number of finely traced copies, with the earliest and most well regarded copy being the one made between c. 627-650 by Feng Chengsu, and it is located in the Palace Museum in Beijing.

Wang Xizhi is particularly remembered for one of his hobbies, that of rearing geese. Legend has it that he learned that the key to how to turn his wrist whilst writing was to observe how geese moved their necks. There is a small porcelain cup depicting Wang Xizhi "walking geese" in the China Gallery of the Asian Civilisations Museum in Singapore. The other side of the cup depicts a scholar "taking a zither to a friend".

Wang Xizhi had seven children, all of whom were notable calligraphers. The most distinguished was his youngest son, Wang Xianzhi.

In 2010, a small Tang dynasty reproduction of one of Wang's calligraphy scrolls on silk with four lines was sold in China at an auction for ¥308 million RMB ($48 million). [4]

"Ru Mu San Fen" is used to describe strong and powerful calligraphy works , and also to describe profound and thorough understanding of articles or things. The emperor went to the northern suburbs for sacrifice. He asked Wang xizhi to write the blessing words on a piece of wood and then send workers to carve it. The engraver was shocked because Wang xizhi's handwriting penetrated more than a third of the wood. He said admiringly: "the character of the general of the right army is “Ru mu san fen”. [5]

He used to practice writing near the pond, and when he finished, he would wash his brush and ink-stone in the pond. Over time, the water of the whole pond turned black. This shows how much effort he has made into practicing calligraphy. [6]

He loved geese very much. He looked at the geese splashing in the river in a daze. Later, he comprehended the principle of calligraphy from the movements of the geese, which helped his calligraphy skills. [7]

“Mei Zhi Tie”, is a copy featuring 17 characters written by Wang XiZhi. It got its name from the word "meizhi" at the beginning of the article. It was first exhibited in 1973 at the "Showa Lanting Memorial Exhibition". It has two lines and 17 words. The work does not include inscriptions and collection marks. [8]

It was exhibited by the "Chinese and Japanese Calligraphy Treasures Exhibition" on March 12, 2006 in Shanghai. [9]

Year 353 (CCCLIII) was a common year starting on Friday of the Julian calendar. At the time, it was known as the Year of the Consulship of Magnentius and Decentius. The denomination 353 for this year has been used since the early medieval period, when the Anno Domini calendar era became the prevalent method in Europe for naming years. 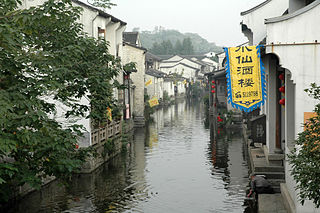 Shaoxing is a prefecture-level city on the southern shore of Hangzhou Bay in eastern Zhejiang province, China. It was formerly known as Kuaiji and Shanyin and abbreviated in Chinese as 越 (Yuè) from the area's former inhabitants. Located on the south bank of the Qiantang River estuary, it borders Ningbo to the east, Taizhou to the southeast, Jinhua to the southwest, and Hangzhou to the west. As of 2010, its population was 4,912,339 inhabitants. Among which, 1,914,683 lived in the built-up metropolitan area of Hangzhou-Shaoxing, with a total of 8,156,154 inhabitants.

Wang Hsing-ching, who has a pseudonym of Nanfang Shuo, is a journalist, political commentator, and cultural critic. Currently, he is the chief editor and writer of The Journalist magazine (新新聞週刊), with commentaries on current issues in major newspapers. He co-founded The Journalist when he was in his 40s. His writings, including Western ideas analysis, social phenomena criticism, and literature comments, are all regarded as very influential. Crediting his intellectual contribution to the society, he is known as "the most industrious private scholar in Taiwan".

The Lantingji Xu or Lanting Xu, is a piece of Chinese calligraphy work generally considered to be written by the well-known calligrapher Wang Xizhi from the East Jin Dynasty.

Wang Can (177–217), courtesy name Zhongxuan, was a Chinese politician and poet who lived during the late Eastern Han dynasty of China. He contributed greatly to the establishment of laws and standards during the founding days of the vassal kingdom of Wei – the forerunner of the state of Cao Wei in the Three Kingdoms period – under the warlord Cao Cao, who was the de facto head of the Han central government in the final years of the Eastern Han dynasty. For his literary achievements, Wang Can was ranked among the Seven Scholars of Jian'an. 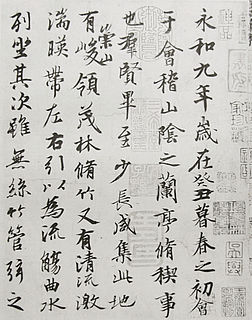 Semi-cursive script is a style of calligraphy which emerged in China during the Han dynasty. The style is used to write Chinese characters and is abbreviated slightly where a character’s strokes are permitted to be visibly connected as the writer writes, but not to the extent of the cursive style. This makes the style easily readable by readers who can read regular script and quickly writable by calligraphers who require ideas to be written down quickly. Chinese calligraphy is written using the Four Treasure of the Study, the writing brush, ink, ink stone and paper. Though the semi-cursive style is not taught to students officially, it is a popular style used in modern handwriting. In order to produce legible work using the semi-cursive style, a series of writing conventions are followed, including the linking of the strokes, simplification and merging strokes, adjustments to stroke order and the distribution of text of the work. 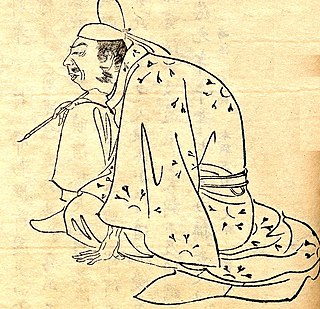 The Double Third Festival or Shangsi Festival is an East Asian festival originating from China. The 2021 date is April 14.

Wang Bo, courtesy name Zi'an (子安), was a Tang dynasty Chinese poet, traditionally grouped together with Luo Binwang, Lu Zhaolin, and Yang Jiong as the Four Paragons of the Early Tang. He died at the age of 26, possibly from drowning, while going back from Jiaozhi after meeting his father. 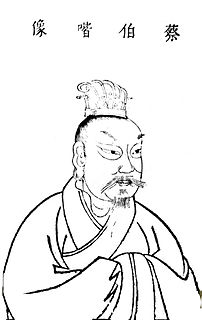 Cai Yong, courtesy name Bojie, was Chinese astronomer, calligrapher, historian, mathematician, musician, politician, and writer of the Eastern Han dynasty. He was well-versed in calligraphy, music, mathematics and astronomy. One of his daughters, Cai Yan / Cai Wenji, was also a famous poet and musician. 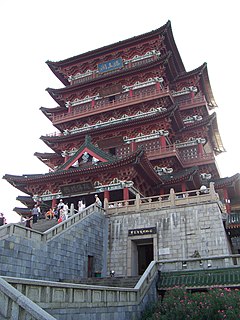 The Pavilion of Prince Teng is a building in the north west of the city of Nanchang, in Jiangxi province, China, on the east bank of the Gan River and is one of the Three Great Towers of southern China. The other two are the Yueyang Tower and the Yellow Crane Pavilion. It has been destroyed and rebuilt many times over its history. The present building was rebuilt in 1989 on the original site. The rebuilding plan was devised by the architect Liang Sicheng, and now the Pavilion of Prince Teng is the landmark of Nanchang. There are nine floors in total. The main architectural structure is in Song dynasty wooden style, showing the magnificence of the Pavilion.

The Orchid Pavilion Gathering of 353 CE, also known as the Lanting Gathering, was a cultural and poetic event during the Six Dynasties era, in China. This event itself has a certain inherent and poetic interest in regard to the development of landscape poetry and the philosophical ideas of Zhuangzi. The gathering at the Orchid Pavilion is also famous for the artistry of the calligraphy of Wang Xizhi, who was both one of the participants as well as the author and calligrapher of the Lantingji Xu. Sun Chuo also wrote a preface, which is somewhat less famous.

Zhu Changfang, also known as the Jingyi Taoist was the last Prince of Lu (潞王). Zhu Chanfang was an important member of the Imperial family of the Southern Ming dynasty during the Ming-Qing Transition. Zhu Changfang is notable both due to his historical political role and as a creative artist.