Wangkui County (simplified Chinese :望奎县; traditional Chinese :望奎縣; pinyin :Wàngkuí Xiàn) is a county of western Heilongjiang province, People's Republic of China. It is under the jurisdiction of the prefecture-level city of Suihua. 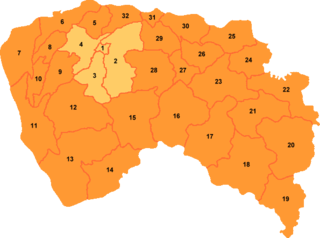 Wangniudun is a town under the direct administration of Dongguan City in the Pearl River Delta, Guangdong province. Its hukou population is 44,600, but the total population is 90,800, residing in an area of 31.57 km2 (12.19 sq mi). It lies 10 kilometres (6.2 mi) northwest of the urban centre of Dongguan, 40 km (25 mi) south of Guangzhou, and 90 km (56 mi) north of Shenzhen. The G4 Beijing–Hong Kong–Macau Expressway, China National Highway 107, Dongguan Ring Road (东莞市环城路) pass through or near the town.

Kuytun or Kuitun is a county-level city with about 285,000 residents in Ili Kazakh Autonomous Prefecture, Xinjiang, China. Kuitun is located between Wusu and Shihezi on the railway from Ürümqi to Kazakhstan, close to a desert. 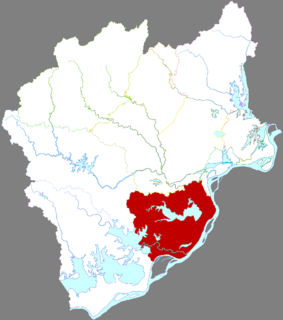 Wangjiang County is a county in the southwest of Anhui Province, situated on the northwest (left) bank of the Yangtze. It is under the jurisdiction of the prefecture-level city of Anqing. It has population of 600,000 and an area of 1,357 km2 (524 sq mi). The ZIP code of Wangjiang is 246200.The government of Wangjiang County is located in Leiyang Town.

Xiangxiang is a county-level city under the administration of Xiangtan, Hunan province, China. Located on Central Hunan and the west of Xiangtan, Xiangxiang is bordered by Ningxiang County and Shaoshan City to the north, Xiangtan County to the east, Shuangfeng County to the south, Louxing District of Loudi City to the west, it has an area of 1,912.7 km2 (738.5 sq mi) with a population of rough 850,000. It has 4 subdistricts, 15 towns and 3 townships under its jurisdiction, the government seat is Wangchunmen (望春门街道).

Pingchang County is a county in the northeast of Sichuan province. It is under the administration of the prefecture-level city of Bazhong. Its area is 2,229 km2 (861 sq mi). The population is 930,000. 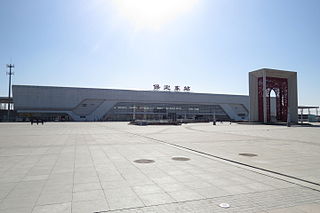 Qingyuan is a district of the city of Baoding, in the central part of Hebei province, China, covering part of the southern and eastern suburbs of Baoding. As of 2006, it has a total population of 620,000 residing in an area of 953 km2 (368 sq mi).

Wangcheng District is one of six urban districts of Changsha, the capital of Hunan province, China. the district is bordered to the north by Miluo City and Xiangyin County of Yueyang, to the west by Heshan District of Yiyang and Ningxiang County, to the south by Yuelu and Kaifu Districts, to the east by Changsha County. Located in the northsouth of the City proper in Changsha, Wangcheng covers 951.06 km2 (367.21 sq mi) with registered population of 560,567 and resident population of 562,100. The district has 10 subdistricts and 5 towns under its jurisdiction, the government seat is at Gaotangling Subdistrict. 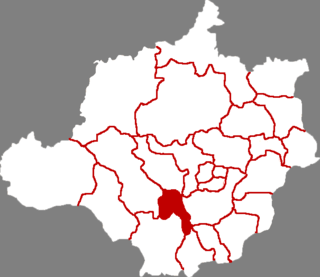 Wangdu is a county of west-central Hebei province, China, directly serviced by China National Highway 107. It is under the jurisdiction of the prefecture-level city of Baoding and has a population of 260,000 residing in an area of 357 km2 (138 sq mi).

Wanghua District, is one of the four districts under the administration of the city of Fushun, Liaoning province, People's Republic of China. The westernmost county-level division of Fushun, it has a population of about 341,000, covering an area of 214 square kilometres (83 sq mi).

Tongjiang may refer to the following locations in China: 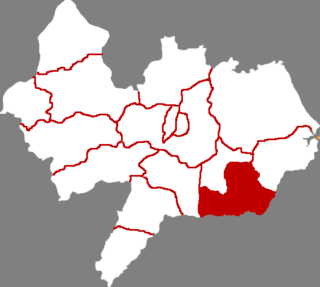 Yanshan County is a county in the east of Hebei province, China, bordering Shandong to the south and east. It is under the administration of Cangzhou City, and it has a population of 410,000 residing in an area of 795 km2 (307 sq mi). China National Highway 205 runs northwest-southeast through the county.

Anhua County is a county in the Province of Hunan, China, it is under the administration of Yiyang Prefecture-level City.

Bukui Mosque is a mosque in Qiqihar, Heilongjiang, China. It is located in Mosque Road off Bukui Street. It was built during the Qing Dynasty, and listed in 2006 as a Major Site to Be Protected for Its Historical and Cultural Value at the National Level. It is the largest and oldest mosque in the province.

The Kuytun–Beitun railway or Kuibei railway is a single-track railway in Xinjiang, China between Kuytun and Beitun. The railway branches from the Northern Xinjiang railway at Kuytun and heads north across the Junggar Basin to Beitun, near Altay, passing through Karamay, Urho, and Fuhai (Burultoqay). The railway is 468.5 km in length The railway opened to freight traffic on December 29, 2009 and passenger traffic on June 1, 2011. 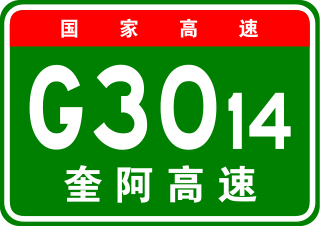 The Kuytun–Altay Expressway, commonly referred to as the Kui'a Expressway, is an expressway that connects the cities of Kuytun and Altay in Xinjiang, China. The expressway is 527 kilometres (327 mi) in length, with a 135-kilometre long (84 mi) section between Kuytun and Karamay that is concurrent with the G3015 Kuytun–Tacheng Expressway. The entire expressway is part of Asian Highway 67.

The Kuytun–Tacheng Expressway, commonly referred to as the Kuita Expressway is an expressway that connects the cities of Kuytun and Tacheng in the Chinese autonomous region of Xinjiang. It is 368 kilometres (229 mi) in length. The expressway is a spur or auxiliary line of the G30 Lianyungang–Khorgas Expressway. In the southeastern end, it connects to the G30 Lianyungang–Khorgas Expressway at Kuytun. In the northwestern end, it terminates at Xinjiang Provincial Highway 221 in Tacheng, close to the Bakhtu border crossing on the China–Kazakhstan border.

Bowang District is a district of the prefecture-level city of Ma'anshan in Anhui province, China. It was created in September 2012 by splitting off the three towns of Bowang, Danyang, and Xinshi from Dangtu County. It governs an area of 351 square kilometres (136 sq mi) and has a total population of 183,500.

Dongsheng Township is a township Wangkui County in west-central Heilongjiang province, China, located 36 kilometres (22 mi) northeast of the county seat. As of 2011, it has 6 villages under its administration.