The centuries-old lyrics are often incomprehensible to modern Japanese (especially to children who are singing it), and others can be quite sinister on close analysis.[ citation needed ] Like many children's songs around the world, because people are used to them from an early age, they are often oblivious to the real meanings.

"Tōryanse" is often played as an electronic tune at pedestrian crossings in Japan to signal when it is safe to cross.

"Tōryanse" (通りゃんせ) is the name of the traditional Japanese children's tune. It is a common choice for music played by traffic lights in Japan when it is safe to cross.

(When infant mortality was high, people traditionally celebrated when a child survived to reach the age of 7. See Shichigosan)

This particular warabe-uta is sung as part of a traditional game identical to "London Bridge Is Falling Down". Two children facing each other link their hands to form an arch 'checkpoint', and the remaining children walk through underneath in a line (and back round again in circles). The child who happens to be under the arch when the song finishes is then 'caught'. 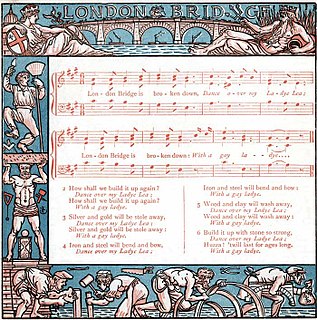 "London Bridge Is Falling Down" is a traditional English nursery rhyme and singing game, which is found in different versions all over the world. It deals with the depredations of London Bridge and attempts, realistic or fanciful, to repair it. It may date back to bridge rhymes and games of the Late Middle Ages, but the earliest records of the rhyme in English are from the seventeenth century. The lyrics were first printed in close to their modern form in the mid-eighteenth century and became popular, particularly in Britain and the United States during the 19th century.

The tune is played at Japanese pedestrian crossings by analogy with this game, i.e., it is safe to cross until the music stops.

A teru teru bōzu is a little traditional hand-made doll which supposedly brings sunshine. "Teru" is a Japanese verb which describes sunshine, and a "bōzu" is a Buddhist monk. Children make teru-teru-bōzu out of tissue paper and a string and hang them from a window to wish for sunny weather. There is a famous warabe uta which is about the small ghost-like dolls which people can see hanging on rainy days.

The lyrics are allegedly about a story of a monk who promised farmers to stop rain and bring clear weather during a prolonged period of rain which was ruining crops. When the monk failed to bring sunshine, he was executed.

Yuki(雪) is a song Japanese children sing when it's snowing and they want to play outside. 'Yuki' means 'Snow' in Japanese. The song is also commonly known as 雪やこんこ (Yuki ya konko) The snow falls densely.

A kotatsu is a low, heated table. In the first stanza, flowers blooming in winter probably refers to the snow collecting on empty branches. The literal translation of the line is something like "No withered trees remaining, flowers bloom". 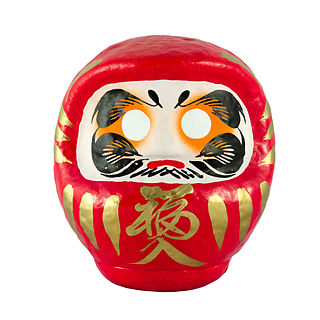 A Daruma doll is a hollow, round, Japanese traditional doll modeled after Bodhidharma, the founder of the Zen tradition of Buddhism. These dolls, though typically red and depicting a bearded man (Bodhidharma), vary greatly in color and design depending on region and artist. Though considered a toy by some, Daruma has a design that is rich in symbolism and is regarded more as a talisman of good luck to the Japanese. Daruma dolls are seen as a symbol of perseverance and good luck, making them a popular gift of encouragement. The doll has also been commercialized by many Buddhist temples to use alongside the setting of goals.

Japanese dolls are one of the traditional Japanese crafts.

Yuki-onna is a spirit or yōkai in Japanese folklore. Her character is often depicted in Japanese literature, films, or animation.

Okinawan music, also known as Ryukyuan music, is the music of the Okinawa Islands of southwestern Japan. In modern times, it may also refer to the musical traditions of Okinawa Prefecture, which also covers the Miyako and Yaeyama Islands, and sometimes the Amami Islands. 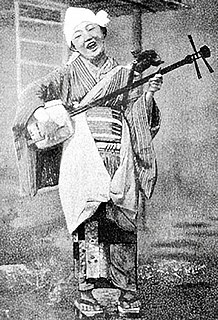 Min'yō (民謡) is a genre of traditional Japanese music. The term is a translation of the German word "Volkslied" and has only been in use since the twentieth century. Japanese traditional designations referring to more or less the same genre include "inaka bushi" "inaka buri", "hina uta" and the like, but for most of the people who sang such songs they were simply "uta" (song). The term min'yō is now sometimes also used to refer to traditional songs of other countries, though a preceding adjective is needed: Furansu min'yō = French folk song; for this reason, many sources in Japanese also feel the need to preface the term with "Nihon": Nihon min'yō = Japanese [traditional] folk song.

"Old MacDonald Had a Farm" is a children's song and nursery rhyme about a farmer named MacDonald and the various animals he keeps on his farm. Each verse of the song changes the name of the animal and its respective noise. In many versions, the song is cumulative, with the animal sounds from all the earlier verses added to each subsequent verse. For example, the verse uses a cow as an animal and "moo" as the animal's sound. It has a Roud Folk Song Index number of 745. 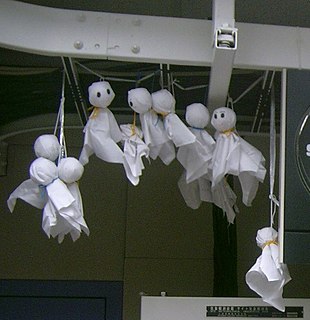 A teru teru bōzu is a small traditional handmade doll made of white paper or cloth that Japanese farmers began hanging outside of their window by a string. In shape and construction they are essentially identical to ghost dolls, such as those made at Halloween. This talisman is supposed to have magical powers to bring good weather and to stop or prevent a rainy day. Teru is a Japanese verb which describes sunshine, and a bōzu is a Buddhist monk, or in modern slang, "bald-headed"; bōzu is also used as a term of endearment for addressing little boys.

Shimpei Nakayama was a Japanese songwriter, famous for his many children's songs and popular songs (ryūkōka) that have become deeply embedded in Japanese popular culture.

"Sing! Aiko" is a radio segment in Aiko's radio program Aiko's @llnightnippon.com, which aired from 1999 until 2003. When musical guests were invited to the program, Aiko would play the piano and cover the guests'—or others'—songs; sometimes, she sang her own songs with her guests. Rarely, Aiko would improvise a short song with a guest.

A snowman is an anthropomorphic snow sculpture often built by children in regions with sufficient snowfall. In many places, typical snowmen consist of three large snowballs of different sizes with some additional accoutrements for facial and other features. Due to the sculptability of snow, there is also a wide variety of other styles. Common accessories include branches for arms and a rudimentary smiley face, with a carrot used for a nose. Clothing, such as a hat or scarf, may be included. Low-cost and availability are the common issues, since snowmen are usually abandoned to the elements once completed.

"The Bear Went Over the Mountain" is a popular children's song often sung to the tune of "For He's a Jolly Good Fellow". The song has been used in play party games. The public domain lyrics are of unknown origin.

The hexagonal snowflake, a crystalline formation of ice, has intrigued people throughout history. This is a chronology of interest and research into snowflakes. Artists, philosophers, and scientists have wondered at their shape, recorded them by hand or in photographs, and attempted to recreate hexagonal snowflakes.

"GIFT" is a triple-single released by the Japanese boyband Kanjani Eight—stylized Kanjani∞. The three singles are the band's 11th, 12th, and 13th singles. The songs were released during the Christmas period. Each single release, except "Green", contains two songs; Green has three songs. Each single has cover art reflecting the color theme of each single. GIFT was advertised as a gift from the group members to their fans. The three singles were sold at a special price of ¥888 and were a limited-press release.

b-flower are a Japanese indie pop band formed in Kyoto, Japan, in the late 1980s. The band would be put under such banners as ネオアコースティック ("Neo-Acoustic") in Japan, which refers to the sound heavily influenced by the British independent music scene of the 1980s, most notably alternative rock. ネオアコ ("Neo-Aco"), as often dubbed, was popular with the country's young generations in the 1990s.

"Tombe la neige" is a French language song written and sung by Belgian-Italian singer Salvatore Adamo. The song was released in 1963 and became an international hit and one of his best-known songs.

Ujō Noguchi was a Japanese poet and lyricist of children's songs and traditional Min'yō folk music. He wrote some of the most beloved and familiar pieces for children and youth choirs, such as "Akai Kutsu ". He, along with Hakushū Kitahara, and Yaso Saijō are considered to be the three great poets and children's songwriters in Japan.

Masaru Kawasaki was a Japanese conductor and composer. He was known for writing original compositions specifically for concert band, as did Toshio Akiyama and Ichitaro Tsujii, but has also written many works for the flute. 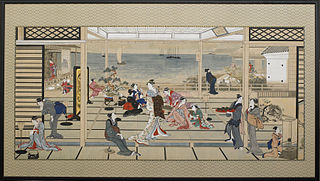