Wards are local entities directly controlled by the municipal government. They handle administrative functions such as koseki registration, health insurance, and property taxation. Many wards have affiliated residents' organizations for a number of tasks, although these do not have any legal authority.

The special wards of Tokyo are not normal wards in the usual sense of the term, but instead an administrative unit governed similar to cities. 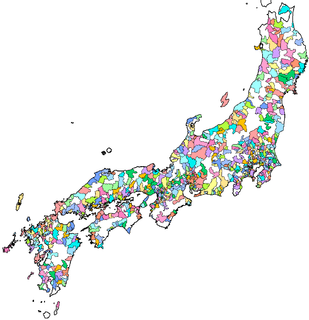 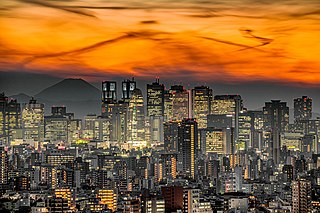 The Local Autonomy Law, passed by the House of Representatives and the House of Peers on March 28, 1947 and promulgated as Law No. 67 of 1947 on April 17, is an Act of devolution that established most of Japan's contemporary local government structures and administrative divisions, including prefectures, municipalities and other entities. On July 16, 1999, the law was amended to eliminate administrative functions imposed upon local governments by the central governments and to establish Committee for Settling National-Local Disputes. To promote decentralization the law and relevant laws have been amended after this revision. 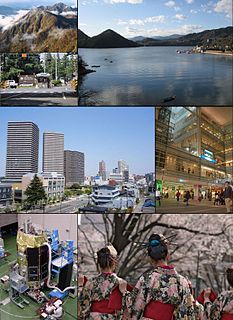 Sagamihara is a city in Kanagawa Prefecture, Japan. As of 1 May 2021, the city has an estimated population of 723,470, with 334,812 households, and a population density of 1,220 persons per km². The total area of the city is 328.91 square kilometres (126.99 sq mi). Sagamihara is the third-most-populous city in the prefecture, after Yokohama and Kawasaki, and the fifth most populous suburb of the Greater Tokyo Area. Its northern neighbor is Machida, with which a cross-prefectural merger has been proposed. 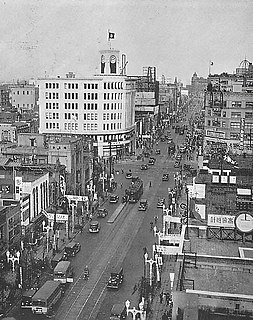 A ward is a local authority area, typically used for electoral purposes. In some countries, wards are usually named after neighbourhoods, thoroughfares, parishes, landmarks, geographical features and in some cases historical figures connected to the area. It is common in the United States for wards to simply be numbered.

Politics of Osaka City, as in all municipalities of Japan, takes place in the framework of local autonomy that is guaranteed by chapter 8 of the Constitution and laid out in the Local Autonomy Law. As one of Japan's 20 major cities designated by government ordinance, Osaka City has some administrative responsibilities that are handled by the prefectures in ordinary municipalities and is subdivided into wards.