Warham was probably born in 1525 in England, the second son of Sir Anthony St Leger and his wife Agnes Warham. His father would be appointed Lord Deputy of Ireland in 1540. His father's family was from Ulcombe, Kent. His mother was a daughter of Sir Hugh Warham, a brother of William Warham, archbishop of Canterbury.

His father disinherited his eldest brother William due to his dissolute lifestyle; the third brother, Anthony, would be made Master of the Rolls in Ireland in 1593. Warham served in Protector Somerset's invasion of Scotland in 1547 as he was a prisoner there until January 1550, when he was ransomed. In 1553 he fought against supporters of Wyatt's rebellion in Kent, and he may have served in Ireland under his father during Mary's reign. About 1559 he was named a commissioner to transfer to England John Bale's manuscripts and books. In 1560 he was High Sheriff of Kent. He was soon a member of the Privy Council of Ireland, and in July 1565 he was knighted. Queen Elizabeth had decided to establish a presidential government in Munster, and in January 1566 St Leger was nominated President of Munster, but locally by Sir Henry Sidney, the Lord Deputy of Ireland; he received instructions dated 1 February, and in the following month was given command of all the levies in Munster. Elizabeth, however, refused to confirm St Leger's appointment. The reason was that St Leger was a bitter enemy of Thomas Butler, 10th Earl of Ormond, who was a cousin of the Queen on the Boleyn side of her family, and correspondingly friendly with Gerald FitzGerald, 14th Earl of Desmond; and the queen accused St Leger of lukewarmness in arresting Desmond early in 1565. St Leger was consequently recalled, and in November 1568 Sir John Perrot became president of Munster.

Warham and Ursula had five sons and four daughters, including: [4] [5]

His father died in 1559 and Warham inherited. He gave his brother William the manors of Bilsington and Belgar in Kent as a gest of goodwill. [10]

In 1569 St Leger returned to England, residing at his house in Southwark or at Leeds Castle, Kent, and serving as High Sheriff of Kent for 1560. There from 1570 to 1572 he had custody of Desmond and his family (see Desmond Rebellions). He left his wife at Carrigaline, County Cork, a manor he held from Desmond; during his absence it was ravaged by the rebels.

He remained in England until 1579, when his repeated petitions for employment and reward were answered by his appointment as provost-marshal of Munster, a new office, the functions of which seem to have been purely military. In this capacity St Leger was actively engaged against the Irish rebels for ten years. On 7 April 1583 he was appointed an assistant to the court of high commission in Ireland, and in the following year he visited England. While there he accused Ormond of treason, and laid before the queen proposals for the government of Ireland. In 1585 he was elected to the Irish House of Commons as MP for Queen's County. In November 1589 he was succeeded, probably on account of his old age, as provost-marshal by George Thornton, but in 1590 he was governing Munster in the absence of the vice-president. He was in England again in 1594, and died at Cork in 1597. His will is in the Heralds' College, London. He had literary interests, being a friend of Edmund Spenser and Lodowick Bryskett, and was one of the friends to whom Spenser confided his project of writing The Faerie Queene .

The Warham St Leger who died in combat in 1600 against Hugh Maguire (Lord of Fermanagh) was his nephew, the son of his brother William. 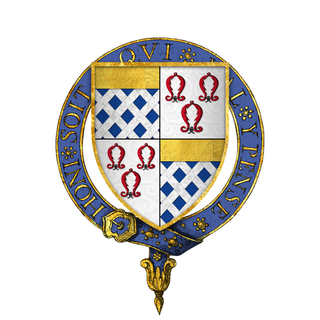 Sir William St LegerPC (Ire) (1586–1642) was an Anglo-Irish landowner, administrator, and soldier. He fought the Spanish in the Netherlands defending Bergen op Zoom in 1622. He was MP for Cork County in two Irish parliaments. He was Lord President of Munster and fought the insurgents in Munster during the Irish Rebellion of 1641 before dying in 1642.

The St. Leger family is an old Anglo-Irish family with Norman roots, that in some cases transformed into Selinger or Sellinger. It is first recorded in England as lord of the manor of Ulcombe in Kent. John St. Leger of Ulcombe was Sheriff of Kent in 1430.

James fitz Maurice FitzGerald, called "fitz Maurice", was captain-general of Desmond while Gerald FitzGerald, 14th Earl of Desmond, was detained in England by Queen Elizabeth I after the Battle of Affane in 1565. He led the first Desmond Rebellion in 1569 and was sometimes called "Archtraitor" by the English. He surrendered in 1573, prostrating himself in Kilmallock church before John Perrot, president of Munster.

Events from the year 1582 in Ireland.

William Horsemonden-Turner was an English attorney and Whig Member of Parliament. 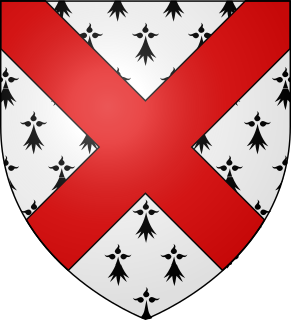 James fitz John FitzGerald, 13th Earl of Desmond, also counted as the 14th, owned large parts of the Irish province of Munster. He was appointed Lord Treasurer of Ireland in 1547.

Sir Anthony St Leger (c.1535–1613) was an English-born judge in Ireland of the later Tudor and Stuart eras. He held the office of Master of the Rolls in Ireland.

Ralph St Leger of Ulcombe in Kent was Sheriff of Kent in 1467/8 and was constable of Leeds Castle in Kent. He was a member of the St Leger family.

Sir John St Leger (1674–1743) was an Irish barrister, politician and judge. He belonged to a prominent aristocratic family from County Cork. He was not highly regarded for his legal ability, and it was believed by his contemporaries that he owed his professional success to his influential family connections. As a judge he is mainly remembered for hearing, with two of his colleagues, the celebrated case of Sherlock v. Annesley, which caused a major Constitutional crisis, and led to the three judges being briefly imprisoned.