Warmian-Masurian Voivodeship or Warmia-Masuria Province [2] or Warmia-Mazury Province (in Polish : Województwo warmińsko-mazurskie, [[Help:IPA/Polish|[vɔjɛˈvut͡stfɔ var]] ˈmiɲskɔ maˈzurskʲɛ] is a voivodeship (province) in northeastern Poland. Its capital and largest city is Olsztyn. The voivodeship has an area of 24,192 km2 (9,341 sq mi) and a population of 1,425,967 (as of 2019).

The Warmian-Masurian Voivodeship was created on 1 January 1999, from the entire Olsztyn Voivodeship, the western half of Suwałki Voivodeship and part of Elbląg Voivodeship, pursuant to the Polish local government reforms adopted in 1998. The province's name derives from two historic regions, Warmia and Masuria.

The region was originally inhabited by the Old Prussian clan of the Warmians from whom the name Warmia originated. During the northern Crusade, the Old Prussians were conquered by the Teutonic Order and their land was granted to the order by the pope and the region became part of the State of the Teutonic Order. The Order encouraged the colonization by German settlers in Warmia (Ostsiedlung) and Polish colonists from the region of Masovia, called Masurians (Mazurzy), hence the name Masuria. The Old Prussians became assimilated into the newcomers and thus became extinct.

During the Teutonic rule, the region experienced a process of urbanization and economic boost due to the expansion of the Hanseatic League into the region. The Order later attacked their former ally Poland and conquered the region of Pomerelia, thus entered a long-lasting conflict with Poland, which subsequently entered an alliance with Lithuania. In Masuria, the Poles and Lithuanians defeated the Order at the Battle of Grunwald. The wars finally resulted in a rebellion of the urban population of Pomerelia and Warmia, who were affected by the Teuton's numerous wars; upon their request the region was incorporated to Poland by King Casimir IV Jagiellon, and after the Thirteen Years' War it remained under Polish suzerainty, but was divided into two parts: Elbląg and Warmia were incorporated directly into the Kingdom of Poland, Masuria became a Polish fief under the control of the Teutonic Order.

The state of the Teutonic Order ceased to exist in 1525 when Grandmaster Albert Hohenzollern introduced secularisation, proclaimed the Duchy of Prussia and became a vassal of Sigismund I of Poland. The Prussian line of Hohenzollern was extinct by 1618 with the death of Albert Frederick and the Duchy was inherited by the Brandenburgian line; Prussia simultaneously entered a personal union with the electorate of Brandenburg known as Brandenburg-Prussia, remaining under Polish suzerainty until the Treaty of Oliva in 1660. The throne was inherited by Frederick I of Prussia who wanted to unite the Duchy with Brandenburg and also wanted to proclaim himself king of Prussia and therefore participated in the Russian-initiated Partitions of Poland in which Warmia was annexed by the Kingdom of Prussia, and henceforth became part of the newly established province of East Prussia until 1945. Together with the rest of the Kingdom, the region became part of the North German Confederation, the German Empire, the Weimar Republic, and Nazi Germany. After the end of World War II, both the German as well as the Slavic Masurian population were expelled by the Polish government. In 1914, the province turned into a battlefield, seeing notable battles such as the Battle of Tannenberg as part of the Eastern Front of World War I.

Amongst the most visited sights is the Masurian Lake District, which contains more than 2,000 lakes, including the largest lakes of Poland, Śniardwy and Mamry. Other recognizable landmarks are the Warmian castles (Lidzbark Warmiński Castle, Pieniężno Castle, Olsztyn Castle) and the Cathedral Hill in Frombork, where Polish astronomer Nicolaus Copernicus lived and worked. The Lidzbark Warmiński Castle was later the residence of Ignacy Krasicki, nicknamed the Prince of Polish Poets. The Grunwald battlefield in Masuria is site of the annual reenactment of one of the largest battles of Medieval Europe. Święta Lipka in Masuria and Gietrzwałd in Warmia are popular pilgrimage sites.

The Warmian-Masurian Voivodeship has the largest number of ethnic Ukrainians living in Poland [3] due to forced relocations (such as Operation Vistula) carried out by the Soviet and Polish Communist authorities.

In year 1824, shortly before its merger with West Prussia, the population of East Prussia was 1,080,000 people. [4] Of that number, according to Karl Andree, Germans were slightly more than half, while 280,000 (~26%) were ethnically Polish and 200,000 (~19%) were ethnically Lithuanian. [5] As of year 1819 there were also 20,000 strong ethnic Kursenieki and Latvian minorities as well as 2,400 Jews, according to Georg Hassel. [6] Similar numbers are given by August von Haxthausen in his 1839 book, with a breakdown by county. [7] However, the majority of East Prussian Polish and Lithuanian inhabitants were Lutherans, not Roman Catholics like their ethnic kinsmen across the border in the Russian Empire. Only in Southern Warmia (German: Ermland) Catholic Poles – so called Warmiaks (not to be confused with predominantly Protestant Masurians) – comprised the majority of population, numbering 26,067 people (~81%) in county Allenstein (Polish: Olsztyn) in 1837. [7] Another minority in 19th-century East Prussia, were ethnically Russian Old Believers, also known as Philipponnen – their main town was Eckersdorf (Wojnowo). [8] [9] [10]

The Voivodeship contains 50 cities and towns. These are listed below in descending order of population (according to official figures for 2019): [12]

Warmian-Masurian Voivodeship is divided into 21 counties (powiaty): 2 city counties and 19 land counties. These are further divided into 116 gminas.

Palaces and Gothic castles, former seats of the Teutonic Order, seats of Chapter houses and bishops provide a number of attractions for tourists. Gothic churches such as the Archcathedral of Frombork and the collegiate church in Dobre Miasto, as well as churches in Orneta and Kętrzyn delight visitors with the uniqueness of their architectonic details. In collections of the Warmia and Mazury Museum in Olsztyn, visitors can find numerous tokens from the time when Nicolaus Copernicus lived in Warmia. [13]

Protected areas in Warmian-Masurian Voivodeship include eight areas designated as Landscape Parks, as listed below:

The Łuknajno Lake nature reserve (part of Masurian Landscape Park) is a protected wetland site under the Ramsar convention, as well as being designated by UNESCO as a biosphere reserve.

The Warmian-Masurian Voivodeship is twinned with:

Masuria is a historical region in northeastern Poland, famous for its 2,000 lakes. Masuria occupies much of the Masurian Lake District. Administratively, it is part of the Warmian-Masurian Voivodeship. Its biggest city, often regarded as its capital, is Ełk (Elk). The region covers a territory of some 10,000 km2 which is inhabited by approximately 500,000 people. 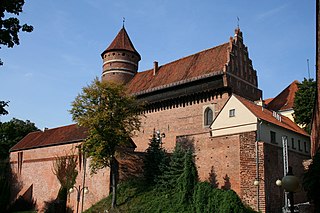 Olsztyn is a city on the Łyna River in northern Poland. Olsztyn is the capital of the Warmian-Masurian Voivodeship, and is a city with county rights. The population of the city was estimated at 171,979 residents in 2019. 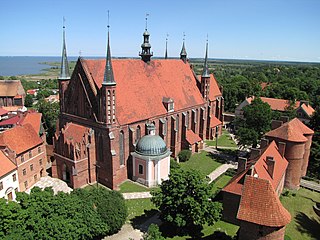 Frombork is a town in northern Poland, situated on the Vistula Lagoon in Braniewo County, within Warmian-Masurian Voivodeship. It had a population of 2,415 as of 2016.

Bartoszyce is a town on the Łyna River in northeastern Poland, with 23,482 inhabitants. It is the capital of Bartoszyce County within the Warmian-Masurian Voivodeship. 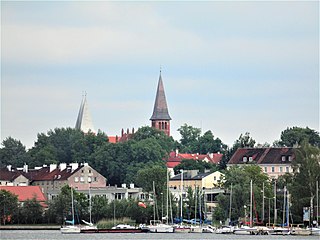 Ostróda is a town in northern Poland, in the historic region of Masuria. It is the seat of the Ostróda County within the Warmian-Masurian Voivodeship and has approximately 33,191 inhabitants (2009). 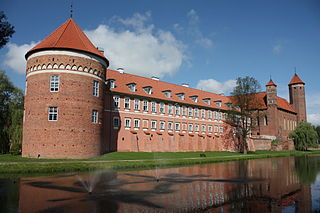 Lidzbark Warmiński, often shortened to Lidzbark, is a historical town located within the Warmian-Masurian Voivodeship, in northern Poland. It is the capital of Lidzbark County. 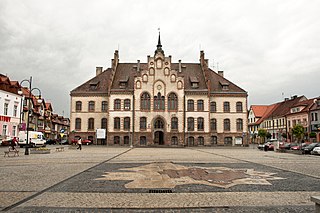 Pisz is a historic town in the Warmian-Masurian Voivodeship in northern Poland, with a population of 19,466 (2016). It is the seat of Pisz County. Pisz is situated at the junction of Lake Roś and the Pisa River, in the region of Masuria.

Pieniężno is a town in northern Poland, located on the Wałsza River in Warmia, in the Warmian-Masurian Voivodeship. It is located in Braniewo County and had a population of 2,975 in 2004.

The Masurian Lake District or Masurian Lakeland is a lake district in northeastern Poland within the geographical region of Masuria, in the past inhabited by Masurians who spoke the Masurian dialect. It contains more than 2,000 lakes. The district had been elected as one of the 28 finalists of the New 7 Wonders of Nature.

Bogatyńskie is a village in the administrative district of Gmina Orneta, within Lidzbark County, Warmian-Masurian Voivodeship, in northern Poland. It lies approximately 4 kilometres (2 mi) south-west of Orneta, 33 km (21 mi) west of Lidzbark Warmiński, and 45 km (28 mi) north-west of the regional capital Olsztyn. 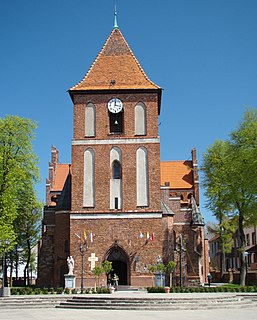 Pogesanians were one of the eleven Prussian clans mentioned by Peter von Dusburg. The clan lived in Pogesania, a small territory stretched between the Elbląg and Pasłęka rivers. It is now located in the Warmian-Masurian Voivodeship, northern Poland. Pogesanians, as the rest of the Prussians, were conquered by the Teutonic Knights and became Germanized or Polonized. The old Prussian language became extinct sometime in the 17th century.

This is a list of German language place names in Poland, now exonyms for towns and villages in the Warmia Region of the Warmian-Masurian Voivodeship.

The Lidzbark Castle, officially known as Lidzbark Bishops' Castle, is a fortified castle and palace from the 14th century located in the town of Lidzbark Warmiński, Warmian-Masurian Voivodeship, in northern Poland. It is one of the most precious Gothic structures in the country and a popular destination for holidaymakers.

Jerzy Sikorski is a Polish historian, Copernicologist, medievalist, museologist, author, publisher, journalist, and encyclopedist, who writes and publishes primarily in Polish. He is a resident of Olsztyn, Poland. 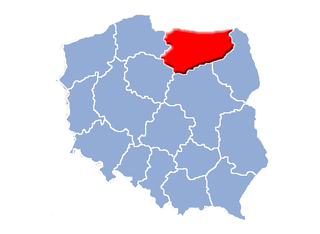 IV liga Warmia-Masuria group is one of the groups of IV liga, the 5th level of Polish football league system. The league was created in season 2000–2001 after introducing new administrative division of Poland. Until the end of the 2007/08 season IV liga was placed at 4th tier of league system but this was changed with the formation of the Ekstraklasa as the top-level league in Poland.
The clubs from Warmian-Masurian Voivodeship compete in this group. The winner of the league is promoted to III liga group I. The bottom teams are relegated to the groups of Liga okręgowa from Warmian-Masurian Voivodeship. These groups are Warmia-Masuria I and Warmia-Masuria II.