The Warner and Swasey Observatory is the astronomical observatory of Case Western Reserve University. Named after Worcester R. Warner and Ambrose Swasey, who built it at the beginning of the 20th century, it was initially located on Taylor Road in East Cleveland, Ohio, USA. The observatory, which at that time housed a 9.5-inch (24 cm) refractor, was donated in 1919 to the Case School of Applied Science. The newer 24-inch (61 cm) Burrell Schmidt telescope was built in 1939.

Due to rising light pollution in Cleveland, a new station in Geauga County's Montville Township was established in 1950s. Named after Jason John Nassau, the station initially housed the Burrell telescope, which was later moved to Kitt Peak National Observatory. Instead of Burrell the station was equipped with the 36-inch robotic telescope. In 2008 Nassau Station was sold to the Geauga Park District and subsequently incorporated into its Observatory Park.

The observatory currently operates the old 9.5-inch refractor (now known as the rooftop telescope) at the university's University Circle campus, and the Burrell Schmidt telescope at Kitt Peak National Observatory in Arizona. The old site on Taylor Road was sold in 1983.

The observatory was originally built by Worchester R. Warner and Ambrose Swasey, owners of Warner & Swasey Company, which made precision instruments and telescopes in the late 19th and early 20th centuries. They became trustees of the Case School of Applied Science (later renamed to Case Institute of Technology), and built an observatory in East Cleveland, which they gave to the school in 1919. This original observatory building was located on Taylor Road four miles east of the university campus and housed a 9.5-inch refractor, and was dedicated in 1920. The building was designed by the firm of Walker and Weeks. [1] In subsequent years the observatory grew to house several more telescopes and instruments, such as the 24-inch Burrell Schmidt telescope, as well as an astronomical library and public lecture hall. [2]

In the 1950s, it became apparent that the light pollution from Cleveland was beginning to make cutting-edge research impossible from the East Cleveland site. A new site was constructed 30 miles to the east in Geauga County, known today as the Nassau Station, and the Burrell Schmidt telescope was moved to this location. In order to compensate for the move, a 36-inch telescope was soon installed at the Taylor Road facility. [2]

In 1978, the Astronomy Department of Case Western Reserve University made a deal with the Association of Universities for Research in Astronomy (AURA) to build a new observatory at Kitt Peak National Observatory to house the Burrell Schmidt. The telescope was moved from Ohio to Arizona in May 1979, and in 1980 the 36-inch reflector on Taylor Road was moved to the Nassau Station. This meant no further astronomical work was done at the Taylor Road facility, and as a result the faculty and resources of the original observatory were moved to the main campus of Case Western Reserve University in 1982. [2] The Taylor Road facility was sold in 1983, was abandoned, and remained neglected until 2005 when it was sold to a couple who planned to convert the building into a residence. [3] [4] The plans stalled when its new owner was convicted of mortgage fraud and sent to prison in 2007. [5]

The 24-inch Burrell Schmidt Telescope was originally built in 1939 by Warner & Swasey Company of Cleveland, Ohio and was housed at the Taylor Road facility. [6] It is currently housed at Kitt Peak National Observatory near Tucson, Arizona. The telescope recently had its optics upgraded with a very wide field of view CCD array, which is much more sensitive than the photographic plates. It is the instrument used today by the Case astronomers. [7]

The Nassau Station, originally constructed in the 1950s, currently houses a 36-inch reflecting telescope. It is named after observatory director Jason John Nassau, who was a prominent astronomer at the time. [8] Work was carried out in the 1990s to make the telescope capable of remote viewing, making it one of the first telescopes to be used in this manner. [9] However, it was seldom used by Case astronomers due to increased light pollution from Cleveland and the enhanced capabilities of the Burrell Schmidt. As a result, the observatory was left unused for several years until 2008, when it was sold to the Geauga Park District. [10] The park district reopened the facility as part of its Observatory Park on June 16, 2012. [11] [12] The park was designated as a dark sky park by the International Dark Sky Association. [13]

The Rooftop Telescope is a 9.5-inch refractor that was originally constructed in 1894 by Warner and Swasey for their own use. [3] The telescope was the first instrument of the Warner and Swasey Observatory and was originally used at the Taylor Road facility, but was put into storage when the Astronomy Department of Case Western Reserve University was relocated to the A. W. Smith building on the main campus. In 1986 the telescope was reinstalled in a new dome on the roof of the A. W. Smith building. [14]

The telescope remains in excellent condition today and is available for use by all students, faculty, and staff at CWRU once they go through a seminar on proper telescope use. [14] It is also often used for public observing nights by the university's Physics and Astronomy Club.

Observers using the Warner and Swasey Observatory have made important contributions to astronomical research. An early example is work carried out by the observatory's then director, Jason Nassau, on the classification of carbon stars and M-type stars in 1949; [15] more recently, observations made using the Burrell Schmidt telescope led to the discovery of the galaxy Andromeda VIII in 2003. This galaxy orbits the more famous Andromeda Galaxy, and was previously undiscovered due to its position in front of the bright disk of the parent galaxy. [16] The Burrell Schmidt has also recently been used to image the intracluster light in the Virgo Cluster. The intracluster light is a thousand times fainter than the night sky, and was observed after combining seventy images of the cluster which were taken with the Burrell Schmidt telescope. [17]

The Kitt Peak National Observatory (KPNO) is a United States astronomical observatory located on Kitt Peak of the Quinlan Mountains in the Arizona-Sonoran Desert on the Tohono O'odham Nation, 88 kilometers (55 mi) west-southwest of Tucson, Arizona. With over twenty optical and two radio telescopes, it is one of the largest gatherings of astronomical instruments in the northern hemisphere. 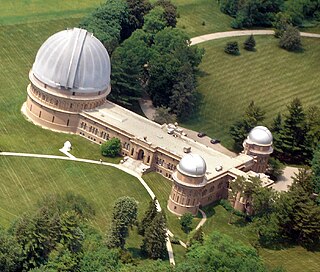 Yerkes Observatory is an astronomical observatory in Williams Bay, Wisconsin owned by the University of Chicago Department of Astronomy and Astrophysics. The observatory, sometimes called "the birthplace of modern astrophysics", was founded in 1892 by astronomer George Ellery Hale and financed by businessman Charles T. Yerkes. It represented a shift in the thinking about observatories, from their being mere housing for telescopes and observers, to the early-20th-century concept of observation equipment integrated with laboratory space for physics and chemistry analysis. The observatory ceased operations in 2018.

Steward Observatory is the research arm of the Department of Astronomy at the University of Arizona (UA). Its offices are located on the UA campus in Tucson, Arizona (US). Established in 1916, the first telescope and building were formally dedicated on April 23, 1923. It now operates, or is a partner in telescopes at five mountain-top locations in Arizona, one in New Mexico, one in Hawaii, and one in Chile. It has provided instruments for three different space telescopes and numerous terrestrial ones. Steward also has one of the few facilities in the world that can cast and figure the very large primary mirrors used in telescopes built in the early 21st century.

Carl Keenan Seyfert was an American astronomer. He is best known for his 1943 research paper on high-excitation line emission from the centers of some spiral galaxies, which are named Seyfert galaxies after him. Seyfert's Sextet, a group of galaxies, is also named after him.

Perkins Observatory is an astronomical observatory in Delaware, Ohio. It is owned and operated by Ohio Wesleyan University. 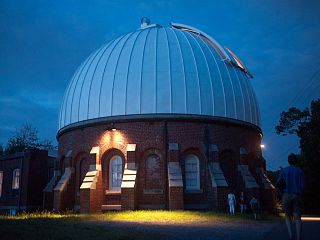 The Leander McCormick Observatory is one of the astronomical observatories operated by the Department of Astronomy of the University of Virginia and is situated just outside Charlottesville, Virginia (US) in Albemarle County on the summit of Mount Jefferson. It is named for Leander J. McCormick (1819–1900), who provided the funds for the telescope and observatory.

The Theodor Jacobsen Observatory is the on-campus observatory of the University of Washington. Built in 1895, it is the second oldest building on campus and was constructed using the remaining Tenino sandstone blocks from Denny Hall, the oldest and first building on campus. The refracting telescope, enclosed within the dome, has a 6-inch Brashear objective lens on a Warner & Swasey equatorial mount. The observatory also includes a transit room on the west side and a 55-seat classroom, which was built later, on the south side.

The Warner & Swasey Company was an American manufacturer of machine tools, instruments, and special machinery. It operated as an independent business firm, based in Cleveland, from its founding in 1880 until its acquisition in 1980. It was founded as a partnership in 1880 by Worcester Reed Warner (1846–1929) and Ambrose Swasey (1846–1937). The company was best known for two general types of products: astronomical telescopes and turret lathes. It also did a large amount of instrument work, such as equipment for astronomical observatories and military instruments The themes that united these various lines of business were the crafts of toolmaking and instrument-making, which have often overlapped technologically. In the decades after World War II, it also entered the heavy equipment industry with its acquisition of the Gradall brand. 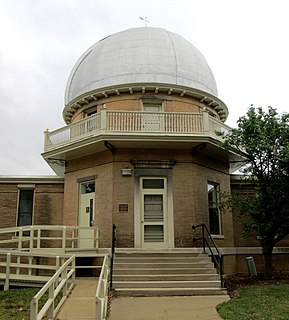 The University of Illinois Astronomical Observatory, located at 901 S. Mathews Avenue in Urbana, Illinois, on the campus of the University of Illinois at Urbana–Champaign, was built in 1896, and was designed by Charles A. Gunn. It has been listed on the National Register of Historic Places since November 6, 1986, and on December 20, 1989, was designated a National Historic Landmark. 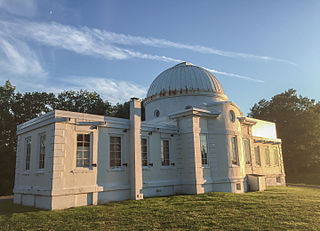 Fuertes Observatory is an astronomical observatory located on the North Campus of Cornell University in Ithaca, New York. The observatory was designed by L.P. Burnham, Cornell Professor of Architecture and completed in fall of 1917. It was originally used by the Civil Engineering Department as an instructional field office for navigation and surveying. Today, the observatory is primarily used for public outreach, welcoming over two thousand visitors per year with open houses on clear Friday nights.

The Monterey Institute for Research in Astronomy (MIRA) is an independent, non-profit, professional astronomical observatory dedicated to astronomical education and research, near Monterey, California. It is the first private observatory in the United States to open in the 20th century.

McMillin Observatory is an astronomical observatory built around 1895, named after Emerson McMillin and run by the Ohio State University. It was closed in 1968, and its telescope later moved to Ballreich Observatory. The observatory was equipped with photographic cameras, a filar micrometer, and a custom Brashear spectroscope. The observatory had two main focuses, education and at least one astronomic scientific research study focus.

Smith Observatory and Dr. William R. Brooks House is a historic home and observatory located at Geneva in Ontario County, New York. Both structures were built in 1888. The observatory is a small frame building consisting of a two-story tower flanked by two small wings. The tower contains a 10-inch refracting telescope by Warner & Swasey of Cleveland, Ohio. The east wing contains an intact meridian transit telescope and sidereal pendulum clock. The house is a two-story brick dwelling with a broad range of intact, late Victorian eclectic features.

Burrell Memorial Observatory referred to as Burrell Observatory is an astronomical observatory located on the campus of Baldwin Wallace University. The observatory was established in 1940, in Berea, Ohio.

Sidney Wilcox McCuskey was an American mathematician and astronomer.

William Pendry Bidelman whose friends called him "Billy", was an American astronomer. Born in Los Angeles, and raised in North Dakota, he was noted for classifying the spectra of stars, and considered a pioneer in recognizing and classifying sub-groups of the peculiar stars. 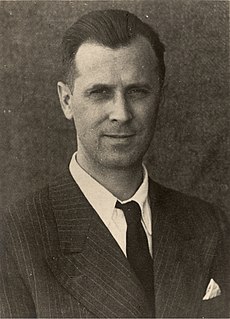 Attilio Colacevich was an Italian astronomer.