Washington Z. SyCip [1] , PLH BOLk RNO1kl (30 June 1921 – 7 October 2017) was a Philippine-born American accountant. He was the founder of the accounting firm EY SGV & Company and the Asian Institute of Management.

SyCip was born in Manila on 30 June 1921 to Albino and Helen SyCip [1] . His father, Albino SyCip, co-founded Chinabank in 1920. His name was derived from the fact that his father was in Washington, D.C. at the time of his birth. He spent his early years living in Shanghai [2] before attending Padre Burgos Elementary School [3] and Victorino Mapa High School. [2] He skipped three grade levels in elementary school. [3]

After learning of his father's imprisonment in the Philippines by Japanese invading forces, he reevaluated his plans of pursuing a doctorate degree. In 1942, he enlisted himself in the US Army [5] and became a naturalized US citizen in 1943 [3] . He joined Camp Cooke but was told to be "overqualified" for the infantry for having the highest IQ level in his regiment. He studied Japanese in a language school in Colorado and cryptography in Virginia. He was then deployed to Calcutta, British India as a codebreaker. [5]

After World War II, SyCip was discharged from the US Army and returned to Manila at age 24. He initially taught accounting at the University of Santo Tomas and two other colleges. He decided against joining one of the British accounting firms returning to the country following the war reasoning that only a white person could become a business partner in such firms. [3]

In March 1946, he opened W. SyCip & Company with a desk in his brother Alexander’s law office in Binondo. [6] He eventually partnered with Alfredo M. Velayo and Vicente O. José to form SyCip, Velayo, José & Company. The firm would evolve into what is now known as SGV & Company (SGV). SyCip earned a Master of Science in Commerce from Columbia Business School. [7]

By 1958, SGV was already the biggest accounting firm in the Philippines and already overtook Fleming & Williamson the then largest British firm operating in the country. He retired as chairman of SGV in 1996 but remained involved with the firm [3] until his death.

In 1968, he co-founded the Asian Institute of Management in the Philippines and served as chairman of its board of trustees and board of governors. He was the first chairman of the Euro-Asia Center of INSEAD, a leading graduate business school, in Fontainebleau, France. [8]

SyCip was a founding governor of the Wharton School's Lauder Institute. [9]

SyCip died on October 7, 2017 aboard Philippine Airlines Flight 126, which took off from Manila bound for Vancouver with continuing service to New York City. He was with his son, George SyCip, and an assistant, Roberto Cabilles. [2] He died before reaching Vancouver. [10]

As of December 2016, SGV & Company (SGV) continues to be the largest accounting firm in the Philippines, auditing about half of 304 publicly listed companies in the Philippine Stock Exchange. SGV has stiff competition from rival firms, Punongbayan & Araullo, KPMG RG Manabat & Company, and Reyes Tacandong & Company, which were established by former business partners of SGV. [11]

The Washington SyCip Park in Makati, Metro Manila was named in his honour on the occasion of his 85th birthday. [12]

The Ayala Foundation and the Jollibee Group Foundation launched fundraising for the "INSEAD Washington SyCip Scholarship" for Filipino MBA students in honour of SyCip. [13] [14]

Positions held by SyCip prior to his death:

Sycip was married to Anna Yu with whom he had three children; Victoria, George, and Robert. [33] 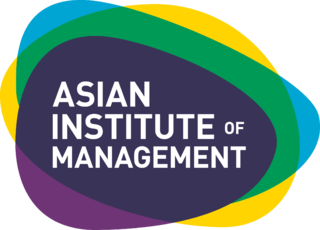 SM Prime Holdings, Inc. (SMPH) is an integrated property developer and a subsidiary of SM Investments Corporation. It was incorporated on 6 January 1994 to develop, conduct, operate and maintain the SM commercial shopping centers and all businesses related thereto, such as the lease of commercial spaces within the compound of shopping centers. It went public on July 5, 1994, and subsequently grew to become the largest company listed on the Philippine Stock Exchange in terms of revenue. The company's main sources of revenues primarily include rental income from mall and food courts, as well as from cinema ticket sales and amusement income.

Franklin "Frank" Magtunao Drilon is a Filipino politician who served as President of the Senate of the Philippines in 2000, from 2001 to 2006, and again from 2013 to 2016. Drilon is currently the Minority Floor Leader of the Senate of the Philippines and serving his fourth term in the Senate. He is also the chairman of the Liberal Party. As of the 18th Congress, he is the only senator who has served in all four major leadership positions in the Senate. 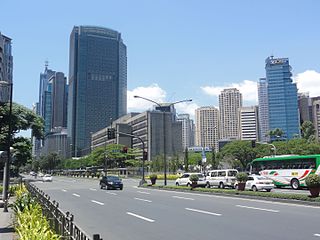 Ayala Avenue is a major thoroughfare in Makati, Philippines. It is one of the busiest roads in Metro Manila, crossing through the heart of the Makati Central Business District. Because of the many businesses located along the avenue, Ayala Avenue is nicknamed the Wall Street of the Philippines. It is also a major link between Epifanio de los Santos Avenue (EDSA) and Metropolitan Avenue. Part of Ayala Avenue from Metropolitan Avenue to Sen. Gil Puyat Avenue also forms Circumferential Road 3.

Jaime Zóbel de Ayala y Pfitz, also known as Jaime Zóbel, is a Filipino businessman and art photographer. He is the chairman emeritus of Ayala Corporation.

Albino Z. SyCip was a Chinese Filipino financier of Fujianese origin. He was known as the "Dean of Philippine Banking". He earned his law degree from the University of Michigan School of Law in Ann Arbor, Michigan.

The PSE All Shares Index is the stock index in the Philippine Stock Exchange in which all of the stocks traded are included in computations for the level of the index. 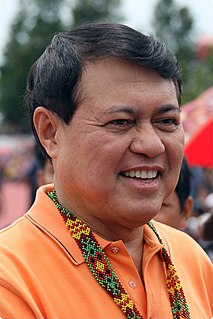 Manuel "Manny" Bamba Villar Jr. is a Filipino billionaire businessman. He has been a Philippine Senator and the president of the Nacionalista Party.

Roberto Velayo Ongpin is a Filipino businessman and Minister of Trade and Industry during the Marcos administration. His younger brother, Jaime Velayo Ongpin, was Minister of Finance of the Philippines under President Cory Aquino.

Jesli Lapus is a former Congressman of Tarlac, former Secretary of Education and uncle of President Benigno Aquino III.

Washington SyCip Park is a privately owned public park near Greenbelt mall in Legaspi Village, Makati, Metro Manila, Philippines. The park opened in 2006, and was named after Filipino accountant and banker Washington SyCip. In addition to many indigenous tropical trees and plants, the park contains gazebos, benches with quotes by Sycip, sculptures and a koi pond.

Roman Tecson Romulo is a Filipino politician and lawyer. He served as a member of House of Representatives representing the Lone District of Pasig City for three consecutive terms from 2007 to 2016. He is the son of former Foreign Affairs Secretary Alberto Romulo and grand-nephew of President of the United Nations General Assembly Carlos Romulo.