We will bury you

Last updated July 17, 2020
For other uses, see We will bury you (disambiguation).

"We will bury you!" (Russian : «Мы вас похороним!», romanized: "My vas pokhoronim!") is a phrase that was used by Soviet First Secretary Nikita Khrushchev while addressing Western ambassadors at a reception at the Polish embassy in Moscow on November 18, 1956. [1] [2] [3] The phrase was originally translated into English by Khrushchev's personal interpreter Viktor Sukhodrev. [4]

While addressing the Western Bloc at the embassy on November 18, 1956, in the presence of communist Polish statesman Władysław Gomułka, First Secretary Khrushchev said: "About the capitalist states, it doesn't depend on you whether or not we exist. If you don't like us, don't accept our invitations, and don't invite us to come to see you. Whether you like it or not, history is on our side. We will bury you!" [5] The speech prompted the envoys from twelve NATO nations and Israel to leave the room. [5]

During Khrushchev's visit to the United States in 1959, the Los Angeles mayor Norris Poulson in his address to Khrushchev stated: "We do not agree with your widely quoted phrase 'We shall bury you.' You shall not bury us and we shall not bury you. We are happy with our way of life. We recognize its shortcomings and are always trying to improve it. But if challenged, we shall fight to the death to preserve it". [6] Many Americans meanwhile interpreted Khrushchev's quote as a nuclear threat. [7]

In another public speech Khrushchev declared: "[...] We must take a shovel and dig a deep grave, and bury colonialism as deep as we can". [8] In a 1961 speech at the Institute of Marxism–Leninism in Moscow, Khrushchev said that "peaceful coexistence" for the Soviet Union means "intense, economic, political and ideological struggle between the proletariat and the aggressive forces of imperialism in the world arena". [9] Later, on August 24, 1963, Khrushchev remarked in his speech in Yugoslavia, "I once said, 'We will bury you,' and I got into trouble with it. Of course we will not bury you with a shovel. Your own working class will bury you," [10] a reference to the Marxist saying, "The proletariat is the undertaker of capitalism" (in the Russian translation of Marx, the word "undertaker" is translated as a "grave digger," Russian : могильщик,) based on the concluding statement in Chapter 1 of the Communist Manifesto : "What the bourgeoisie therefore produces, above all, are its own grave-diggers. Its fall and the victory of the proletariat are equally inevitable". In his memoirs, Khrushchev stated that "enemy propaganda picked up the slogan and blew it all out of proportion". [11]

Some authors suggest that an alternative translation is "We shall be present at your funeral" or "We shall outlive you". [12] [13] [14] Authors have suggested the phrase, in conjunction with Khrushchev's overhead hand clasp gesture meant that Russia would take care of the funeral arrangements for capitalism after its demise. [15] In an article in The New York Times in 2018, translator Mark Polizzotti suggested that the phrase was mistranslated at the time and should properly have been translated as "We will outlast you," which gives an entirely different sense to Khrushchev's statement. [16]

First Secretary Khrushchev was known for his emotional public image. His daughter admitted that "he was known for strong language, interrupting speakers, banging his fists on the table in protest, pounding his feet, even whistling". [9] She called such behavior a "manner, which suited his goal... to be different from the hypocrites of the West, with their appropriate words but calculated deeds". [9] Mikhail Gorbachev suggested in his book Perestroika and New Thinking for our Country and the World that the image used by Khrushchev was inspired by the acute discussions among Soviet agrarian scientists in the 1930s, nicknamed "who will bury whom", the bitterness of which must be understood in the political context of the times.

Lavrentiy Pavlovich Beria was a Soviet politician, Marshal of the Soviet Union and state security administrator, chief of the Soviet security, and chief of the secret police apparatus (NKVD) under Joseph Stalin during World War II, and promoted to deputy premier under Stalin from 1941. He later officially joined the Politburo in 1946. 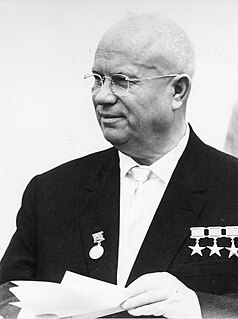 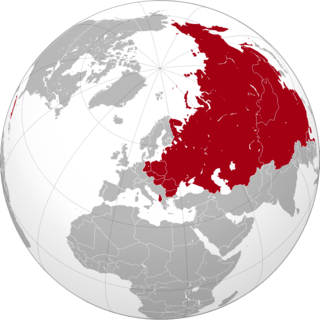 In the USSR, during the eleven-year period from the death of Joseph Stalin (1953) to the political ouster of Nikita Khrushchev (1964), the national politics were dominated by the Cold War, the ideological U.S.–USSR struggle for the planetary domination of their respective socio-economic systems, and the defense of hegemonic spheres of influence. Nonetheless, since the mid-1950s, despite the Communist Party of the Soviet Union (CPSU) having disowned Stalinism, the political culture of Stalinism—a very powerful General Secretary of the CPSU—remained in place, albeit weakened. 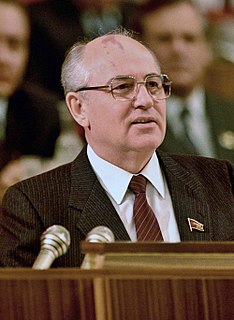 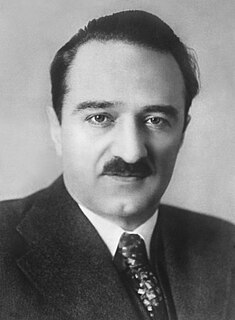 Anastas Ivanovich Mikoyan was an Armenian Communist revolutionary, Old Bolshevik and Soviet statesman during the mandates of Lenin, Stalin, Khrushchev and Brezhnev. He was the only Soviet politician who managed to remain at the highest levels of power within the Communist Party of the Soviet Union, as that power oscillated between the Central Committee and the Politburo, from the latter days of Lenin's rule, throughout the eras of Stalin and Khrushchev, until his peaceful retirement after the first months of Brezhnev's rule. 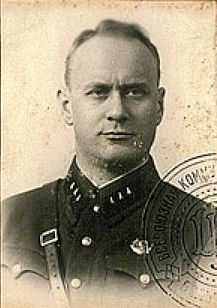 State Security General Ivan Alexandrovich Serov was a head of the KGB between March 1954 and December 1958, as well as head of the GRU between 1958 and 1963. He was Deputy Commissar of the NKVD under Lavrentiy Beria, and played a major role in the political intrigues after Joseph Stalin's death. Serov helped establish a variety of secret police forces in Central and Eastern Europe after the lowering of the Iron Curtain, and played an important role in crushing the Hungarian Revolution of 1956. 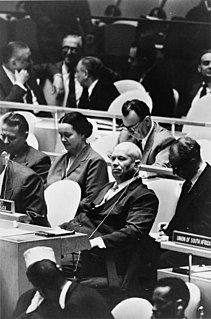 Nikita Khrushchev's shoe-banging incident occurred during the 902nd Plenary Meeting of the United Nations General Assembly held in New York City in 1960. During the session on 12 October, Nikita Khrushchev, First Secretary of the Communist Party of the Soviet Union, pounded his shoe on his delegate-desk in protest at a speech by Philippine delegate Lorenzo Sumulong.

"Communism in 20 years" was a slogan put forth by Nikita Khrushchev at the 22nd Congress of the Communist Party of the Soviet Union in 1961. Khrushchev's quote from his speech at the Congress was from this phrase: "We are guided by strictly scientific calculations. And calculations show that in 20 years we will build mainly a communist society".

Kuzma's mother or Kuzka's mother is a part of the Russian idiomatic expression "to show Kuzka's mother to someone", an expression of an unspecified threat or punishment, such as "to teach someone a lesson" or "to punish someone in a brutal way". It entered the history of the foreign relations of the Soviet Union as part of the image of Nikita Khrushchev, along with the shoe-banging incident and the phrase "We will bury you". 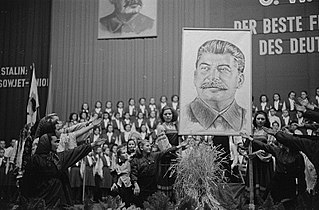 Joseph Stalin's cult of personality became a prominent feature of Soviet culture in December 1929, after a lavish celebration of his 50th birthday. For the rest of Stalin's rule, the Soviet press presented Stalin as an all-powerful, all-knowing leader, with Stalin's name and image appearing everywhere. 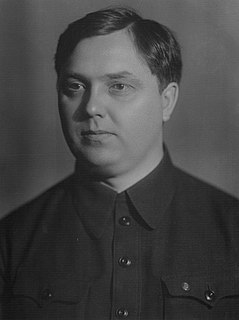 Georgy Maximilianovich Malenkov was a Soviet politician who briefly succeeded Joseph Stalin as the leader of the Soviet Union. However, at the insistence of the rest of the Presidium, he ceded control over the party apparatus in exchange for remaining first among equals as the country's Premier. Subsequently, Malenkov was embroiled in a power struggle ultimately culminating in his removal from the premiership in 1955 and the Presidium in 1957.

The Khrushchev Thaw refers to the period from the mid-1950s to the mid-1960s when repression and censorship in the Soviet Union were relaxed, and millions of political prisoners were released from Gulag labor camps due to Nikita Khrushchev's policies of de-Stalinization and peaceful coexistence with other nations. 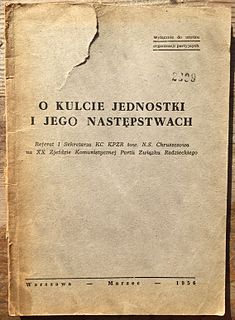 "On the Cult of Personality and Its Consequences", also popularly known as the "Secret Speech", was a report by Soviet leader Nikita Khrushchev, First Secretary of the Communist Party of the Soviet Union, made to the 20th Congress of the Communist Party of the Soviet Union on 25 February 1956. Khrushchev's speech was sharply critical of the reign of the deceased General Secretary and Premier Joseph Stalin, particularly with respect to the purges which had especially marked the last years of the 1930s. Khrushchev charged Stalin with having fostered a leadership cult of personality despite ostensibly maintaining support for the ideals of communism. The speech was leaked to the west by the Israeli intelligence agency, Shin Bet, which received it from the Polish journalist Viktor Grievsky.

Democracy and Totalitarianism (1968) is a book by French philosopher and political scientist Raymond Aron. It compares the political systems of the Soviet Union and the democratic countries of the West. 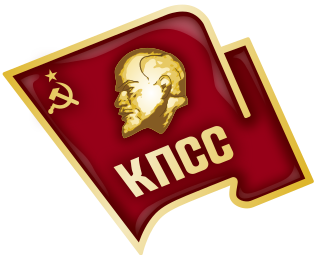 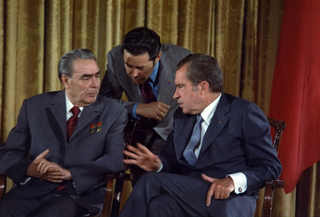 De-Stalinization consisted of a series of political reforms in the Soviet Union after the death of long-time leader Joseph Stalin in 1953, and the ascension of Nikita Khrushchev to power.

The following lists events that happened during 1956 in the Union of Soviet Socialist Republics. 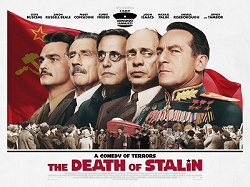 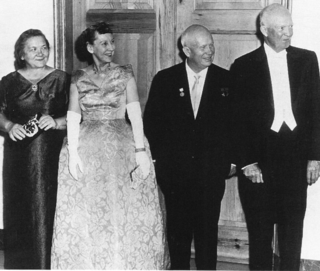 The state visit of Nikita Khrushchev to the United States was a 13-day visit from 15–27 September 1959. It marked the first state visit of a Soviet leader to the US. Khrushchev, then General Secretary of the Communist Party of the Soviet Union and Chairman of the Council of Ministers, was also the first ethnic Ukrainian leader to set foot in the Western Hemisphere. Being the first visit by a leader of his kind, the coverage of it resulted in an extended media circus.