The school holds specialisms in languages and science.

On 15 October 2015, the government gave permission for the school to create an "annexe" in Sevenoaks. Before this time no new grammar schools were permitted so Sevenoakes which was non selective, was not permitted to create one. This judgement was controversial.

Weald of Kent is a fairly modern school with many additional extensions. In 2003, a canteen operated by independent catering contractors was built called 'La Wokerie' - a pun derived from the school's name "WOK". In 2006, a new English and Humanities Block was built, referred to by most students as 'the new building' It offered larger classrooms, some of which have false walls between two of them which can open up to create one large room. A new Arts and Drama suite was completed in early 2008. In the beginning of 2014, another two storey building was built for Maths and Examinations, and an extension to 'La Wokerie' was added by converting the adjacent classroom into a diner style restaurant with extra seating and a salad bar. Following the conversion of the old gymnasium into the 'Sixth Form Hub', accompanying the 'Sixth Form Café', the school opened a new sports hall towards the end of 2016. The opening was attended by British gymnast Max Whitlock. [2]

On 15 October 2015, Nicky Morgan, the Education Secretary, announced that government would give permission for the school to create an "annexe" in Sevenoaks, which had no grammar schools. [3] [4] The site for the 'annexe' is that of the former Wildernesse School on Seal Hollow Road, preparations started on the site soon after planning permission was granted in 2014. [5]

The decision is controversial; as 1998 legislation barred any new school from adopting selective admissions. [6] This action was seen as a way round this legislation. It was supported by Kent County Council and an active group of parents, but opposed by others. [7]

An earlier attempt had been rejected by the then Education Secretary Michael Gove in December 2013, as a single-sex school could not legally open a co-educational annexe. Parents had been balloted on whether the school should change its status and they had chosen to remain a girls only school. Kent County Council revised the scheme so the units became modular, and the application was resubmitted. It is this application that was approved. [8] The annexe opened in September 2017.

Exam results for the 2013 academic year showed that 100% of pupils attained 5 GCSE grades A* to C (including English and maths). 99.1% of the A level grades were A* to E. The school has been judged by OFSTED to be academically 'outstanding' continuously since 2007. It was last inspected in 2012. It has National Teaching School status since 2014. [9] 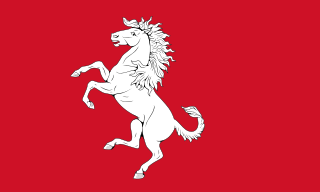 Sevenoaks is a town in Kent with a population of 29,506 situated south-east of London, England. Also classified as a civil parish, Sevenoaks is served by a commuter main line railway into London. Sevenoaks is 21 miles (34 km) from Charing Cross, the traditional centre of London. It is the principal town of the Sevenoaks district, followed by Swanley and Edenbridge. 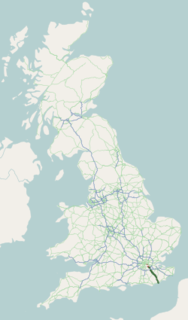 The A21 is a trunk road in Southern England, one of several which connect London and various commuter towns to the south coast. It provides a link to Hastings, East Sussex and parts of Kent. Half of the distance covered is over gently undulating terrain, with some hills and bends. Often traffic is slow-moving, particularly on weekdays on the short single carriageway stretches; and in summer with holiday traffic. Because of this, people have described the A21 as "a joke" and businesspeople have been reported to "hate coming down the A21". There have been many proposals to upgrade parts of the A21 in response to this.

Sevenoaks is a local government district in west Kent, England. Its council is based in the town of Sevenoaks.

The Hastings line is a secondary railway line in Kent and East Sussex, England, linking Hastings with the main town of Tunbridge Wells, and London via Tonbridge and Sevenoaks. Although primarily carrying passengers, the railway also serves a gypsum mine which is a source of freight traffic. Southeastern operates passenger trains on the line, and it is one of their busiest lines.

Tonbridge railway station is on the South Eastern Main Line in England, serving the town of Tonbridge, Kent. It is 29 miles 46 chains (47.6 km) from London Charing Cross via Sevenoaks. Trains calling at the station are operated by Southeastern and Southern. 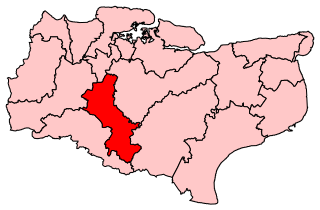 Maidstone and The Weald is a constituency represented in the House of Commons of the UK Parliament since 2010 by Helen Grant, a Conservative.

Tunbridge Wells is a constituency represented in the House of Commons of the UK Parliament since 2005 by Greg Clark, a Conservative who served as Secretary of State for Business, Energy and Industrial Strategy from 2016 to 2019.

Tunbridge Wells Girls' Grammar School (TWGGS), established in 1905, is an all-female selective school in Royal Tunbridge Wells, a town in Kent, England. The "eleven plus" examination represents the main entrance criterion, along with residence within the catchment area A small number of spaces are reserved for students outside the catchment area, which are called governess places. These are generally only given to students with high marks in the 11+. The current head mistress is Mrs Linda Wybar. 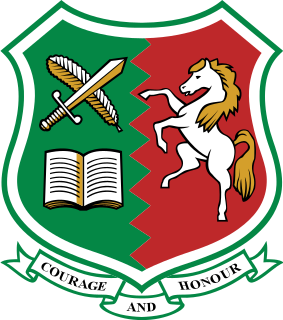 Tonbridge Grammar School is a state grammar school in Tonbridge, Kent, United Kingdom. The school was established in 1905 at the Technical Institute in Avebury Avenue Tonbridge, having only 19 enrolled students. Today, the school is situated in the South of Tonbridge, where there are approximately 1050 students ranging from 11 to 18 years.

The Weald is an intermittently wooded area between and east of the North and South Downs in Sussex, Kent and Surrey, South East England. It once had a nationally important iron industry. 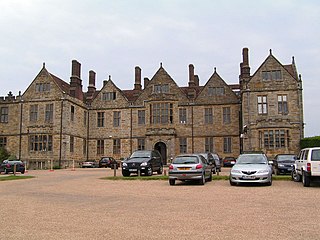 Weald Warriors RLFC are a rugby league team playing in the London and South East Championship of the Rugby League Conference London & South Division. The club is based in Royal Tunbridge Wells, Kent with players recruited from West Kent and East Sussex.