Weed is a hamlet and a census-designated place in Otero County, New Mexico, United States. It lies alongside New Mexico State Road 24 on the southeastern slopes of the Sacramento Mountains at an elevation of 7,047 ft. It has had a Post Office since 1885. [4] As of the 2010 census, its population was 63. [2]

Weed was founded in 1884 by George and Elizabeth Lewis. [4] It was named after William H. Weed, who opened a branch store there. [4]

Edit: The Weed Store Llc is owned and operated by Mike and Anna Jones. The store was purchased in 2014 by the family and has continued to provide gas and much needed supplies to residents and tourists.

It is within Cloudcroft Municipal Schools. [6]

Previously Alamogordo Public Schools operated Weed Elementary School and Weed High School. [7] Weed High School opened circa 1885. [8] Previously Weed schools were under the Otero County Board of Education. Weed residents believed the Alamogordo district would be more likely to keep their schools open if there was an enrollment decrease, so they opted for Alamogordo schools instead of Cloudcroft schools. The Cloudcroft school board disliked the decision and in 1958 passed a motion stating that the district should not accept Weed or Piñon students even if their respective areas offered to pay tuition to Cloudcroft schools. [9] Weed Schools consolidated into the Alamogordo district on July 1, 1959. [10]

In 1970 the State of New Mexico funded the Weed School with $69,000 for one year, arguing that the school's continued operation was a necessity. [11] Weed High School had grades 7-12. In 1991 the Weed schools had 50 students, with 25 each in elementary and secondary levels, and five secondary teachers. On April 15 of that year Alamogordo board voted 4-0 to close Weed High, citing operating expenses as the annual Weed High expenses were $247,000 while it collected $147,000 that year from Weed residents. It made a deal with Cloudcroft schools to have the children sent there. Some Weed residents did not like the deal as they perceived Cloudcroft schools to be too large and because the Cloudcroft area catered to tourists. The Weed secondary teachers had the option of taking jobs in Alamogordo schools. [8] Because Weed Elementary remained as a part of the Alamogordo district, it meant that the elementary and high school students had different scheduling. Weed residents did not believe the Alamogordo operation figures, but felt they had no recourse as they believed they could not afford to hire adequate legal representation. The Cloudcroft district did not begin charging tuition to Alamogordo schools and relied on increased funding from its higher enrollment. [9]

In the 1991-1992 school year Weed Elementary had 18 students, [12] and two teachers. In 1991-1992 various Weed parents told the Alamogordo district that a teacher they disliked should be moved from the school or they would not move their children to other schools. The district chose not to remove the teacher. [13] For the 1992-1993 school year the projected enrollment was 24. [14] By August 1992 the teacher criticized by Weed parents remained while the other teacher did not go back to Weed Elementary. The parents opposed to the remaining teacher withdrew 20 of the children. [13] By August 29, 1992 no students showed up to Weed Elementary. Area parents sent them to the Timberon school or to Cloudcroft Schools. [14] The Cloudcroft district chose to accept the Weed students. [13] Under New Mexico law a school with less than eight students should not operate, so the Alamogordo district decided to close Weed Elementary. The Alamogordo district offered jobs in Alamogordo schools to the Weed elementary employees, including the only remaining teacher. [14] The district still chose to employ the teacher instead of keeping the school open. [13] At that point all grade levels K-12 were officially designated to Cloudcroft schools. [12] By October 1992 Weed area parents were campaigning to have the elementary school reopened. [13] In November 1992 the Cloudcroft district's board passed a resolution to annex portions of the Alamogordo district, including Weed. In a separate motion the district drew new electoral boundaries with the annexed area effective the approval of said annexation. [12]

Pinehill or Pine Hill is a census-designated place in Cibola County, New Mexico, United States. It is located on the Ramah Navajo Indian Reservation. The population was 88 at the 2010 census. The location of the CDP in 2010 had become the location of the Mountain View CDP as of the 2020 census, while a new CDP named "Pinehill" was listed 8 miles (13 km) further south, at a point 4 miles (6 km) southeast of Candy Kitchen.

Alamogordo is the seat of Otero County, New Mexico, United States. A city in the Tularosa Basin of the Chihuahuan Desert, it is bordered on the east by the Sacramento Mountains and to the west by Holloman Air Force Base. The population was 30,403 as of the 2010 census. Alamogordo is known for its connection with the 1945 Trinity test, which was the first ever explosion of an atomic bomb. 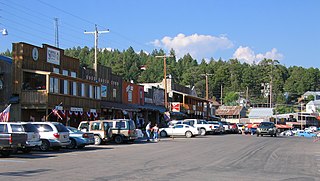 Cloudcroft is a village in Otero County, New Mexico, United States, and is located within the Lincoln National Forest. The population was 674 at the 2010 census. Despite being located in an otherwise arid region, its high elevation allows for a relatively mild summer that makes it a popular tourist attraction in west Texas and southern New Mexico. It was named by Fodor's in 2002 as the Number 3 "Most Overlooked and Underrated Destination Spot." Tourism remains the primary economic driver of the village. 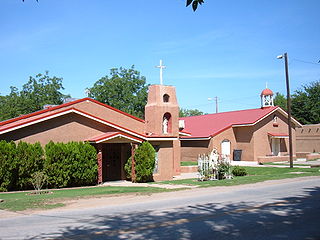 La Luz is a census-designated place (CDP) in Otero County, New Mexico, United States. The population was 1,615 at the 2000 census. It is located immediately north of Alamogordo and lies in the eastern edge of the Tularosa Basin and on the western flank of the Sacramento Mountains. Until 1848, La Luz was a part of Mexico. The CDP gets its name from the Spanish word for "light."

Timberon is a census-designated place (CDP) in Otero County, New Mexico, United States, and is within the Sacramento Mountains at the southern edge of the Lincoln National Forest. The population was 309 at the 2000 census.

Dell City Independent School District (DCISD) is a public school district based in Dell City, Texas (USA). The district operates Dell City School, which covers grades Kindergarten through 12 and serves students in northern Hudspeth County. Dell City School is classified as a 1A school by the UIL. In 2016, the school was rated "Improvement Required" by the Texas Education Agency. In addition to northern Hudspeth County, it also serves areas of southeast Otero County, New Mexico as part of an inter-district agreement with Alamogordo Public Schools due to the area's lack of proximity to the Alamogordo district's schools.

The Ramah Navajo Indian Reservation is a non-contiguous section of the Navajo Nation lying in parts of west-central Cibola and southern McKinley counties in New Mexico, United States, just east and southeast of the Zuni Indian Reservation. It has a land area of 230.675 sq mi (597.445 km²), over 95 percent of which is designated as off-reservation trust land. According to the 2000 census, the resident population is 2,167 persons. The Ramah Reservation's land area is less than one percent of the Navajo Nation's total area.

High Rolls is an unincorporated community and census-designated place in Otero County, New Mexico, United States. It is nestled within the Lincoln National Forest at the southernmost tip of the Sacramento Mountains. Elevation is approximately 6,750 feet (2,060 m). High Rolls includes a general store, a post office, an elementary school, two churches, and sometimes a bar. High Rolls has many local attractions and festivities for the locals or first time visitor to enjoy. It is also home to two annual festivals, the Cherry Festival and the Apple Festival, both presented by The High Rolls/Mountain Park Lions Club.

Gallup-McKinley County Schools (GMCS) is a school district based in Gallup, New Mexico which serves students from Gallup and surrounding areas of McKinley County.

Orogrande is an unincorporated community in Otero County, New Mexico, United States, located at a latitude of 32.37111 and a longitude of -106.08389 in the Jarilla Mountains of the Tularosa Basin on U.S. 54 between El Paso, Texas and Alamogordo. Originally a mining town named Jarilla Junction due to its proximity to the Jarilla Mountains, established in 1905, the town was renamed Orogrande in 1906 and is not far from similar mining towns named Brice and Ohaysi. The population soared to approximately 2000 as the result of a gold rush that occurred in 1905, but quickly collapsed almost to the point of depopulation when the gold deposits proved much less abundant than expected. There are still numerous abandoned mines in the area which fall under the jurisdiction of the Bureau of Land Management. Other land around Orogrande is part of a military reservation under the control of Fort Bliss.

The New Mexico School for the Blind and Visually Impaired is a state special education school with a residential campus in Alamogordo, New Mexico and a preschool in Albuquerque, New Mexico. It operates outreach programs throughout the state.

Piñon is an unincorporated ranching community in Otero County in southern New Mexico, in the southwestern United States. The town is in the pinon-juniper shrublands habitat with an altitude of 6,060 feet. It is located at the intersection of NM Route 24 and NM Route 506. The postoffice in Piñon opened in 1907. In 2014, Piñon was ranked as the most politically conservative town in New Mexico.

Sacramento is a census-designated place in Otero County, New Mexico, United States. Its population was 58 as of the 2010 census. Sacramento has a post office with ZIP code 88347. New Mexico State Road 521 passes through the community.

Alamogordo High School is a public high school in Alamogordo, New Mexico. It is a part of Alamogordo Public Schools.

Deutsche Schule Alamogordo was a German international school in Alamogordo, New Mexico. It was operated by the German government and was the largest such school not operated within Germany. Most of the students had parents in the German Air Force stationed at Holloman Air Force Base. It had multiple educational tracks seen in education in Germany.