The film follows a young man, A Xi, who is recently released from prison. Once released, he seeks out his old girlfriend Li Xin, who has since begun a relationship with La La, a young musician. As the two men vie for her attention, tension and violence escalate.

Weekend Lover served as Lou Ye's first feature-film since graduating from the Beijing Film Academy in 1989 and is notable for having the youngest production team in Chinese cinematic history upon its release. [1] Shot and produced in 1993 and 1994, once complete, the film was banned for two years by the Chinese film censors; after the ban ended, Weekend Lover was released internationally at the tail end of 1995. [2] [3]

Weekend Lover's noir-style and tales of violent disaffected youth led to its comparison with similar films of the period, notably Zhang Yuan's Beijing Bastards . Like that film, Weekend Lover is also considered a defining film for the "Sixth Generation" of Chinese cinema, particularly in its tone and subject matter that focuses on modern urban life instead of traditional Chinese history. [1] Less positive reviews often praised the film as technically assured, but convoluted in its plotting leading at least one reviewer to refer to it as a "minor festival curio." [3]

The film managed to premiere at a handful of foreign film festivals, notably the Turin Young Cinema Festival in 1995. [3] It eventually went on to win the Werner Fassbinder Award for Best Direction at the 1996 Mannheim-Heidelberg International Film Festival. [1]

Beijing Film Academy is a coeducational state-run higher education institution in Beijing, China. The film school is the largest institution specialising in the tertiary education for film and television production in Asia. The academy has earned international recognition for its achievements in film production.

The BigScreen Festival or BigScreen Italia is a film festival that focuses on Chinese and Italian cinema. It was first held in 2004 in Padua, Italy, but in 2006 moved to Kunming, Yunnan, China.

Jia Hongsheng was a Chinese actor who became known in the late 1980s and early 1990s for roles in movies like The Case of the Silver Snake (1988), Good Morning, Beijing (1991), A Woman from North Shaanxi (1993) and Weekend Lover (1995). His performances were praised by critics and he developed a rebellious image that made him popular among artistic youth and the "Sixth Generation" of Chinese directors.

Frozen is a 1997 Chinese film directed by Wang Xiaoshuai. The film was originally shot in 1994, but was banned by Chinese authorities and had to be smuggled out of the country. Moreover, Wang was operating under a blacklisting from the Chinese Film Bureau that was imposed after his previous film, The Days, was screened internationally without government approval. As such, Wang was forced to use the pseudonym "Wu Ming" while making this film. 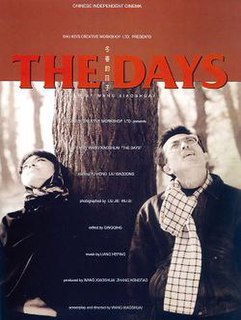 The Days is filmmaker Wang Xiaoshuai's 1993 directorial debut. Filmed entirely in black-and-white, The Days follows the life of Dong, and Chun, married artists who have recently graduated from the Beijing Art Institute. Living meagerly in the hope of making enough money off their works, it soon becomes obvious to everyone but themselves that the marriage has begun to die.

Ning Ying is a female Chinese film director often considered a member of China's "Sixth Generation" filmmaker coterie, a group that also includes Jia Zhangke, Zhang Yuan and Wang Xiaoshuai. However, this is more a result of a shared subject matter than anything else, as chronologically, Ning is closer to the earlier Fifth Generation. Her sister, the screenwriter Ning Dai, is a frequent collaborator and the wife of fellow director Zhang Yuan. In 1997, she was a member of the jury at the 47th Berlin International Film Festival. 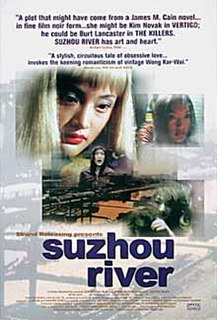 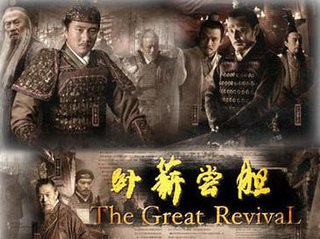 The Great Revival, also known as Wo Xin Chang Dan, is a Chinese television series based on the conflict between the Yue and Wu states in the Spring and Autumn period. The Chinese title of the series is a Chinese idiom derived from King Goujian of Yue's perseverance in overcoming the odds to revive his fallen state of Yue and conquer the rival state of Wu. The series was first broadcast on CCTV-8 in mainland China in January 2007. 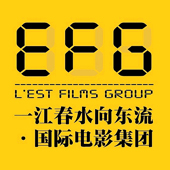 Journey to the West is a Chinese television series adapted from the 16th century novel of the same title. The series was directed and produced by Cheng Lidong and starred Zhenxiang, Victor Chen, Xie Ning and Mou Fengbin in the leading roles. It was first aired on Zhejiang Satellite TV (ZJSTV) in China on 14 February 2010. This version is not to be confused with the 2011 television series of the same title produced by Zhang Jizhong. 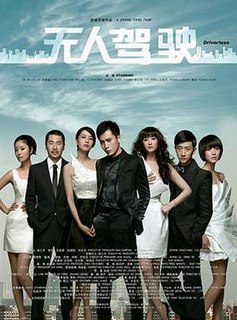 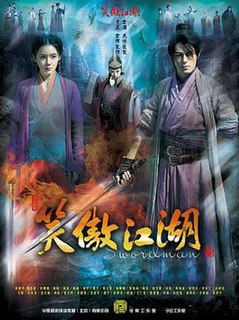 Swordsman is a 2013 Chinese television series adapted from Louis Cha's novel The Smiling, Proud Wanderer. The series is written and produced by Yu Zheng, and stars Wallace Huo, Joe Chen, Yuan Shanshan, Chen Xiao and Yang Rong. Shooting started on 24 March 2015 in Xiandu, Jinyun County, Lishui, Zhejiang. It was first aired in China on Hunan Television from 6 February to 4 March 2013. The plot deviates significantly from the novel, with Dongfang Bubai depicted as a woman and having a romantic affair with Linghu Chong. 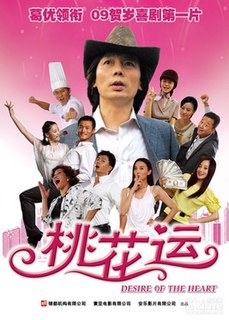 Desires of the Heart is a 2008 Chinese romantic comedy film directed and written by Ma Liwen, starring Vivian Wu, Ge You, Fan Bingbing, and Cong Shan. The film was first released in China on 20 November 2008, and grossed over ￥20 million. 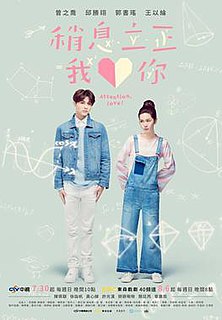