Wells is a small mining and tourist town in the Cariboo District of central British Columbia, located on BC Highway 26, 74 km (46 mi) from Quesnel and 8 km (5 mi) before the highway's terminus at Barkerville. It gains much of its revenue and jobs from tourists who pass through on their way to the Bowron Lake Provincial Park and to the historic museum town of Barkerville.

Originally a company town, [2] it was managed by Cariboo Gold Quartz Mine. Fred M. Wells, for whom the town was named, prospected in the area for 10 years before finding the minerals that built the company. [3] : 292  At its heyday of the 1930s, Wells sported 4500 people. [4] In 1942 it had a greater population than Quesnel or Prince George. [5] The closure of the gold and other mineral mines in 1967 took its toll on the town and most of the population moved away. Today it has a listed population of just 250 which doubles during the summer months.

Between May and September, Wells sees over 100,000 tourists pass through on their way to Barkerville. Most visitors stay or camp overnight in Wells, which has an active arts and outdoor entertainment sector. During the winter months, visitors come for the cross-country ski trails, snowmobiling, and artistic and study retreats. During the summer visitors enjoy galleries and live performances.

Wells doesn't have a weather station, but Barkerville does (located 7 km (4.3 mi) away). Wells has a subarctic climate (Köppen climate classification Dfc), resulting in long, cold and snowy winters, accompanied by short and cool summers due to its high altitude and latitude. Its growing season averages only 66 days. [6]

100 Mile House is a town and district municipality located in the South Cariboo region of central British Columbia, Canada.

Barkerville was the main town of the Cariboo Gold Rush in British Columbia, Canada, and is preserved as a historic town. It is located on the north slope of the Cariboo Plateau near the Cariboo Mountains 80 kilometres (50 mi) east of Quesnel. BC Highway 26, which follows the route of the Cariboo Wagon Road, the original access to Barkerville, goes through it. 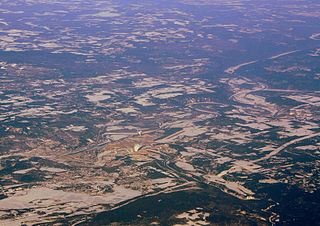 Quesnel is a city located in the Cariboo Regional District of British Columbia, Canada. Located nearly evenly between the cities of Prince George and Williams Lake, it is on the main route to northern British Columbia and the Yukon. Quesnel is located at the confluence of the Fraser River and Quesnel River. Quesnel's metropolitan area has a population of 23,146 making it the largest urban center between Prince George and Kamloops.

Cache Creek is a historic transportation junction and incorporated village 354 kilometres (220 mi) northeast of Vancouver in British Columbia, Canada. It is on the Trans-Canada Highway in the province of British Columbia at a junction with Highway 97. The same intersection and the town that grew around it was at the point on the Cariboo Wagon Road where a branch road, and previously only a trail, led east to Savona's Ferry on Kamloops Lake. This community is also the point at which a small stream, once known as Riviere de la Cache, joins the Bonaparte River.

Parksville is a city on Vancouver Island in British Columbia, Canada. As of the 2021 Census, Parksville's population was 13,642, representing a 9.5% increase over the 2016 Census.

Highway 26, also known as the Barkerville Highway, is a minor east-west highway in the North Cariboo region of the Central Interior of British Columbia, Canada. First opened in 1967, it provides access to the community of Wells and the famous gold rush town of Barkerville at the foot of the Cariboo Mountains, respectively 75 and 81 km east of the highway's junction with Highway 97 at Quesnel. Also accessed by the route is Bowron Lakes Provincial Park, a popular canoeing expedition circuit, the cutoff for which is between Barkerville and Wells. Since Highway 26 is very lightly travelled, it has not needed any major improvements since its opening. Its route is approximately the same as that of the Cariboo Wagon Road.

Burns Lake is a rural village in the North-western-Central Interior of British Columbia, Canada, incorporated in 1923. The village had a population of 1,779 as of the 2016 Census.

Lytton is a village of about 250 residents in southern British Columbia, Canada, on the east side of the Fraser River and primarily the south side of the Thompson River, where it flows southwesterly into the Fraser. The community includes the Village of Lytton and the surrounding community of the Lytton First Nation, whose name for the place is Camchin, also spelled Kumsheen. 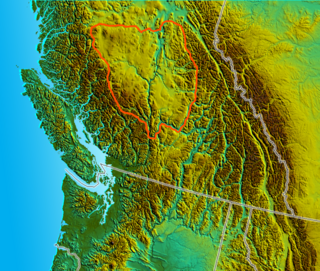 The Cariboo is an intermontane region of British Columbia, Canada, centered on a plateau stretching from Fraser Canyon to the Cariboo Mountains. The name is a reference to the caribou that were once abundant in the region.

Clearwater is a district municipality in the North Thompson River valley in British Columbia, Canada, where the Clearwater River empties into the North Thompson River. It is located 124 km (77 mi) north of Kamloops. The District of Clearwater was established on December 3, 2007, making it one of the newest municipalities in British Columbia. It is near Wells Gray Provincial Park and is surrounded by the Trophy Mountains, Raft Mountain and Dunn Peak.

Yale is an unincorporated town in the Canadian province of British Columbia.

Lantzville is a coastal community on the east side of Vancouver Island, British Columbia, Canada, along the western shore of the Strait of Georgia and immediately north of Nanaimo.

The Cariboo Regional District spans the Cities and Districts of Quesnel, Williams Lake, 100 Mile House, and Wells in the Central Interior of British Columbia. 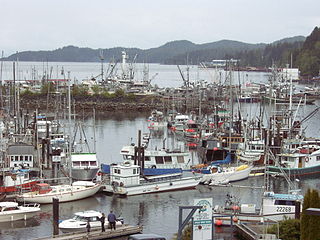 Port Hardy is a district municipality in British Columbia, Canada located on the north-east end of Vancouver Island. Port Hardy has a population of 4,132 as of the last census (2016). 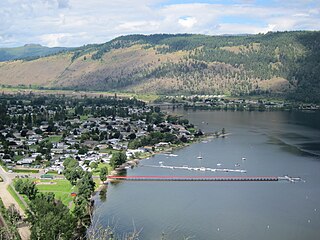 Chase is a village located in the Interior of British Columbia, Canada. It has a population of roughly 3,124, and its main industries are forestry and tourism. It is located at the outlet of Little Shuswap Lake, which is the source of the South Thompson River. Chase Creek, which drops over three small waterfalls before flowing through the town, enters the South Thompson just below the lake's outlet.

Likely is a unincorporated community in British Columbia, Canada. It is located in the Cariboo region of the province, and is situated where the west arm of Quesnel Lake empties into the Quesnel River. Roads from Likely lead southwest to Williams Lake, northwest to Quesnel, south to Horsefly, and north to Barkerville. Likely is in the Quesnel Highland, a transition zone between the Cariboo Plateau and the Cariboo Mountains. 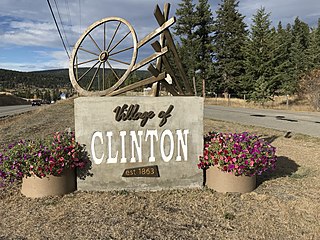 Cottonwood River is a tributary of the Fraser River in the Central Interior of British Columbia, Canada. Rising at the confluence of the Swift River and Lightning Creek at Coldspring House in the Cariboo goldfields of the northern Cariboo Plateau, it flows northwest and then turns southwest to join the Fraser just north of the city of Quesnel, which is at the confluence of the Quesnel River with the Fraser.