"Wenn das Brot, das wir teilen" (When the bread that we share) is a Christian hymn, with a text written in 1981 by Claus-Peter März, and a melody by Kurt Grahl. It was written to commemorate St. Elisabeth, and begins with a reference to her Miracle of the Roses. The song, of the genre Neues Geistliches Lied (NGL), is part of German hymnals, including Evangelisches Gesangbuch and Gotteslob , and of songbooks.

The Protestant theologian Claus-Peter März  [ de ] from Erfurt wrote the text of "Wenn das Brot, das wir teilen" in 1981, on the occasion of the 750th anniversary of death of St. Elisabeth who is venerated especially in Thuringia. [1] The text begins with a reference to the saint's Miracle of the Roses. [1] The church musician Kurt Grahl  [ de ] from Leipzig composed the melody the same year for a youth pilgrimage from Leipzig to places where she was active. [1] A year later, the song was featured at the Katholikentag convention in Düsseldorf, and was then included in many song collections. [1]

The song became part of both the Protestant and the Catholic common hymnals. In Evangelisches Gesangbuch , it is EG 667. It was included in the Gotteslob as GL 470, in the section "Gesänge – Schöpfung: Gerechtigkeit und Friede" (Chants – Life in the world: justice and peace). [2] The song is also part of several songbooks, including collections for young people and ecumenical songbooks. [3]

The hymn is in five stanzas with a short strophe of two lines, and a long refain of four lines with the last one repeated. It is written in the first person plural, speaking in the first stanza of the bread that we share, and in the second of the suffering of the poor that we change, according to Matthew 25:40. The third stanza begins with the hand that we hold, the fourth stanza with the consolation that we give, and in the final stanza of our suffering and death carrying us forward. Each time, the idea is that giving and sharing is also good for the giver. [1]

The refrain reflects the images of God's tent among people, and seeing him from face to face, from the Book of Revelation. The key point of the text is that this happens already now each time that we love our neighbours. [1]

Nikolaus Herman was a German Lutheran cantor and teacher, creating numerous Protestant hymns. Some of them are contained in hymnals in several languages.

"Gott sei gelobet und gebenedeiet" is a Lutheran hymn of 1524 with words written by Martin Luther who used an older first stanza and melody. It is a song of thanks after communion. Luther's version in three stanzas was printed in the Erfurt Enchiridion of 1524 and in Johann Walter's choral hymnal Eyn geystlich Gesangk Buchleyn the same year. Today, the song appears in German hymnals, including both the Protestant Evangelisches Gesangbuch, and in a different version in the Catholic Gotteslob.

"Der Geist des Herrn erfüllt das All" is a Christian hymn for Pentecost by Maria Luise Thurmair, written in 1941. First printed in 1946, it appeared with a 1609 melody by Melchior Vulpius in the German Catholic hymnal Gotteslob in 1975 as GL 249. It has been included in ecumenical hymnals and songbooks.

"Erschienen ist der herrlich Tag" is a German Easter hymn, with text and tune written by Nikolaus Herman and published in 1561. It has inspired musical settings by composers from the 17th to the 20th century. It appears in several hymnals, including the German Protestant hymnal Evangelisches Gesangbuch. Other hymns, especially Easter hymns, in both German and English, are sung to the same melody. 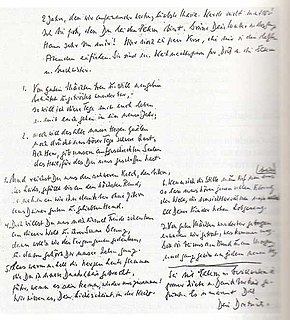 "Von guten Mächten" is a Christian poem which Dietrich Bonhoeffer wrote in 1944 when he was in Finkenberg Konzentrationslager because of his resistance to the Nazis. It is his last theological text before he was executed on 9 April 1945. It became a frequently sung hymn, with different melodies, which has appeared in current German hymnals. The incipit is Von guten Mächten treu und still umgeben. The seventh and last stanza, Von guten Mächten wunderbar geborgen, has been used as a refrain in a popular version.

"Sonne der Gerechtigkeit" is a German Christian hymn with a complex history. The image of a sun of justice or righteousness was created by the prophet Malachi. The text was compiled around 1930 by Otto Riethmüller from older stanzas by different hymnwriters, intended as a wake-up call to the church in a Germany facing the rise of the Nazis. Four of its originally seven stanzas were written in the 18th century, two by Johann Christian Nehring, and two by Christian David. The remaining stanzas were taken from Christian Gottlob Barth, written in the 19th century. An alternative seventh stanza was suggested in 1970, with a strong ecumenical focus. The hymn expresses a call for justice, renewal and unity, within the congregation and church, and among peoples. 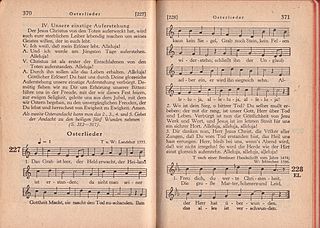 "Das Grab ist leer, der Held erwacht" is a Catholic hymn for Easter, first printed in 1777 in the hymnal Landshuter Gesangbuch published by Franz Seraph von Kohlbrenner. Keeping only the first of five stanzas, with additional two stanzas, it appeared in hymnals of the 19th century, and later in different versions in several regional sections of the Catholic hymnal Gotteslob. It is a frequently sung hymn in Easter services.

"Wir wollen alle fröhlich sein" is a German Easter hymn, with a text mostly by Cyriakus Schneegass, who added to an older first stanza, and a 1544 tune by the Bohemian Brethren. It was published in Wittenberg in 1573.

"Das Weizenkorn muss sterben" is a poem by Lothar Zenetti, based on The Grain of Wheat. With a 1972 melody by Johann Lauermann, it became a Christian hymn of the genre Neues Geistliches Lied (NGL), appearing from 1975 in German hymnals. It is popular, and is regarded as Zenetti's signature work.

"Ik sta voor U in leegte en gemis" is a Christian hymn with Dutch text by Huub Oosterhuis. The melody was composed by Bernard Huijbers.

"Nun lässest du, o Herr" is a Christian hymn by Georg Thurmair written in 1966 as a paraphrase of the Nunc dimittis canticle. It was part of the German Catholic hymnal Gotteslob of 1975 as GL 660 with a 16th-century melody by Loys Bourgeois. With this melody, it is also part of the Protestant hymnal Evangelisches Gesangbuch as EG 695. It is part of the second edition of the Gotteslob as GL 500, with a new 1994 melody.

"O Licht der wunderbaren Nacht" is a Christian Easter hymn by Georg Thurmair written in 1963. It was part of the German Catholic hymnal Gotteslob of 1975 as GL 208, with a melody from the 14th century. It is part of the second edition of the Gotteslob as GL 334, also of regional sections of the Protestant hymnal Evangelisches Gesangbuch.

"Seht, er lebt" is a Christian poem written by the Catholic priest Lothar Zenetti in 1973. With an Israeli melody, it became an Easter hymn in the Neues Geistliches Lied (NGL) genre, first published in 1975. In the 2013 Catholic hymnal Gotteslob, it appears as GL 781 in the regional section for the Diocese of Limburg.

"Liebster Jesu, wir sind hier" is a Lutheran hymn with text written by Tobias Clausnitzer in 1663, and a hymn tune, Zahn No. 3498b, based on a 1664 melody by Johann Rudolph Ahle. A prayer for illumination, it is suitable for the opening of a church service and to be sung before a sermon. The song is part of the Protestant hymnal Evangelisches Gesangbuch as EG 161. It is also part of the Catholic hymnal Gotteslob as GL 149. It is popular also in English translations such as "Blessed Jesus, at your word" by Catherine Winkworth.

"Das Jahr steht auf der Höhe" is a Christian hymn in German with a text by Detlev Block written in 1978 to an older melody by Johann Steuerlein. In the modern German Catholic hymnal Gotteslob, it appears as GL 465. The hymn initially focuses on observing nature and then compares its transience to that of human life.

"Herr, wir bringen in Brot und Wein" is a Christian offertory hymn with German text by Hans Bernhard Meyer, and a melody by Peter Janssens. The song, of the genre Neues Geistliches Lied (NGL), is part of German hymnals, including Gotteslob, and songbooks.

"Komm, Herr, segne uns" is a Christian hymn in German in four stanzas with text and music by the Protestant pastor Dieter Trautwein, written in 1978. It is a hymn of the genre Neues Geistliches Lied (NGL), appearing in German hymnals of different denominations, including the Protestant Evangelisches Gesangbuch and the Catholic Gotteslob. It begins with the line "Komm Herr, segne uns, dass wir uns nicht trennen".

"Manchmal feiern wir mitten im Tag" is a Christian hymn written in 1974 with German text by Alois Albrecht and a melody by Peter Janssens. The song, of the genre Neues Geistliches Lied (NGL), is part of German hymnals, including Gotteslob, and songbooks including ecumenical collections and books for young people. It begins: "Manchmal feiern wir mitten im Tag ein Fest der Auferstehung".

"Selig seid ihr, wenn ihr einfach lebt" is a Christian hymn written in 1979. The song, of the genre Neues Geistliches Lied (NGL), is included in hymnals both Protestant and Catholic, and in other songbooks.