Meyer-Eppler was born in Antwerp. He studied mathematics, physics, and chemistry, first at the University of Cologne and then in Bonn, from 1936 until 1939, when he received a doctorate in Physics. From 1942 to 1945 he was a scientific assistant at the Physics Institute of the University of Bonn. From the time of his habilitation on 16 September 1942, he was also Lecturer in Experimental Physics. After the end of the war, Meyer-Eppler turned attention increasingly to phonetics and speech synthesis. In 1947 he was recruited by Paul Menzerath to the faculty of the Phonetic Institute of the University of Bonn, where he became Scientific Assistant on 1 April 1949. During this time, Meyer-Eppler published essays on synthetic language production and presented American inventions like the Coder, the Vocoder, the Visible Speech Machine. He contributed to the development of the electrolarynx, which is still used today for the speech-impaired. [1] [2]

In 1949, Meyer-Eppler published a book promoting the idea of producing music by purely electronic means, [3] and in 1951 joined the sound engineer/composer Robert Beyer and the composer/musicologist/journalist Herbert Eimert in a successful proposal to the Nordwestdeutscher Rundfunk (NWDR) for the establishment of an electronic-music studio in Cologne. After two years of work, it was officially opened with a broadcast lecture-concert on 26 May 1953, and was to become the most important such studio in Europe.

In 1952, Meyer-Eppler habilitated for the second time, which qualified him for a professorship in phonetics and communication research. At the end of 1957 he was appointed successor to Professor Menzerath, who had died in 1954. [2] During these years he published and lectured frequently on the subject of electronic music, introducing the term “aleatoric” with respect to concepts of statistical shaping of sounds based on his studies of phonology. [4] Amongst his students at the University of Bonn in 1954–56 was the composer Karlheinz Stockhausen, who was also working as an assistant in the Cologne electronic music studio, and whose compositions did the most to propagate Meyer-Eppler’s ideas.

In 1959, Meyer-Eppler published his most important work. [5] He died suddenly in Bonn of a kidney ailment from which he had been suffering for many years.

Aleatoricism or aleatorism, the noun associated with the adjectival aleatory and aleatoric is a term popularised by the musical composer Pierre Boulez, but also Witold Lutosławski and Franco Evangelisti, for compositions resulting from "actions made by chance", with its etymology deriving from alea, Latin for "dice". It now applies more broadly to art created as a result of such a chance-determined process. The term was first used "in the context of electro-acoustics and information theory" to describe "a course of sound events that is determined in its framework and flexible in detail", by Belgian-German physicist, acoustician, and information theorist Werner Meyer-Eppler. In practical application, in compositions by Mozart and Kirnberger, for instance, the order of the measures of a musical piece were left to be determined by throwing dice, and in performances of music by Pousseur, musicians threw dice "for sheets of music and cues". However, more generally in musical contexts, the term has had varying meanings as it was applied by various composers, and so a single, clear definition for aleatory music is defied. Aleatory should not be confused with either indeterminacy, or improvisation. 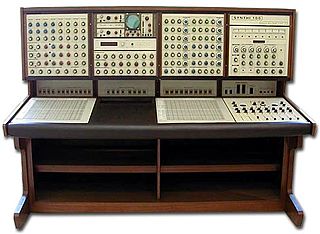 The EMS Synthi 100 was a large analogue/digital hybrid synthesizer made by Electronic Music Studios (London) Ltd, originally as a custom order from Radio Belgrade for what was to be the Radio Belgrade Electronic Studio, largely thanks to contact between composer Paul Pignon, then living in Belgrade, and Peter Zinovieff. The ground-breaking analogue and digital engineering was designed by David Cockerell and documented in detail in 1971. The cost at that time was £6,500. The last unit built by EMS was number 30. Afterwards, one final unit was built by Datanomics, who bought assets from EMS when the company folded in 1979. The redesigned unit was sold to Gabinete de Música Electroacústica, Cuenca, Spain.

Die Reihe was a German-language music academic journal, edited by Herbert Eimert and Karlheinz Stockhausen and published by Universal Edition (Vienna) between 1955 and 1962. An English edition was published, under the original German title, between 1957 and 1968 by the Theodore Presser Company in association with Universal Edition (London). A related book series titled "Bücher der Reihe" was begun, but only one title ever appeared in it, Herbert Eimert's Grundlagen der musikalischen Reihentechnik.

Harald Bode was a German engineer and pioneer in the development of electronic musical instruments.

Hermann Heiss was a German composer, pianist, and educator. His work was part of the music event in the art competition at the 1932 Summer Olympics.

Georg Heike is a German phonetician and linguist.

Artikulation is an electronic composition by György Ligeti. Composed and notated in January and February 1958, the piece was prepared and recorded on magnetic tape from February to March with the assistance of Gottfried Michael Koenig and Karlheinz Stockhausen's assistant, Cornelius Cardew, at the Studio for Electronic Music of the West German Radio (WDR) in Cologne. The piece consists of various types of sounds, "in conditions of aggregation." It "can be heard as a conversation without words." Ligeti explains in notes to the listening score :

The piece is called 'Artikulation' because in this sense an artificial language is articulated: question and answer, high and low voices, polyglot speaking and interruptions, impulsive outbreaks and humor, charring and whispering.