West Pomeranian Voivodeship is the fifth largest voivodeship of Poland in terms of area. Among the largest cities, of the region, are the capital Szczecin, as well as Koszalin, Stargard, and Świnoujście.

This is a picturesque region of the Baltic Sea coast, with many beaches, lakes and woodlands. Szczecin, Świnoujście and Police are important ports. Other major seaside towns include Międzyzdroje, Dziwnów, Kołobrzeg, and Mielno.

West Pomerania is considered one of the greenest regions of Poland, and one of the most attractive for tourists. It is characterized by incredible diversity of the landscape: beaches, hundreds of lakes, and forests full of wildlife (e.g. Wkrzanska Forest), spreading mainly up the hills of the glacial lakes areas. West Pomerania is also rich in various forms and styles of architecture that were built during the Middle Ages as well as the Gothic, Baroque, and Renaissance periods. There is a diverse repertoire of theaters, festivals, museums and galleries. During a few-day long annual Sea Festival in Szczecin, a number of free open-air concerts take place. In Świnoujście during the summer, the FAMA Academic Youth Arts Festival takes place – an event with several years of tradition, which attracts not only young people but also older alumni. In Międzyzdroje, there is a Festival Of The Stars, which draws many popular actors. In Wolin, a Viking Festival takes place, which draws "Vikings" from all across Europe.

Another draw to the area is a wide array of health resorts. Brine and peloid, discovered in the 19th century, together with geothermal water resources, are popular attractions in Świnoujście, Kamień Pomorski and Połczyn Zdrój.

A notable phenomenon on a worldly scale is the Crooked Forest outside the town of Gryfino.

The voivodeship contains 5 cities and 61 towns. These are listed below in descending order of population (according to official figures for 2019): [6]

The Polish districts of the historical region Western Pomerania (the 3 westernmost districts of the West Pomeranian Voivodeship) had a population of about 520,000 in 2012 (cities of Szczecin, Świnoujście and Police County combined) – while the German districts had a population of about 470,000 in 2012 (Vorpommern-Rügen and Vorpommern-Greifswald combined). So overall, about 1 million people live in the historical region of Western Pomerania today, while the Szczecin agglomeration reaches even further.

West Pomeranian Voivodeship is divided into 21 counties (powiats): 3 city counties and 18 land counties. These are further divided into 114 gminas.

The counties are listed in the following table (ordering within categories is by decreasing population in 2019): [6]

Protected areas in West Pomeranian Voivodeship include two National Parks and seven Landscape Parks. These are listed below.

After Germany's defeat in World War II, the region became part of Poland by way of the Potsdam Agreement, which created territorial changes demanded by the Soviet Union.

In 1948 67 percent of the populace originated from Central Poland, Greater Poland and Pomeralia while 25 percent came from the Polish areas annexed by the Soviet Union. Another 6 percent returned to Poland from Western Europe. About 50,000 Ukrainians were forcefully resettled to West Pomerania in the Operation Vistula in 1947. [7]

Main railways in the province are line no. 351 Szczecin-Poznań, line no. 273 Szczecin-Wrocław (so-called “Odra railway”), line no. 202 Stargard-Gdańsk, line no. 401 Szczecin-Świnoujście and line no. 404 Kołobrzeg-Szczecinek. The main railway stations of the province are Szczecin main station, Stargard and Koszalin. The stations are served by fast PKP Intercity trains which connect them with the capital Warsaw, as well as other major Polish cities. In addition to these fast express services, inter-regional trains and intra-regional trains are operated by the firm Przewozy Regionalne. Szczecin main station possesses international train connections with Berlin, Schwerin and Lübeck (operated by DB Regio). Świnoujście has a direct train connection with Stralsund, which is operated by Usedomer Bäderbahn.

The only domestic and international airport in West Pomeranian Voivodeship is Szczecin-Goleniów "Solidarność" Airport. Also, part of the runway of an abandoned airport in Bagicz (near Kołobrzeg) was converted to an airport licensed to service planes carrying not more than 20 passengers on board. 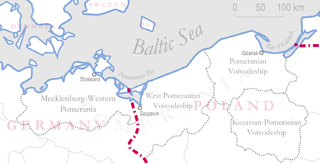 Wolin is the name both of a Polish island in the Baltic Sea, just off the Polish coast, and a town on that island. Administratively, the island belongs to the West Pomeranian Voivodeship. Wolin is separated from the island of Usedom (Uznam) by the Strait of Świna, and from mainland Pomerania by the Strait of Dziwna. The island has an area of 265 km2 (102 sq mi) and its highest point is Mount Grzywacz at 116 m above sea level. The number of inhabitants is 30,000. 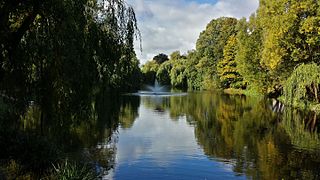 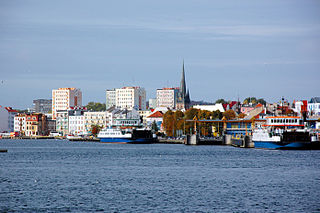 Świnoujście is a city in Western Pomerania and seaport on the Baltic Sea and Szczecin Lagoon, located in the extreme north-west of Poland. Situated mainly on the islands of Usedom and Wolin, it also occupies smaller islands. The largest is Karsibór island, once part of Usedom, now separated by the Piast Canal, formerly the Kaiserfahrt, dug in the late 19th century to facilitate ship access to Szczecin. 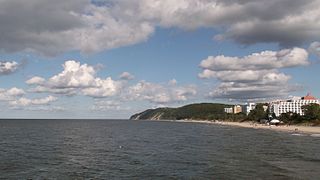 Międzyzdroje, in English known as Misdroy, is a city and a seaside resort in northwestern Poland on the island of Wolin on the Baltic coast. The city is located in the West Pomeranian Voivodeship, and is a seat of the Kamień County and the municipality of Międzyzdroje. In 2016, it was inhabited by around 5,500 people.

Goleniów is a town in Pomerania, northwestern Poland with 22,399 inhabitants (2004). It is the capital of Goleniów County in West Pomeranian Voivodeship ; previously it was in Szczecin Voivodeship (1975–1998). Town area is 12.5 square kilometres (4.8 sq mi), geographical situation 53°33'N and 14°49'E. It is situated in the centre of Goleniowska Forest on Goleniów Plain, near main roads numbers 3 and 6.

Białogard is a historic town in Middle Pomerania, northwestern Poland, with 23,811 inhabitants as of June 2021. The capital of Białogard County in the West Pomeranian Voivodeship since 1999, the town was previously in Koszalin Voivodeship (1950–1998). It is the most important railroad junction of Middle Pomerania, which links Kołobrzeg with Piła and Gdańsk with Stargard. 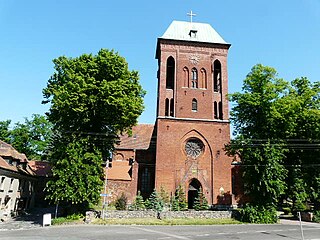 The Bishopric of Cammin was both a former Roman Catholic diocese in the Duchy of Pomerania from 1140 to 1544, and a secular territory of the Holy Roman Empire (Prince-Bishopric) in the Kolberg (Kołobrzeg) area from 1248 to 1650.

Gmina Międzyzdroje or Gmina Misdroy is an urban-rural gmina in Kamień County, West Pomeranian Voivodeship, in north-western Poland. Its seat is the town of Międzyzdroje, which lies approximately 23 kilometres (14 mi) west of Kamień Pomorski and 58 km (36 mi) north of the regional capital Szczecin.

Expressway S6 is a major road in Poland which has been planned to run from the A6 autostrada in Szczecin, through Goleniów in West Pomerania to Gdańsk parallel to the Baltic coast, forming the main connection between Gdańsk and Szczecin. 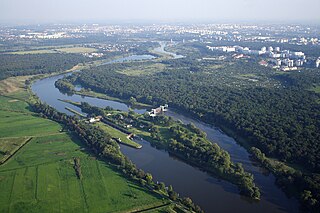 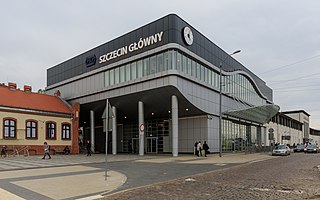 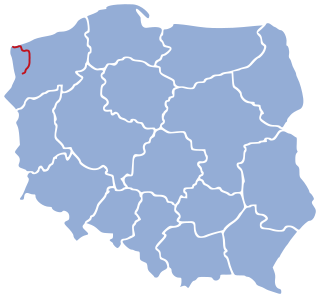 The Szczecin–Świnoujście railway is a Polish 100-kilometre long railway line, that connects Szczecin with the port in Świnoujście. The railway is part of European TEN-T route E59 from Scandinavia to Vienna, Budapest and Prague. For this reason the classification of the PLK line is also in the "first-class" category. 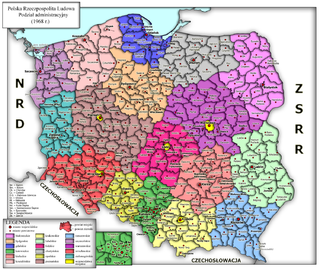 Wolin County was a county of Szczecin Voivodeship, in the Polish People's Republic. It comprised Wolin, the eastern part of Usedom, and other smaller sournding islands. Its capital was Świnoujście. It existed from 1945 to 1973.

The Szczecin Voivodeship was a voivodeship (province) with capital in Szczecin, that was centered on the Farther Pomerania. It existed from 1946 to 1975. Until 19 February 1947 it was under the administration of Provisional Government of National Unity, which then was replaced by the Polish People's Republic. It was established on 28 June 1946, when it was formed from the territory of the District of the Western Pomerania, and parts of the Gdańsk, and Pomeranian Voivodeships. On 6 July 1950, its eastern half was incorporated into then-established Koszalin Voivodeship, and the voivodeship ceased to exist on 31 May 1975, when it was replaced by then-established Szczecin and Gorzów Voivodeships.