Westbourne Grove is a retail road running across Notting Hill, an area of west London. Its western end is in the Royal Borough of Kensington and Chelsea and its eastern end is in the City of Westminster; it runs from Kensington Park Road in the west to Queensway in the east, crossing over Portobello Road. It contains a mixture of independent and chain retailers, [1] and has been termed both "fashionable" and "up-and-coming". [2]

The Notting Hill Carnival passes along the central part of Westbourne Grove.

There are a number of popular shopping destinations located on Westbourne Grove and adjoining streets, pre-eminently: Portobello Market, Queensway and Ledbury Road.

On 9 August 1997, authoritative weekly newsagent-magazine Time Out featured West London, selecting Westbourne Grove as the half-city's representative: "Seeking a key shopping road symbolic of western aspirations, we decided that preposterously fashionable Westbourne Grove, or 'Westbourne Village', has it all. It was here that Madonna headed during breaks in filming "Evita" - to the funky boutiques, the avant-garde florists, the designer jewellery and futuristic furniture (at millennial prices)."

In February 2004, the London Plan was first issued and, paired with Queensway, designated Westbourne Grove as one of Greater London's major centres. [3]

Around 2007, the road's eastern Bayswater-end, underwent a rapid period of transformation, east of Chepstow Road. Upon lease expiry, rents increased significantly and pricing-out many incumbent family businesses, which were replaced by fashionable / prestige restaurants and shops.[ citation needed ]

The development of Westbourne Grove began in the 1840s and proceeded from the east (which lay in Bayswater) to the west, where it became the principal east–west artery into the Ladbroke Estate. The far western end of the street only became known as Westbourne Grove relatively recently in 1938, having previously been called Archer Street. In 1929, the novelist A.J. Cronin opened his own medical practice at 152 Westbourne Grove.

There was a small settlement to the north of what is now Westbourne Grove at Westbourne Green. It had five main houses. The largest of these was Westbourne Place or Westbourne House, which was rebuilt in 1745 by the architect Isaac Ware as an elegant Georgian mansion of three storeys with a frontage of nine windows divided into three parts. The central third was topped by a large pediment and contained the main door, which also had a pediment over it. The lower two storeys were formed into bays at each end, which contained three windows each. Amongst the well-known residents of this house were Sir William Yorke, baronet; the Venetian ambassador; the architect Samuel Pepys Cockerell (a great great nephew of the diarist Samuel Pepys); and the General Commander in Chief of the Army, Viscount Hill, who left in 1836 (and who gave his name to the modern road bridge north of Westbourne Grove called Lord Hill's Bridge). The house was demolished in 1836 to make way for the houses and gardens of what is now Westbourne Park Villas. Thomas Hardy lived in this area, mainly at no 16 Westbourne Park Villas, which was his home 1863–67.

Also north of what is now Westbourne Grove was Westbourne Farm which was the home, between 1815 - 1817, of the actress Sarah Siddons, who lived there with her daughter. The Farm was at the point where the Harrow Road, the Westway and the canal converge. Mrs Siddons was buried at St Mary's Church, the main church of Paddington, on Paddington Green, where her grave can still be seen.

Though now popular and expensive for home-buyers, much of the area had become run-down in the 1950s, when it was the centre of the activities of notorious slum landlord Peter Rachman, after whom the phrase "Rachmanism" was coined. He was known for his violent evictions of tenants with legally fixed rents. He replaced them—in what had become overcrowded multi-occupied housing—mainly with recent migrants from the West Indies who, because of discrimination and council tenant restrictions, could not find accommodation. He operated from an office in Westbourne Grove. [5] Part of the area, including streets between Ledbury Rd & Shrewsbury Road to the south of Westbourne Park Road, became derelict and was consequently compulsorily purchased and demolished. [6]

Notting Hill Post Office, in Westbourne Grove, finally closed in a storm of controversy during early 2005. However, the Royal Mail retained its sorting office on the site.

John Lanchester, in The Guardian (6 January 2012), observed Westbourne Grove to be "an area that in the last couple of decades has gone from slightly rough to full-on trustafarian to total bankerisation." [7]

Bayswater is an area within the City of Westminster in West London. It is a built-up district with a population density of 17,500 per square kilometre, and is located between Kensington Gardens to the south, Paddington to the north-east, and Notting Hill to the west. 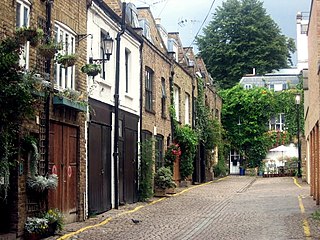 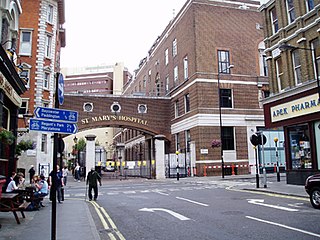 Paddington is an area within the City of Westminster, in Central London. First a medieval parish then a metropolitan borough, it was integrated with Westminster and Greater London in 1965. Three important landmarks of the district are Paddington station, designed by the engineer Isambard Kingdom Brunel and opened in 1847; St Mary's Hospital; and the former Paddington Green Police Station.

Bayswater is a London Underground station in the Bayswater area of the City of Westminster. The station is on the Circle and District lines, between Notting Hill Gate and Paddington stations and is in Travelcard Zone 1. It is less than 100 metres (330 ft) away from the Central line's Queensway station.

Portobello Road is a street in the Notting Hill district of the Royal Borough of Kensington and Chelsea in west London. It runs almost the length of Notting Hill from south to north, roughly parallel with Ladbroke Grove. On Saturdays it is home to Portobello Road Market, one of London's notable street markets, known for its second-hand clothes, pastries and antiques. Every August since 1996, the Portobello Film Festival has been held in locations around Portobello Road and, in 2015, Portobello Radio was founded as the area's community radio station. 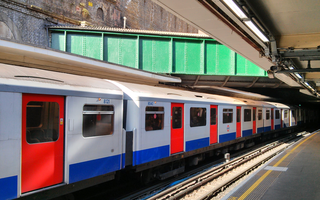 The Westbourne or Kilburn is a culverted small River Thames tributary in London, rising in Hampstead and Brondesbury Park and which as a drain unites and flows southward through Kilburn and Bayswater to skirt underneath the east of Hyde Park's Serpentine lake then through central Chelsea under Sloane Square. It passes centrally under the south side of Royal Hospital Chelsea's Ranelagh Gardens before discharging into Inner London's old-fashioned, but grandiose combined sewer system, with exceptional discharges into the Inner London Tideway. Since the latter 19th century, the population of its catchment has risen further but to reduce the toll it places on the Beckton Sewage Treatment Works and related bills its narrow basin has been assisted by private soakaways, and public surface water drains. Its depression has been replaced with and adopted as a reliable route for a gravity combined sewer. The formation of the Serpentine relied on the water, a lake with a long, ornate footbridge and various activities associated, which today uses little-polluted water from a great depth. 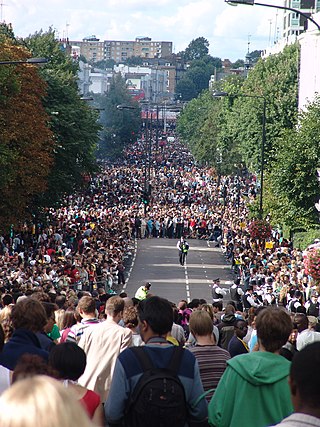 Ladbroke Grove is an area and a road in West London in the Royal Borough of Kensington and Chelsea, passing through Kensal Green and Notting Hill, running north–south between Harrow Road and Holland Park Avenue. 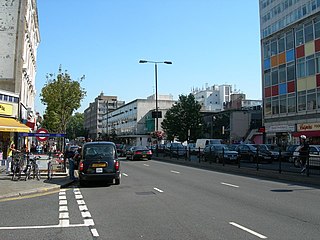 Notting Hill Gate is one of the main thoroughfares of Notting Hill, in the Royal Borough of Kensington and Chelsea. Historically the street was a location for toll gates, from which it derives its modern name.

Ossington Street is a quiet one-way street in London, W2, leading from Moscow Road at its north end to the Bayswater Road / Notting Hill Gate at its south end. 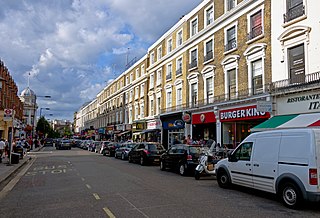 Queensway is a shopping street in Bayswater, an area of west London. It is home to Whiteleys, many restaurants, cafés, pubs, souvenir shops and a few high-street retail chains. Queensway and Westbourne Grove are identified in the London Plan as one of 35 major centres in Greater London. The street is numbered the B411 in the British road numbering scheme. Queensway is currently undergoing a major redevelopment on all sides, with a building on the top of the road being developed for £500m, Whiteleys for £1.2BN and a series of other redevelopments happening at the same time. 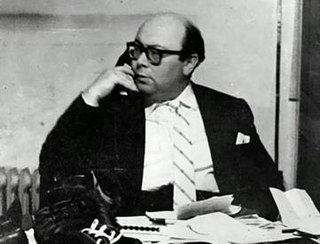 Perec "Peter" Rachman was a Polish-born landlord who operated in Notting Hill, London, England in the 1950s and early 1960s. He became notorious for his exploitation of his tenants, with the word "Rachmanism" entering the Oxford English Dictionary as a synonym for the exploitation and intimidation of tenants. 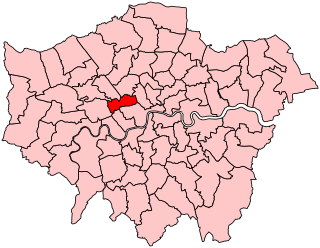 Westbourne is an area west of Paddington in west London. It has a manorial history spanning many centuries, within a more broadly defined Paddington, before shedding its association in the mid-19th century. It is named after the west bourne, West Bourne, or River Westbourne, a Thames tributary which was encased in 19th-century London in the 1850s. The spring-fed stream and associated manor have led to the place names Westbourne Green, Westbourne Park and more narrowly: Westbourne Gardens, Westbourne Grove, Westbourne Park Road, Westbourne Park tube station, Westbourne Studios and the name of a public house.

Ledbury Road is situated near Notting Hill Gate and within the area known as Portobello. The road is intersected by Westbourne Grove.

Golborne Road is a street in the Royal Borough of Kensington and Chelsea in London's Kensal Town. The road runs east from Portobello Road to Kensal Road.

Leinster Square and Prince's Square are mirroring garden squares in Bayswater on the cusp of Westbourne and Notting Hill. One street overlaps the two squares. It is within the large additions of 1965 to the City of Westminster, London, W2.