Hamilton and Millicent both had jumpers similar to Collingwood's, so an agreement was made that the team that finished lower on the ladder for 1964 had to change jumpers. Hamilton finished ninth, while Millicent finished 11th of 12, so Millicent was forced to change to the St Kilda strip.

In 2011, the Heywood Football Club left the Western Border Football League due to the club struggling to compete with the larger town clubs in the league. Their first application to leave was rejected, so they were forced to go to higher levels at the VCFL to resolve issues between the League and the Heywood Football Netball Club.

In 2012, the Hamilton and Hamilton Imperials club merged upon recommendation from the VCFL and competed in the Hampden Football Netball League from 2013. Portland also transferred to the Hampden Football Netball League for 2013, leaving just 6 teams in the competition today. Casterton merged with neighbouring club Sandford (from the South West District Football League) in 2014. When the VFL had zoning from 1968 to 1986 the league was allocated to Collingwood.

Notes
1 As the Casterton Football Club

Mount Gambier is the second most populated city in South Australia, with an estimated urban population of 33,233 as of 2021. The city is located on the slopes of Mount Gambier, a volcano in the south east of the state, about 450 kilometres (280 mi) south-east of the capital Adelaide and just 17 kilometres (11 mi) from the Victorian border. The traditional owners of the area are the Bungandidj people. Mount Gambier is the most important settlement in the Limestone Coast region and the seat of government for both the City of Mount Gambier and the District Council of Grant.

Heywood is a town on the Fitzroy River in the Australian state of Victoria. It is situated at an elevation of 27 metres amidst rolling green hills in an agricultural, pastoral and timbercutting district. Heywood is 357 kilometres (222 mi) west of Melbourne at the intersection of the Princes and Henty Highways and 27 kilometres (17 mi) north of Portland. It is on the railway line to Portland, at the junction of the presently-unused branch to Mount Gambier, South Australia. The winner of several past "Tidy Town" awards, it is often referred to as the "Jewel of the Southwest".

Casterton is a town in Victoria, Australia, located on the Glenelg Highway, 42 kilometres east of the South Australian border, in the Shire of Glenelg. The Glenelg River passes through the town. Casterton is named after the village of Casterton in south-east Cumbria in England.

Glenelg Highway is a rural highway in south-eastern Australia, linking Mount Gambier with Ballarat. Most of the highway is located within the Western part of the state of Victoria, though a short, 15 km stretch from the South Australia/Victoria state border near Ardno to Glenburnie is located in South Australia. Some maps identify the South Australian stretch as Casterton Road. Major towns along its route include Casterton, Coleraine and Hamilton.

Nick Daffy is a former Australian rules football player who played in the AFL between 1992 and 2001 for the Richmond Football Club and then played one game in 2002 for the Sydney Swans Football Club.

John Yeates is a former Australian rules footballer who played with Geelong in the Victorian Football League (VFL). 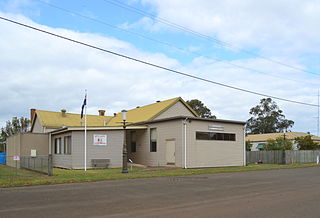 Branxholme is a township in the Shire of Southern Grampians in the Western District of Victoria, Australia on the Henty Highway between Heywood and Hamilton. At the 2016 census, Branxholme and the surrounding area had a population of 351. 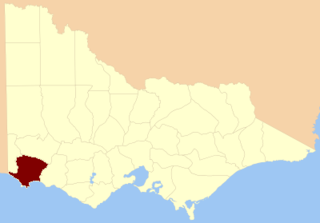 The County of Normanby in Victoria, is one of the 37 counties of Victoria which are part of the cadastral divisions of Australia, used for land titles. The county is in the Western District of Victoria bounded by the Glenelg River in the west and the Eumeralla River in the east, by a line through Casterton and Hamilton in the north, and by Bass Strait to the south. Larger towns include Hamilton, Portland and Heywood. The county was proclaimed in 1853, but it was known earlier since the 1849 proclamation of Follett County and Dundas County referred to its boundaries.

The Portland Football Netball Cricket Club, nicknamed the Tigers, is an Australian sports club based in the city of Portland, Victoria. The club's football and netball teams currently compete in the Hampden Football Netball League, with the football squad having joined it in 2013 along with the Hamilton Kangaroos.

Michael Horsburgh is a former Australian rules footballer who played with Collingwood in the Victorian Football League (VFL).

The Casterton News is an English language newspaper published weekly in the town of Casterton, Victoria, Australia. 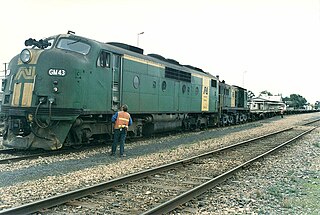 Mount Gambier railway station was the junction station for the Naracoorte–Millicent and Mount Gambier-Heywood lines in the South Australian city of Mount Gambier. It was last used in 2006, and has since been transformed into a public community space.

The South Gambier Football & Netball Club is an Australian rules football and netball club from Mount Gambier, South Australia. They are currently competing in the Western Border Football League.

The East Gambier Football & Netball Club is an Australian rules football and netball formed in 1938 that currently competes in the Western Border Football League. 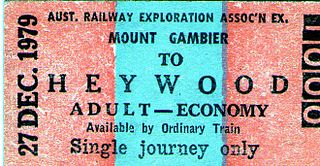 Mount Gambier–Heywood railway line is a 5 ft 3 in line located in Australia which operated from 27 November 1917 to 11 April 1995 between Mount Gambier in the state of South Australia and Heywood in the state of Victoria. It is one of two railway lines built by both state governments following an agreement in 1912 to connect to each other's railway networks. There has been calls for standardisation over the past two decades from Heywood to Wolseley since the Melbourne to Adelaide line was converted in 1995.