Whatawhata, previously also spelt Whata Whata, is a small town in the Waikato region on the east bank of the Waipā River, at the junction of State Highways 23 and 39, 12 km (7.5 mi) from Hamilton. Te Araroa tramping route passes through Whatawhata. [1]

Whatawhata was a Ngāti Māhanga village [2] and there are still Te Papa-o-Rotu and Ōmaero maraes on the west bank of the river. [3] In early colonial times Whatawhata was one of many sites in Waikato with a flour mill. [4] It was built in 1855 [5] and producing flour by the end of that year. [6] The area must have been suited to wheat, for there was another mill about 4 km (2.5 mi) downstream, at Karakariki, by 1860. [7]

British troops arrived at Whatawhata over land and by river, as part of the Invasion of the Waikato, on 28 December 1863. [8] Whatawhata was described as having no end of peach trees, which the soldiers stripped of their fruit. [9] Within a year a telegraph line had been built. [10]

A 1915 guide described Whatawhata as, "six miles from Frankton Junction, along a good metalled road. Coaches run to and from Frankton Junction daily, the fares being 2/- single and 3/6 return. The principal industries are farming and dairying. There is one hotel in the township, also school, and post and telegraph office. Small steamers ply up and down the river from Huntly, the waters being navigable as far up as Pirongia. Whatawhata was in the early days an important Maori centre, having at one time a native population of over a thousand." [11]

Since then the post office has been replaced by a petrol station and dairy, the coach has become 4 per day and the river is rarely disturbed by any craft. Also the AgResearch hill-country research station at Whatawhata was started in 1949. [12]

An 1880 guide said, "It is about ten miles distant from Hamilton, but a sum of money has been voted for making a direct road through a large swamp, which will bring the Hamilton station within six miles of the township. The road to Raglan crosses the, Waipā River here, and a bridge will shortly be built, when the ferry, which is now worked by natives, will be done away with. Heavy goods, such as timber, wire and manure, are brought up by the Waikato Steam Navigation Company's steamers. . . There is a convenient school in the township, where there is an average attendance of nearly forty children. The school-house and teacher's residence, erected a short time ago (1877) by the Board of Education, the settlers contributing largely towards them, are excellent buildings . . . two stores, a bakery, and comfortable hotel. Of this last Mr. G. T. M. Kellow is proprietor. He has good accommodation and stabling, and keeps excellent liquors . . . Mr,W. H. Bailey has a general store and bakery. . . convenient to the Raglan and Whatawhata bridge site. . . Mr. Day has a farm| of 1,000 acres . . . five acres in oats and the same in mangold . . . wheat thirty acres . . . a large dairy . . . pigs . . . trees are kahikatea and rimu, with a little matai . . . Whatawhata racecourse . . . runs right round the township" [22]

The proportion of people born overseas was 12.7%, compared with 27.1% nationally. 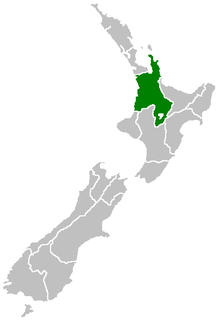 Raglan is a small beachside town located 48 km west of Hamilton, New Zealand on State Highway 23. It is known for its surfing, and volcanic black sand beaches. 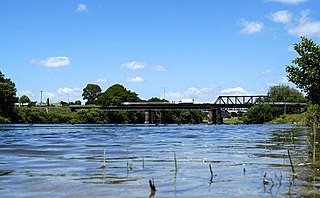 Tuakau is a town in the Waikato region at the foot of Bombay hills, formerly part of the Auckland Region until 2010, when it became part of Waikato District in the North Island of New Zealand. The town serves to support local farming, and is the residence of many employees of New Zealand Steel at Glenbrook. 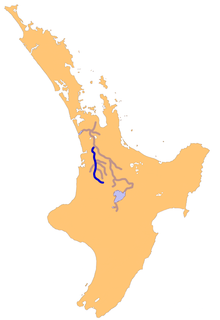 The Waipā River is in the Waikato region of the North Island of New Zealand. The headwaters are in the Rangitoto Range east of Te Kuiti. It flows north for 115 kilometres (71 mi), passing through Ōtorohanga and Pirongia, before flowing into the Waikato River at Ngāruawāhia. It is the Waikato's largest tributary. The Waipā's main tributary is the Puniu River. 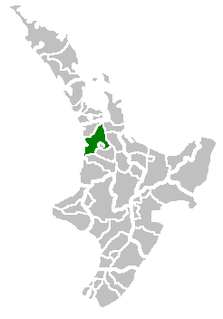 Otorohanga is a north King Country town in the Waikato region in the North Island of New Zealand. It is located 53 kilometres (33 mi) south of Hamilton and 18 kilometres (11 mi) north of Te Kuiti, on the Waipā River. It is a service town for the surrounding dairy-farming district. It is recognised as the "gateway" to the Waitomo Caves and as the "Kiwiana Town" of New Zealand. Until 2007, Otorohanga held a yearly 'Kiwiana Festival.' 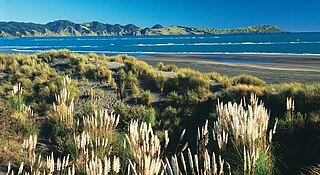 Kawhia Harbour is one of three large natural inlets in the Tasman Sea coast of the Waikato region of New Zealand's North Island. It is located to the south of Raglan Harbour, Ruapuke and Aotea Harbour, 40 kilometres southwest of Hamilton. Kawhia is part of the Ōtorohanga District Council and is in the King Country. It has a high-tide area of 68 km2 (26 sq mi) and a low-tide area of 18 km2 (6.9 sq mi).

Te Kauwhata is a small town in the north of the Waikato region of New Zealand, situated close to the western shore of Lake Waikare, some 40 km north of Hamilton and approximately 58 km south of Manukau City.

Waikato Tainui, Waikato or Tainui is a group of Māori iwi based in Waikato Region, in the western central region of New Zealand's North Island. It is part of the larger Tainui confederation of Polynesian settlers who arrived to New Zealand on the Tainui waka. The tribe is named after the Waikato River, which plays a large part in its history and culture.

Ngāti Te Wehi is a Māori iwi (tribe) based in Kawhia on the west coast of New Zealand's North Island.

State Highway 39 (SH 39) is a New Zealand state highway that forms a western bypass of the city of Hamilton. Gazetted in 1999, it is a generally quicker route to get between Auckland and New Plymouth as well as connecting to the Waitomo Caves, just south of the SH 39 southern terminus. The southernmost 14 km section has a concurrency with SH 31, as this highway has existed for much longer.

Whitikahu is a settlement scattered along Whitikahu Rd in the Waikato District and Waikato region of New Zealand's North Island.

Ngāti Māhanga is a Māori iwi (tribe) that is part of the Waikato confederation of tribes . The tribe's historical lands extended from Whaingaroa Harbour to the west bank of the Waikato River in the city of Hamilton, New Zealand. The Waikato land confiscation of 1864 meant that Ngāti Māhanga and their associated hapū were pushed to west of the Waipā River.

Hauturu is a village near the eastern shores of the Kawhia Harbour, in the Otorohanga District and Waikato region of New Zealand's North Island.

Waitetuna is a rural community in the Waikato District and Waikato region of New Zealand's North Island. It is located on the valley of the Waitetuna River, upstream from the Raglan Harbour.