The BBC sold the majority of buildings on the site in 2015 and it was renamed White City Place by owners Stanhope and Mitsui Fudosan. [1] [2]

The first building on the site, BBC White City, was designed by architects Scott Brownrigg & Turner and was opened in 1990. [3] Built on the site of the 1908 Franco-British exhibition, White City was constructed on the location of the former White City Stadium (The Great Stadium) used for the 1908 Summer Olympics. The stadium was demolished in 1985 and parts of the Olympic swimming pool were also discovered when the foundations of the new building were laid. [4]

The building was originally intended to be a new home for BBC Radio, replacing Broadcasting House. [5] This plan was scrapped and the building instead became office space with fifty edit suites, various Television production teams, the Digital Switchover team, BBC Academy, the Children in Need charity and parts of Operations and HR, as well as a large restaurant. [6]

It housed most of the BBC's current affairs and factual and learning programmes, such as Panorama , Top Gear (where it featured in a segment about the Peel P50 [7] ), Watchdog and many others. The BBC vacated the building in March 2013 and sold it to developers. [6] It has sometimes been referred to as White City One to distinguish it from the wider site. [8]

Architectural critic Jonathan Glancey wrote in The Guardian in 2002 that by comparison to the "handsome, if timeworn ships of the line" such as Broadcasting House and Bush House, White City was "a tin-pot freighter, inefficient, ugly, and old before its time." [9] Rachid Errtibi, a facilities coordinator at the BBC reflected that "most staff disliked the White City building for one reason or another [but] the building did have a unique character, and was flexible enough to accommodate any new departments at short notice - achieved simply and quickly by putting up a few glass partition panels and rearranging furniture, at minimum cost." [6] [10]

Construction of the second phase of the development began in September 2001 and the site was officially opened in May 2004 and was known as the Media Village. [2] It consists of five further buildings in addition to White City One - Media Centre, Broadcast Centre, Energy Centre, Garden House and the Lighthouse. [11] The buildings were designed by Allies and Morrison Architects and Buro Happold and built by Bovis Lend Lease. In addition to BBC offices, the site included a post office, a Tesco Express, a Starbucks, a Davy's wine bar and several other retail outlets, many of which have now been replaced. [3] [11] To pay for construction costs, the BBC signed a 30-year deal with Land Securities Trillium, Britain's largest property developer. [3] [11]

The rear of Media Centre included gardens designed by Christopher Bradley-Hole. [3] A poem Voices of White City by Poet Laureate Andrew Motion was inlaid into the paving in the piazza. [3] The site featured artworks such as Simon Patterson's art wall in Broadcast Centre which is based on First World War dazzle camouflage and Yuko Shiraishi's mural in Media Centre reception. She was also responsible for the overall colour scheme in both buildings. [3] [12] Energy Centre features the Olympic Rings as a marker of the finishing line of the 1908 Olympic marathon, with a plaque unveiled by IOC president Jacques Rogge in 2005. [13]

A further planned building, the Music Box, designed by Foreign Office Architects was scheduled for opening in 2006, but was cancelled[ why? ] before construction began. [14] It would have been a concert hall and recording venue for the BBC Symphony Orchestra and Chorus, the BBC Concert Orchestra and the BBC Singers. [3] [15]

In 2004, it was intended that the Garden House and Lighthouse would be leased by independent production companies working with the BBC. [3]

The Media Centre was the global headquarters for the BBC's for-profit publishing subsidiary BBC Worldwide from 2008 until 2015, when it moved into the former BBC News annex of Television Centre. [2] [16] Media Centre also housed various non-broadcast divisions of the BBC which had been moved from central London to make way for the redevelopment of Broadcasting House. [2] Media Centre was used for broadcasts of Watchdog and Rogue Traders as well as a filming location for The Thick of It . [2]

A number of BBC Television-making departments were located in Media Centre following the vacating of Television Centre in 2013 including Comedy, Entertainment & Events and Factual. The BBC then left Media Centre and Garden House, with staff relocated to Broadcast Centre, Broadcasting House, Grafton House and some to MediaCityUK in Salford. Media Centre and Garden House closed on 10 July 2015 following the sale to Stanhope and Mitsui Fudosan. It was stated that the BBC received £87 million for the sale. [8]

At the time of its closure in July 2015, Garden House was mainly occupied by Atos and associated sub-contractors' teams following the sale of BBC Technology to Siemens in 2004. [2]

Broadcast Centre continues to house BBC Design & Engineering staff, BBC Global News Ltd, some BBC Studios production staff (although most have moved back to Television Centre), Marketing and Audiences staff and Red Bee Media's digital television facilities from where channels including BBC One, Channel 4, Channel 5, BT Sport and many others are broadcast. The Energy Centre provides services to the entire site, and between 2008 and 2018 was the offices for the Top Gear television production team and the Top Gear magazine team. [10] They moved into the main BBC Studios offices in Broadcast Centre in 2018.

The One Show studio was located in the Energy Centre from 2007 to 2013 before moving to the newly built Peel Wing of Broadcasting House. [17] [18] [19] In March 2019, BBC Research & Development moved into the Lighthouse building, having vacated Centre House on Wood Lane. [20]

Under new owners Stanhope and Mitsui Fudosan, the site has been renamed White City Place and an extensive refurbishment and refitting of the vacated properties on the site has taken place. [21] [2] The former Media Centre was renamed to The MediaWorks [22] and a significant renovation of White City One, renamed to The WestWorks, changed its main entrance and introduced a row of shops facing the piazza. [23] 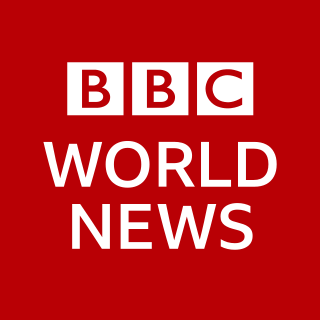 BBC World News is an international pay television channel that is operated by the BBC. The BBC is a public corporation of the UK government's Department for Digital, Culture, Media and Sport. It has the largest audience of any channel, with an estimated 121 million viewers weekly in 2016/2017, part of the estimated 372 million weekly audience of the BBC's four main international news services. Launched on 11 March 1991 as the BBC World Service Television outside Europe, its name was changed to BBC World on 16 January 1995 and to BBC World News on 21 April 2008. It broadcasts news bulletins, documentaries, lifestyle programmes and interview shows. Unlike the BBC's domestic channels, BBC World News is owned and operated by BBC Global News Ltd., part of the BBC's commercial group of companies, and is funded by subscription and advertising revenues, and not by the United Kingdom television licence. It is not owned by BBC Studios. The service is aimed at the overseas market, similar to CNN International, DW, NHK World, and RT.

Associated-Rediffusion, later Rediffusion London, was the British ITV franchise holder for London and parts of the surrounding counties, on weekdays between 22 September 1955 and 29 July 1968. It was the first ITA franchisee to go on air. The company arose from Rediffusion. 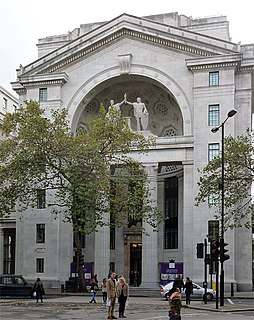 Bush House is a Grade II listed building at the southern end of Kingsway between Aldwych and the Strand in London. It was conceived as a major new trade centre by American industrialist Irving T. Bush, and commissioned, designed, funded, and constructed under his direction. The design was approved in 1919, work began in 1925, and was completed in 1935. Erected in stages, by 1929 Bush House was already declared the "most expensive building in the world". 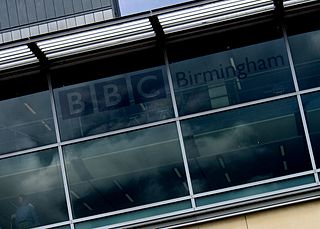 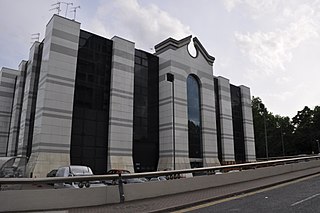 Marco Polo House was a large marble-effect, glass-clad office building and TV studio at 346 Queenstown Road, facing Battersea Park in the London Borough of Wandsworth. It was built in 1987–1988 and completed in 1989 by Peter Argyrou Associates, to a design by postmodernist architect and developer Ian Pollard through his property development company, Flaxyard. The building was demolished in 2014. 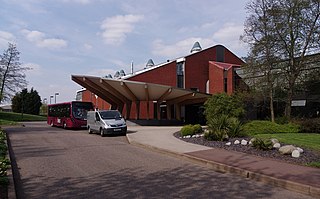 King's Meadow Campus is a university campus, that is part of the University of Nottingham, and is located in Nottingham. From 1983 until 2005, the complex was an ITV studio complex called East Midlands Television Centre and later Carlton Studios.

BBC Research & Development is the technical research department of the BBC. 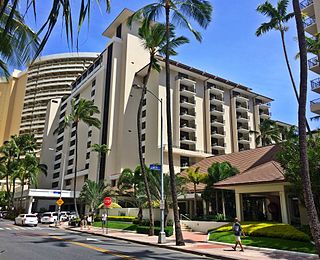 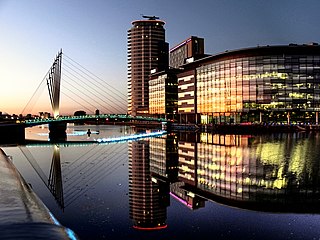 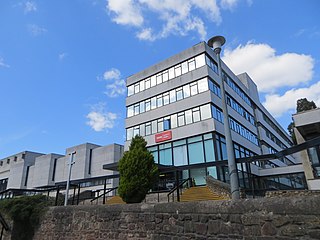 The British Broadcasting Corporation (BBC) is a British public service broadcaster, headquartered at Broadcasting House in Westminster, London. It is the world's oldest national broadcaster, and the largest broadcaster in the world by number of employees, employing over 22,000 staff in total, of whom more than 16,000 are in public sector broadcasting. The total number of BBC staff amounts to 35,402 including part-time, flexible, and fixed-contract staff. 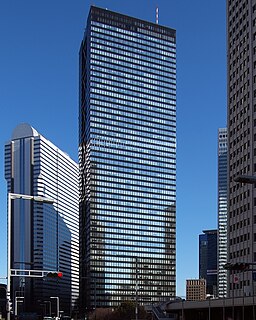 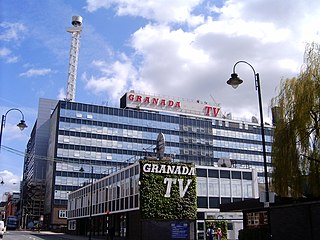 Granada Studios were television studios on Quay Street in Manchester with the facility to broadcast live and recorded programmes. They were the headquarters of Granada Television and later ITV Granada between 1956 and 2013. At the time of their closure, the studios were the oldest operating purpose-built television studios in the United Kingdom.

The BBC Wales Headquarters building, also known as New Broadcasting House, is a television studio and office in Central Square, Cardiff. It is operated by BBC Cymru Wales, and also serves as a base for S4C.