White Cliffs is a small town in outback New South Wales in Australia, in Central Darling Shire. White Cliffs is around 255 km northeast of Broken Hill, 93 km north of Wilcannia. At the 2021 census, White Cliffs had a population of 156. [1]

The primary school opened in 1895, and has operated continuously since then. White Cliffs was one of the many places visited by Bill Bryson in research for the book Down Under .

The town was established in the late 19th century when opal was discovered. Opal has been mined ever since. The first Australian opal was found 20 years before in Queensland in 1872, when a party of kangaroo hunters were operating in the White Cliffs area. One of them, who had left the party to track down a wounded kangaroo over some low stony hills, picked up a pretty stone which appealed to him. When taking back the stone, they suspected it could be opal which the local jeweller confirmed. He advised to get as much opal as possible since this could be more profitable than kangaroo hunting. When the group filed a claim, opal had not yet been listed under gemstones, and it was decided to file the claim under the "Gold Mining Act". [2]

Many of the residents live underground, using mining equipment to dig extensive homes in the hillside to avoid the intense heat outside. There are also two underground motels called The White Cliffs Underground and PJ's Bed And Breakfast, as the town is becoming more dependent on tourism.

Cricketer Bill O'Reilly was born in White Cliffs, the son of the first school teacher.

White Cliffs is the site of Australia's first solar power station. The White Cliffs Solar Power Station was built in 1981 producing 25 KWe and upgraded in 1996 to produce 45KWe using the same collector dishes but better technology.

White Cliffs has extremely hot summers and mild winters. Summers would usually exceed 36C. Winters are usually around 17C. The annual average rainfall is 249.7 millimetres (9.8 in) which would make it a semi-arid climate except that its high evapotranspiration, or its aridity, makes it a desert climate. 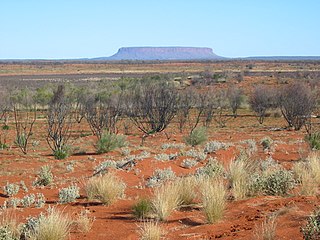 The Outback is a remote, vast, sparsely populated area of Australia. The Outback is more remote than the bush. While often envisaged as being arid, the Outback regions extend from the northern to southern Australian coastlines and encompass a number of climatic zones, including tropical and monsoonal climates in northern areas, arid areas in the "red centre" and semi-arid and temperate climates in southerly regions.

Clifton is a town in and is the county seat of Greenlee County, Arizona, United States, along the San Francisco River. The population of the town was 3,311 at the 2010 census, with a 2018 population estimate of 3,700. It was a place of the Arizona copper mine strike of 1983. 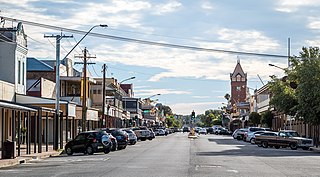 Broken Hill is an inland mining city in the far west of outback New South Wales, Australia. It is near the border with South Australia on the crossing of the Barrier Highway (A32) and the Silver City Highway (B79), in the Barrier Range. It is 315 m (1,033 ft) above sea level, with a hot desert climate, and an average rainfall of 235 mm (9 in). The closest major city is Adelaide, the capital of South Australia, which is more than 500 km (311 mi) to the southwest and linked via route A32. 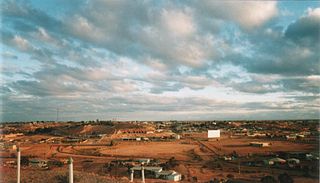 Coober Pedy is a town in northern South Australia, 846 km (526 mi) north of Adelaide on the Stuart Highway. The town is sometimes referred to as the "opal capital of the world" because of the quantity of precious opals that are mined there. Coober Pedy is renowned for its below-ground dwellings, called "dugouts", which are built in this fashion due to the scorching daytime heat. 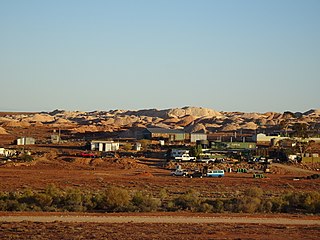 Andamooka is a town 600 km north of Adelaide in the Far North of South Australia on the lands of the Kuyani and Kokatha people. Andamooka is famous for high-quality crystal seam opal, opalised fossils, and stargazing Andamooka recently featured in Vogue Magazine's "Best Country Towns in Australia to visit next" 'For a real taste of the outback, Andamooka has what you need. The town's observatory has your star-gazing needs taken care of, but you can also go 'opal noodling', essentially fossicking for the gems in a town that was once a hub for the opal mining industry.'

Port Augusta is a small city in South Australia. Formerly a seaport, it is now a road traffic and railway junction city mainly located on the east coast of the Spencer Gulf immediately south of the gulf's head and about 322 kilometres (200 mi) north of the state capital, Adelaide. The suburb of Port Augusta West is located on the west side of the gulf on the Eyre Peninsula. Other major industries included, up until the mid-2010s, electricity generation. At June 2018, the estimated urban population was 13,799, having declined at an average annual rate of -0.53% over the preceding five years. 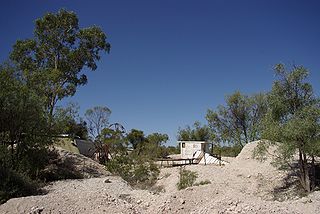 Lightning Ridge is a small outback town in north-western New South Wales, Australia. Part of Walgett Shire, Lightning Ridge is situated near the southern border of Queensland, about 6 km (3.7 mi) east of the Castlereagh Highway. The Lightning Ridge area is a world-renowned centre of the mining of black opal and other opal gemstones.

Quilpie is a rural town and locality in the Shire of Quilpie, Queensland, Australia. In the 2016 census, Quilpie had a population of 595 people. 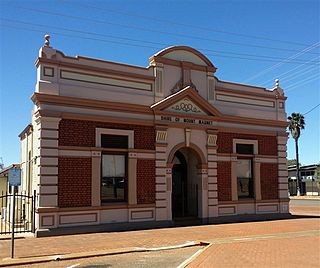 Mount Magnet is a town in the Mid West region of Western Australia. It is one of the region's original gold mining towns, and the longest surviving gold mining settlement in the state. The prominent hill that is adjacent to the current townsite was called West Mount Magnet in 1854 by explorer Robert Austin, having named a smaller hill 64 km away, East Mount Magnet. Both hills had an extremely high iron content which affected the readings of his compass. West Mount Magnet had its Aboriginal name reinstated by the Surveyor General in 1972, "Warramboo," meaning campfire camping place. The magnetic variation at Mount Magnet is zero: magnetic north equals true north.

Roxby Downs is a town and locality in the Australian state of South Australia about 511 kilometres (318 mi) north of the state capital of Adelaide. The town has a highly transient population of around 4,000 people. 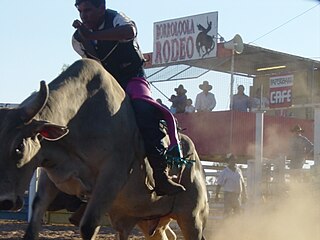 Borroloola is a town in the Northern Territory of Australia. It is located on the McArthur River, about 50 km upstream from the Gulf of Carpentaria. 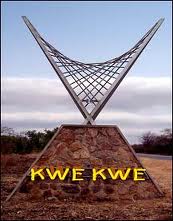 Kwekwe, known until 1983 as Que Que, is a city in the Midlands province of central Zimbabwe. The city has a population of 119,863 within the city limits, as of the 2022 census, making it the 7th-largest city in Zimbabwe and the second-most populous city in the Midlands, behind Gweru.

Pannawonica is an iron-ore mining town located in the Pilbara region of Western Australia, near the Robe River, about 200 km (120 mi) south-west from Karratha and 1,429 km (888 mi) North from Perth. At the 2016 census, Pannawonica had a population of 695.

Mintabie is an opal mining community in the Anangu Pitjantjatjara Yankunytjatjara in South Australia. It was unique in comparison to other communities situated in the APY Lands, in that its residents were largely not of Aboriginal Australian origin, and the land had been leased to the Government of South Australia for opal mining purposes since the 1980s.