Wilderness: Part One & Part Two (Japanese: あゝ、荒野, Hepburn: Aa, Koya, lit: "Ah, Wilderness") is a 2017 Japanese two-part drama film based on arthouse screenwriter Shūji Terayama's one and only full length novel, Aa Koya, published in 1966. Directed by Yoshiyuki Kishi, it stars Masaki Suda and Yang Ik-june. It made its world premiere in A Window on Asian Cinema at the 22nd Busan International Film Festival in 2017. [1]

Two "losers" meet by chance when they decide to join a rundown boxing gym by half-blind trainer Horiguchi (Yūsuke Santamaria). Ex-convict Shinji (Masaki Suda), whose father's suicide death impacts his mental health and outward aggressiveness, has just been released from a juvenile detention centre and is out to take revenge on Yuji Yamamoto (Yūki Yamada) who betrayed him and has since become a boxer. Kenji (Yang Ik-june), a mild-mannered half-Korean-half-Japanese barber, is extremely shy and stutters due to a traumatic past with his abusive father. They form an unlikely friendship as they journey their way to become professional boxers and a way back into an unforgiving society. [2] [3] [4]

D-Boys is a young male actors group affiliated with Watanabe Entertainment. The D in the group's name stands for "Drama", "Dream", "Debut", "Discovery" and "Development".

Weekly Young Sunday was a weekly manga magazine published by Shogakukan in Japan since the first issue on April 10, 1987. It replaced Shōnen Big Comic in Shogakukan's lineup of shōnen titles, and many of the titles in Shōnen Big Comic were continued in Young Sunday. The magazines was sometimes called Yansan (ヤンサン) for short.

Taishō Sugō, known professionally as Masaki Suda, is a Japanese actor and singer. He played Philip in Kamen Rider W. He won the Japan Academy Film Prize for Outstanding Performance by an Actor in a Leading Role. His debut song is "Mita Koto mo Nai Keshiki."

Wagaya no Rekishi is a Japanese three-part television mini-series, shown on Fuji TV from April 9, 2010 to April 11, 2010 to celebrate its 50th Anniversary. The show was known for its star-studded cast.

The Japan men's national volleyball team represents Japan in international volleyball competitions and friendly matches. Their nickname is "RYUJIN NIPPON ", "RYUJIN" means "God of Dragon" and "NIPPON" means "Japan". Japan won a bronze medal at the Tokyo 1964 Olympic Games, followed by silver at Mexico 1968 and a gold at Munich 1972. The years after this have been less successful. Japan missed three successive Olympic Games before returning at Beijing 2008, where they failed to win a match. Japan then failed to qualify for the London 2012 Olympic Games and also missed Rio 2016 after finishing seventh at the World Olympic Qualification Tournament in Tokyo. They also failed to qualify for the 2014 FIVB World Championship the first edition they had missed in 54 years. They had previously won FIVB World Championship bronze medals in 1970 and 1974. Japan silver medalists at the 1969 and 1977 World Cup. Japan has been less successful in the World League era. The team has won the Asian Championships nine times and the Asian Games eight times.

Noshiro Technical High School is a high school located in Noshiro, Akita, Japan. It was established in 1912. Noshiro Tech is best known for their powerhouse basketball and won Japanese high school championship 58 times. 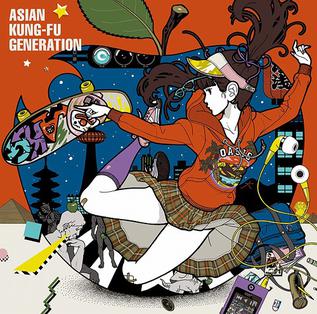 "Kōya o Aruke" is a song by Japanese rock band Asian Kung-Fu Generation. It was released on March 29, 2017 and was used as the theme song for the 2017 anime film, Night Is Short, Walk On Girl. Yūsuke Nakamura, the illustrator for all of the band's artwork, is also the person in charge of the original character design for the movie.