Wilhelm Gerhard Walpers (26 December 1816 in Mühlhausen – 18 June 1853 in Berlin) was a German botanist. This botanist is denoted by the author abbreviation Walp. when citing a botanical name. [1]

He received his education at the Universities of Greifswald and Breslau, earning his habilitation in 1848 at Berlin. He died on 18 June 1853 from a self-inflicted gunshot wound. [2]

The plant genus Walpersia (synonym Phyllota ) is named after him. [3] [4] 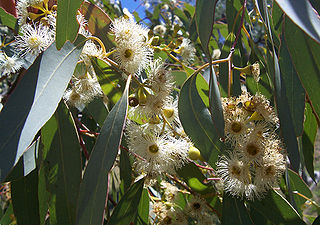 Eucalyptus melliodora, commonly known as yellow box, honey box or yellow ironbark, is a species of medium-sized to occasionally tall tree that is endemic to south-eastern, continental Australia. It has rough, flaky or fibrous bark on part or all of the trunk, smooth greyish to yellowish bark above. The adult leaves are lance-shaped to egg-shaped, the flower buds are arranged in groups of seven and the fruit is more or less hemispherical.

Eucalyptus miniata, commonly known as the Darwin woollybutt or woolewoorrng, is a species of medium-sized to tall tree that is endemic to northern Australia. It has rough, fibrous, brownish bark on the trunk, smooth greyish bark above. Adult leaves are lance-shaped, the flower buds are ribbed and arranged in groups of seven, the flowers orange or scarlet and the fruit is cylindrical to barrel-shaped or urn-shaped, with ribs along the sides.

Johannes Conrad Schauer was a botanist interested in Spermatophytes. He was born in Frankfurt am Main and attended the gymnasium of Mainz from 1825 to 1837. For the next three years he worked at the Hofgarten of Würzburg. Schauer then gained a position as assistant at the botanical garden at Bonn where he worked until 1832 when he was placed in charge of the botanic garden in Breslau, with C.G. Nees. He gained the degree of Doctor of Philosophy at the University of Erlangen-Nuremberg 1835 and was appointed professor of botany at the University of Greifswald from 1843 until his death in 1848.

Epidendrum paniculatum is a species of orchid in the genus Epidendrum.

Hofmeisteria is a genus of Mexican flowering plants in the sunflower family.

Solanecio is a genus of African plants in the groundsel tribe within the sunflower family.

Eucalyptus acmenoides, commonly known as white mahogany or barayly, is a tree that is endemic to eastern Australia. It is a large tree with grey to reddish brown, stringy bark, lance-shaped leaves, oval to spindle-shaped buds and more or less hemispherical fruits. The two sides of adult leaves are very different shades of green.

Heterorhachis is a genus of South African flowering plants in the daisy family.

Édouard Placide Duchassaing de Fontbressin was a French naturalist. He is noted for his work in botany and spongiology.

Eucalyptus dealbata, known as the tumbledown red gum or hill redgum, is a species of small tree that is endemic to eastern Australia. It has mostly smooth, white to grey or brownish bark, lance-shaped to egg-shaped adult leaves, flower buds in groups of between seven and eleven, white flowers and hemispherical fruit with the valves extended well beyond the rim of the fruit.

Corymbia clavigera, commonly known as apple gum or cabbage gum, is a species of tree that is endemic to a small area in the north-west Kimberley region of Western Australia. It has smooth, pale grey and white bark, lance-shaped or elliptical adult leaves, flower buds in groups of three or seven, white flowers and urn-shaped to barrel-shaped fruit. 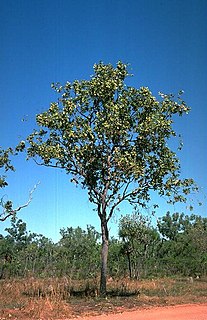 Corymbia ferruginea, commonly known as the rusty bloodwood, is a species of tree that is endemic to northern Australia. It has rough, tessellated bark on the trunk and branches, a crown of sessile juvenile leaves, flower buds in groups of three or seven, pale creamy yellow flowers and urn-shaped fruit. 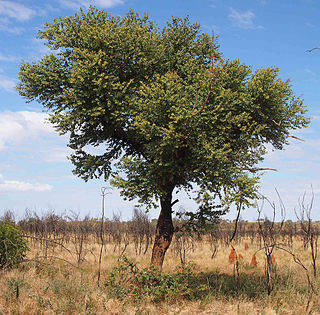 Corymbia setosa, commonly known as the rough leaved bloodwood or desert bloodwood, is a species of small tree that is endemic to north-eastern Australia. It has rough, tessellated brown bark on the trunk and branches, a crown of juvenile, heart-shaped leaves arranged in opposite pairs, flower buds in groups of three or seven, white flowers and urn-shaped to shortened spherical fruit.

Callisemaea elegans is a species of plants in the family Fabaceae. It is found in Mesoamerica.

Kunzea phylicoides, commonly known as the slender burgan, is a flowering plant in the myrtle family, Myrtaceae and is endemic to south-eastern Australia. It is an erect shrub with drooping branches, fibrous or corky bark, bright green, narrow leaves and clusters of white flowers in spring.

Leptospermum divaricatum is a species of plant that is endemic to inland New South Wales. It is an erect or weeping shrub with compact fibrous bark, elliptical to egg-shaped leaves, white flowers arranged singly on short axillary side shoots and woody fruit that fall off when mature.

Leptospermum speciosum is a species of shrub that is endemic to eastern Australia. It has pale bark that is shed in strips, broadly lance-shaped to elliptical leaves, white flowers arranged singly or in groups of up to three in leaf axils, and small, woody fruit that falls off when mature.

Teucrium junceum is a species of flowering plant in the family Lamiaceae, and is endemic to eastern Australia. It is a scrambling, openly-branched shrub, with small leaves, white flowers and orange to red fruit.

Chloanthes parviflora is a species of flowering plant in the family Lamiaceae. It is a small, rounded shrub with dark green, linear leaves and mauve tubular flowers. It grows in New South Wales and Queensland.