Mauser was born in Oberndorf am Neckar, in what was then the Kingdom of Württemberg. His father and his four brothers were gunsmiths. [1]

Together with his brother Paul Mauser (1838–1914) Wilhelm Mauser designed the Mauser Model 1871 rifle, the first of a successful line of Mauser rifles and pistols. The rifle was adopted as the Gewehr 71 or Infanterie-Gewehr 71 and was the first metal cartridge weapon of the German Empire. While Paul was the more technical of the two, Wilhelm handled this business side of the factory. [1]

The Mauser company later developed the Gewehr 98 and Karabiner 98k rifle series. The Gewehr 98 itself was the latest in a line of Mauser rifles that were introduced in 1898.

The Karabiner 98 kurz, often abbreviated Karabiner 98k, Kar98k or K98k and also incorrectly sometimes referred to as a K98, is a bolt-action rifle chambered for the 7.92×57mm Mauser cartridge. It was adopted on 21 June 1935 as the standard service rifle by the German Wehrmacht. It was one of the final developments in the long line of Mauser military rifles.

Mauser, originally Königliche Waffen Schmieden, is a German arms manufacturer. Their line of bolt-action rifles and semi-automatic pistols has been produced since the 1870s for the German armed forces. In the late 19th and early 20th centuries, Mauser designs were also exported and licensed to many countries which adopted them as military and civilian sporting firearms. The Mauser Model 98 in particular was widely adopted and copied, and is the foundation of many of today's sporting bolt action rifles.

The Gewehr 43 or Karabiner 43 is a 7.92×57mm Mauser caliber semi-automatic rifle developed by Germany during World War II. The design was based on that of the earlier G41(W), but incorporated an improved short-stroke piston gas system similar to that of the Soviet Tokarev SVT-40. It was manufactured using innovative mass-production techniques.

The Gewehr 41, commonly known as the G41(W) or G41(M), denoting the manufacturer, is a battle rifle manufactured and used by Nazi Germany during World War II. It was largely superseded by the Gewehr 43, which incorporated a more reliable method of operation.

The Gewehr 98 is a German bolt action rifle made by Mauser firing cartridges from a 5-round internal clip-loaded magazine. It was the German service rifle from 1898 to 1935, when it was replaced by the Karabiner 98k, a shorter weapon using the same basic design. The Gewehr 98 action, using a stripper clip loaded with the 7.92×57mm Mauser cartridge, successfully combined and improved several bolt action engineering concepts which were soon adopted by many other countries including the UK, Japan, and the US. The Gewehr 98 replaced the earlier Gewehr 1888 as the main German service rifle. It first saw combat in the Chinese Boxer Rebellion and was the main German infantry service rifle of World War I. The Gewehr 98 saw further military use by the Ottoman Empire and Nationalist Spain.

The vz. 24 rifle is a bolt-action carbine designed and produced in Czechoslovakia from 1924 to 1942. It was developed from the German Mauser Gewehr 98 line, and features a very similar bolt design. The rifle was designed in Czechoslovakia shortly after World War I, to replace the Vz. 98/22, also a Czech-designed derivative of the Gewehr 98. The vz. 24 featured a 590 mm (23.2 in) barrel which was shorter and considered more handy than the 740 mm (29.1 in) Gewehr 98 barrel. The vz. 24 was chambered in 7.92×57mm Mauser like its predecessors.

The Model 98a carbine was a Polish derivative of the German Gewehr 98 bolt-action rifle. 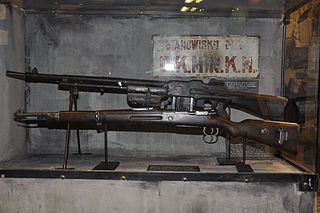 The Karabinek wz.29 was a Polish bolt-action short rifle based on the German Kar98AZ. Identifying attributes include a 98/05 style mast bayonet lug ending directly beneath the front sight and winged protective ears to either side of the front sight blade. Cavalry models featured a turned-down bolt handle, and early versions had a stacking hook near the end of the stock on the right side.

The Gewehr 88 was a late 19th-century German bolt action rifle, adopted in 1888.

The Mauser Model 1871 adopted as the Gewehr 71 or Infanterie-Gewehr 71, or "Infantry Rifle 71" was the first rifle model in a distinguished line designed and manufactured by Paul Mauser and Wilhelm Mauser of the Mauser company and later mass-produced at Spandau arsenal.

The puška vz. 33 was a Czechoslovak bolt-action carbine that was based on a Mauser-type action, designed and produced in Československá zbrojovka in Brno during the 1930s in order to replace the obsolete Mannlicher vz. 1895 carbines of the Czechoslovak četnictvo (gendarmerie). The manufacturer's designation was vz. 16/33. Another version, the Vz. 12/33, was also produced for the Latin American market.

The evolution of German military rifles is a history of common and diverse paths followed by the separate German states, until the mid-19th century when Prussia emerged as the dominant state within Germany and the nation was unified. This article discusses rifled shoulder arms developed in or for the military of the states that later became Germany; it excludes firearms of the Austrian Empire, except where they were used substantially by German troops. 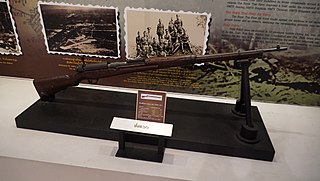 Facing the threat of Western colonial expansionism in Southeast Asia during the later part of the 19th century, King Rama V of Siam, sought new weapons as part of a modernization program to ensure the kingdom's independence. After experiments with other rifles, the Siamese military decided to purchase a Mauser rifle based on the Gewehr 98 design as their principle service rifle. Through various modifications, adaptations, and using various cartridges, the Siamese Mausers served as the main infantry weapon of Siam until after World War II. 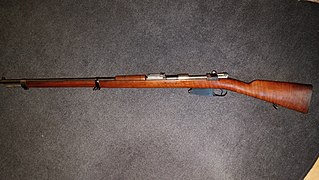 The Mauser Model 1889 is a bolt-action rifle of Belgian origin. It became known as the 1889 Belgian Mauser, 1891 Argentine Mauser, and 1890 Turkish Mauser.

The Mauser Model 1904 and Model 1907 were Gewehr 98 pattern bolt-action battle rifles produced by Mauser and Deutsche Waffen und Munitionsfabriken (DWM). They were designed for export market. Copies were later produced in China and in Spain.

The Standardmodell rifle is a bolt-action rifle chambered for the 7.92×57mm Mauser cartridge that was developed in 1924 but entered full-scale production in 1933. Officially designed for export and German security guards, it was used by the paramilitary Sturmabteilung (SA) and Schutzstaffel (SS). Export variants were used in South America, Ethiopia, China and Iberian Peninsula. The carbine version of this rifle was almost identical with the Karabiner 98k that became the standard German service rifle during World War II.

The Mauser Model 1903 was a Gewehr 98-pattern bolt-action rifle designed for the Ottoman Army. They were produced by Mauser in Germany.