Frederik Willem Zeylmans van Emmichoven, (Helmond, November 23, 1893 - Cape Town, November 18, 1961) was a Dutch psychiatrist and anthroposophist. From 1923 until his death in 1961 he was chairman of the Dutch Anthroposophical Society. He was a familiar figure in public life and had a considerable influence on the anthroposophic movement, particularly through his numerous lectures and his work as an author, which included the first biography of Rudolf Steiner.

Frederik Willem Zeylmans van Emmichoven was the son of a Dutch chocolate manufacturer. His mother came from Germany. [1] [2] [3] In childhood he was often troubled by visions of colour and emotional turmoil that later stimulated his preoccupation with colour. [3] After recovering from an attack of typhoid, he entered medical school at eighteen, specialising in psychiatry. His interest in colour, inspired by the painter Jacoba van Heemskerck and her friend and patron Marie Tak van Poortvliet, [4] led him to research the effects of colours on the life of feeling. He continued his medical studies in Leipzig under Wilhelm Wundt in 1919, where he became a member of the Anthroposophical Society. After meeting with Rudolf Steiner, the latter encouraged his further research into the effect of colours and his dissertation he wrote on The effect of colors on the feeling’’. [5] On 27 September 1921 he was married to Ingeborg Droogleever Fortuyn, whom he had met for the first time many years earlier. Their first son was born in 1926. . [6]

At the age of 28, Zeylmans began lecturing on Anthroposophy to an interested public and academic colleagues. He helped establish the first Waldorf School in The Hague, where he also founded a small psychiatric hospital, which soon moved into its own building (now the Rudolf Steiner Zorg). When the Anthroposophical Society was founded in the Netherlands, Rudolf Steiner appointed him as its first General Secretary. In addition to his psychiatric work Zeylmans undertook worldwide lecture tours. He spoke often about the effect of color on humans and gave advice to paint manufacturers, architects, directors of museums and artists. [3] [7]

Zeylman’s primary concerns were the rapprochement and understanding between the different nations and peoples themselves, as well as a furtherance of cosmopolitanism. His attempt to found the global schools association suggested by Rudolf Steiner (a '”Weltschulverein”), to promote the dissemination and free funding for free school education, failed due mainly to resistance from anthroposophic circles against fostering broader public awareness. In the face of increasing political fanaticism, another initiative Zeylmans took was to further interest for anthroposophy in European youth. In the summer of 1930 he organized a youth camp on the Stakenberg near Nunspeet in the Veluwe. More than a thousand participants gathered in working groups and heard lectures by leading anthroposophists like Eugen Kolisko, Walter Johannes Stein, Elisabeth Vreede and Ita Wegman on their thoughts to the situation of the time.

His work, however, was increasingly restricted by political developments. His involvement with the administration of the General Anthroposophical Society in Dornach Switzerland also met with increasing disapproval. The internal disputes since the death of Rudolf Steiner and his close collaboration with the physician Ita Wegman in 1935 led to his exclusion and that of the majority of the Dutch members.

After the war Zeylmans took up once again his international lecturing work. In 1954 he embarked on a global tour for nine months. Encouraged by Bernard Lievegoed, in 1960 he sought a mandate from the members of the Anthroposophical Society in the Netherlands to reunite it once more, after 25 years of separation, with the General Anthroposophical Society at the Goetheanum in Switzerland. He undertook a second journey through South Africa in 1961, visiting the newly established Waldorf schools and other institutions to give advice and hold lectures. During this trip, he died unexpectedly in Cape Town. [3]

A selection of Zeylman’s works in English.

Anthroposophy is a philosophy founded in the early 20th century by the esotericist Rudolf Steiner that postulates the existence of an objective, intellectually comprehensible spiritual world, accessible to human experience. Followers of anthroposophy aim to develop mental faculties of spiritual discovery through a mode of thought independent of sensory experience. They also aim to present their ideas in a manner verifiable by rational discourse and specifically seek a precision and clarity in studying the spiritual world mirroring that obtained by natural historians in investigations of the physical world.

Anthroposophic medicine is a form of alternative medicine. Devised in the 1920s by Rudolf Steiner (1861–1925) in conjunction with Ita Wegman (1876–1943), anthroposophical medicine is based on occult notions and draws on Steiner's spiritual philosophy, which he called anthroposophy. Practitioners employ a variety of treatment techniques based upon anthroposophic precepts, including massage, exercise, counselling, and substances. 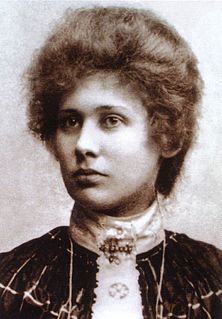 Ita Wegman co-founded Anthroposophical Medicine with Rudolf Steiner. In 1921, she founded the first anthroposophical medical clinic in Arlesheim, known until 2014 as the Ita Wegman Clinic. She also developed a special form of massage therapy, called rhythmical massage, and other self-claimed therapeutic treatments.

Eugen Kolisko was an Austrian-German physician and educator who was born in Vienna. He studied medicine at the University of Vienna, and in 1917 became a lecturer of medical chemistry. He was the son of pathologist Alexander Kolisko (1857-1918).

Max Leon Stibbe was a Dutch anthroposophist and educationist.

John Davy was a British journalist and science editor for The Observer, lecturer, vice-principal of Emerson College and Anthroposophist.

Liane Collot d’Herbois was a British painter and anthroposophical painting therapist. She researched light, darkness, colour and its application in painting and in therapy.

Joanna Maria Tak van Poortvliet was a Dutch art collector and the namesake for an art museum in Domburg.