Margrave William of Hachberg-Sausenberg (11 July 1406 - 15 August 1482) was the son of Margrave Rudolf III of Hachberg-Sausenberg and Anne of Freiburg-Neuchâtel. He ruled from 1428 to 1441, and abdicated on 21 June 1441 in favor of his infant sons, Rudolf IV and Hugo. As they were still infants, his cousin Count John of Freiburg-Neuchâtel took over the government as regent. [1]

John of Freiburg-Neuchâtel was a son of Conrad of Freiburg and his wife, Marie of Vergy. He succeeded his father as Count of Neuchâtel in 1421. He is, however, not in a hurry to pay homage to his father-in-law John III of Chalon-Arlay. In 1444, he joined the alliance of the Dauphin Louis and a number of Swiss cantons against the Habsburgs.

William married Elizabeth, daughter of the Count William VII of Montfort-Bregenz. His wife's relatives intervened because of his lavish lifestyle and he had to promise not to mortgage any assets from her dowry without their consent. Nevertheless, his lifestyle led to a divorce in 1436. They had at least three children: two sons, Rudolf IV and Hugo, who succeeded him, and a daughter, Ursula, who became the second wife of Count James Truchseß of Waldburg.

A dowry is a transfer of parental property, gifts, or money at the marriage of a daughter. Dowry contrasts with the related concepts of bride price and dower. While bride price or bride service is a payment by the groom or his family to the bride's parents, dowry is the wealth transferred from the bride's family to the groom or his family, ostensibly for the bride. Similarly, dower is the property settled on the bride herself, by the groom at the time of marriage, and which remains under her ownership and control. Dowry is an ancient custom, and its existence may well predate records of it. Dowries continue to be expected and demanded as a condition to accept a marriage proposal in some parts of the world, mainly in parts of Asia, Northern Africa and the Balkans. In some parts of the world, disputes related to dowry sometimes result in acts of violence against women, including killings and acid attacks. The custom of dowry is most common in cultures that are strongly patrilineal and that expect women to reside with or near their husband's family (patrilocality). Dowries have long histories in Europe, South Asia, Africa and other parts of the world.

As William was constantly in debt and the pressure of his creditors increased, he found eventually that he could only keep his ancestral lands in the family by abdicating in favour of his sons.

After his father had expanded Rötteln Castle, William dedicated himself to the expansion of Sausenburg Castle. 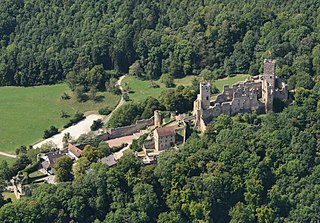 Rötteln Castle, located above the Lörrach suburb of Haagen, lies in the extreme southwest corner of the German state of Baden-Württemberg, just 10 kilometres north-east of the Swiss City of Basel. The fortification was one of the most powerful in the southwest, and today, it is the third largest castle ruin in Baden.

Sausenburg Castle is a ruined German castle on the edge of the Black Forest, just north of the town of Kandern in Baden-Württemberg, between the villages of Sitzenkirch and Malsburg-Marzell. The castle was originally the stronghold of the lords of Sausenburg, and is built on a hill, 665 metres high, known as the Sausenberg.

Expansion of the country's sovereignty

Efringen-Kirchen is a municipality in the district of Lörrach in Baden-Württemberg, Germany.

Eimeldingen is a town in the district of Lörrach, in Baden-Württemberg, Germany.

On 3 November 1437, Margrave William of Hachberg, in his capacity as bailiff, gave Cüne am Bühel rights to Waldshut, Guardian of the Abbess of Königsfelden Abbey, the third part of the grain tithe to Birkingen, the tithe to Eschbach and the wine tithe on Schönenbühel to Waldshut. He had boughts these rights from Albrecht Merler, who lived at Kadelburg. [2] It is not known when he bought these rights.

Via his cousin John of Freiburg-Neuchâtel, William gained access to the court of the Duke of Burgundy in Dijon. [3] During the Council of Basel, he was called upon as mediator between Austria and Burgundy and later as mediator between Burgundy and France. In 1432, the Protector of the Council, Duke William III of Bavaria appointed William of Hachberg as acting head. In 1434, Duke Philip III of Burgundy, appointed him as councillor and Chamberlain. [4]

Dijon is a city in eastern France, capital of the Côte-d'Or département in the Bourgogne-Franche-Comté region.

William III, was Duke of Bavaria-Munich (1397–1435), together and in concord with his older brother Ernest, Duke of Bavaria. William III was a son of John II and a member of the Parakeet Society.

In 1437, the Duke of Austria appointed him governor of the Austrian possessions in the Sundgau, Alsace and Freiburg. As governor of Further Austria, he was involved in the war between Emperor Frederick III and the Old Swiss Confederacy. After the Swiss defeated the Austrians in the Battle of St. Jakob an der Sihl in 1443, the Emperor sent William to King Charles VII of France to plea for help. France sent 40000mercenaries, the so-called Armagnacs. 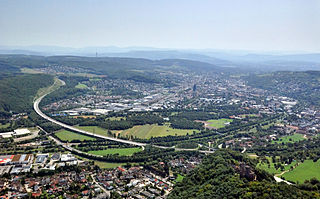 LörrachGerman pronunciation: [ˈlœrax] is a city in southwest Germany, in the valley of the Wiese, close to the French and the Swiss borders. It is the capital of the district of Lörrach in Baden-Württemberg. The largest industry is the Milka chocolate factory. The city had a population of 10,794 in 1905 and of 47,707 in 2007. 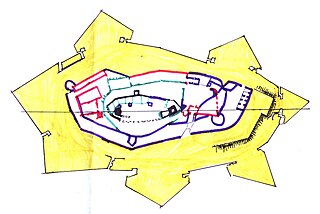 The Hochburg is a castle ruin situated between the city of Emmendingen and the village of Sexau in the region of Baden, located in the southwest of Germany. It was presumably built in the 11th century and was originally known as castle Hachberg. The line of nobles known as the Margraves of Baden-Hachberg most likely derive their name from this castle and before it was razed by the French it was the second largest fortification in Baden.

The Counts of Freiburg were the descendants of Count Egino of Urach, they ruled over the city of Freiburg and the Breisgau between approximately 1245 and 1368.

Margrave Philip I of Baden took over the administration of his father's possessions Baden (Baden-Baden), Durlach, Pforzheim and Altensteig and parts of Eberstein, Lahr and Mahlberg in 1515 and ruled as governor until he inherited the territories in 1527. From 1524 till 1527, he also acted as an imperial governor in the second Imperial Government.

Margrave Ernest I of Baden-Durlach was the founder of the so-called "Ernestine" line of the House of Baden, the line from which the later Grand Dukes descended. He was the ruling Margrave of Baden-Pforzheim from 1533 and resided in Pforzheim from 1537. In 1565, his son Charles II moved the capital to Durlach and thereby changed the name of his country to Baden-Durlach. He had to deal with the upcoming Reformation and the frequent Ottoman wars in Europe. In this turbulent time, he tried to maintain a neutral position between the Protestants and Catholics. He did not participate in the Schmalkaldic War.

Margrave James III of Baden-Hachberg was margrave of Baden-Hachberg from 1584 to 1590 and resided at Emmendingen. He converted, in 1590, from Lutheranism to the Roman Catholic confession, causing some political turmoil.

Margrave Rudolf II of Hachberg-Sausenberg(medieval: Rudolf II of Hachberg-Susenberg) (1301–1352) was the son of Margrave Rudolf I of Hachberg-Sausenberg and his wife Agnes, the heiress of Otto of Rötteln. After their elder brother Henry died in 1318, Rudolf II and his younger brother Otto I took up government in Rötteln and Sausenberg. They moved their seat of government from Sausenburg Castle to Rötteln Castle. In the fall of 1332, troops from the City of Basel besieged Rötteln Castle, because one of the brothers had stabbed the mayor of Basel. The conflict was settled after mediation by the nobility of the city and the margraviate.

Otto I, Margrave of Hachberg-Sausenberg (1302–1384) was a member of the House of Zähringen. He was the ruling Margrave of Rötteln and Sausenberg from 1318 until his death.

Margrave Rudolf I of Hachberg-Sausenberg (d.1313) was the son of Margrave Henry II of Hachberg and Anne of Üsenberg. He married in 1298 or 1299 to Agnes, the heiress of Otto of Rötteln. In 1306 he founded the side-line Hachberg-Sausenberg at Sausenburg Castle, a castle which the Margraves of Hachberg had built in 1240 on top of Mount Sausenberg. His elder brother Henry III continued the main Baden-Hachberg line at Hochburg castle in Emmendingen.

Henry, Margrave of Hachberg-Sausenberg (1300-1318) was the son of Margrave Rudolf I of Hachberg-Sausenberg and his wife Agnes, who was the daughter and heiress of Otto of Rötteln. In 1312, when he was still a minor, he inherited his father's possessions. After he came of age in 1315, his uncle Lüthold II of Röttlen gave him the Lordship of Rötteln. Lüthold II died in 1316. 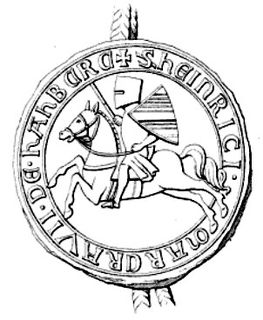 Rudolph III or Rudolf III may refer to:

The House of Hachberg-Sausenberg(medieval: House of Hachberg-Susenberg) was a German royal family that was first documented in 1306 as carve-out from the House of Baden-Hachberg, when Henry III. and his brother Rudolf I. shared the heritage of their father Henry II. The family maintained an own territory in Baden within the Holy Roman Empire of the German Nation from 1306 until 1503. The house was historically related to the royal House of Zähringen. 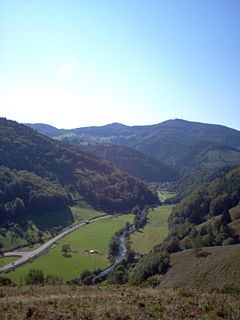 The Wiesental, named after the river Wiese, is a valley in the Southern Black Forest. The Wiese is a right-hand tributary of the Rhine which has its source in Feldberg and flows into the Rhine in Basel, Switzerland. The Wiesental was one of the first industrialized regions of the former grand dutchy of Baden and an important production location for the textile industry.