Brigadier-General Sir William Bromley-Davenport, KCB , CMG , CBE , DSO , TD , JP , DL (21 January 1862 – 6 February 1949) was a British soldier, footballer and Conservative politician. He fought with distinction in both the Second Boer War and the First World War. An MP from 1886 to 1906, he held political office under Arthur Balfour as Financial Secretary to the War Office from 1903 to 1905.

Bromley-Davenport was the son of William Bromley Davenport and his wife Augusta Elizabeth Campbell, daughter of Walter Campbell, of Islay. He was educated at Eton and Balliol College, Oxford. [1]

Bromley-Davenport played football for Oxford University and Old Etonians. He represented England on two occasions in March 1884, against Scotland and Wales respectively. A centre-forward, he scored two goals in the game against Wales. [2] [3]

Bromley-Davenport was elected Member of Parliament for Macclesfield in the July 1886 general election. [4] He was appointed a captain in the Staffordshire Yeomanry on 30 December 1891, and received the honorary rank of major on 28 February 1900. [5] While an MP, he fought in the Second Boer War with the Imperial Yeomanry, [1] where he was awarded the Distinguished Service Order (DSO) in November 1900. [6] At the end of 1901, he was appointed a Deputy Lieutenant of Cheshire. [7] He served in the Conservative administration of Arthur Balfour as Financial Secretary to the War Office from 1903 to 1905 and was a Civil Member of the Army Council from 1904 to 1905. [1] However, he lost his seat in the House of Commons in the 1906 Liberal landslide.

He still is patron of Poynton Show, a Horticultural and Agricultural show in Poynton, Cheshire, which still to this day takes place in the Saturday of the August Bank Holiday.

Major General Sir Henry Timson Lukin was a South African military commander. He fought in the Anglo-Zulu War (1879) and the Basutoland Gun War (1880–1881), the Bechuanaland Campaign (1897), and the Anglo-Boer War when he was in command of the artillery during the defence of Wepener for which action he was awarded a Distinguished Service Order. From 1900 to 1901 he commanded the Cape Mounted Riflemen, from 1904 to 1912 he was Commandant-General of the Cape Colonial Forces and in 1912 Inspector-General of the Permanent Force of the Union of South Africa. 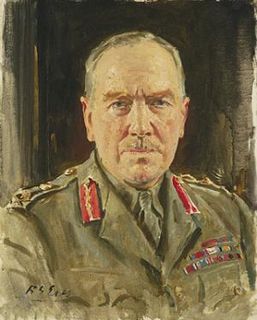 General Sir Robert Gordon-Finlayson was Adjutant-General to the Forces.

Brigadier General James Bruce Jardine was a British soldier and diplomat. He earned the rank of Brigadier-General in the service of the 5th Lancers.

Lieutenant General Sir Herbert Eversley Belfield, was a British Army officer who commanded the 4th Division from 1907 to 1911.

Lieutenant General Sir Charles Toler MacMorrough Kavanagh, was a British Army officer who commanded the Cavalry Corps at the Battle of Amiens.

Brigadier Sir Charles Loftus Bates was a British Army officer who served in the Second Boer War and the First World War. He was a cavalry officer in the 1st (King's) Dragoon Guards and the commanding officer of the Northumberland Hussars, part of the Yeomanry reserve.

Noel Ernest Money, was a brigadier-general in the British Army during the First World War.

Lieutenant-General Sir Edward Altham Altham, was a British Army officer who served in the Second Boer War and as a senior intelligence officer during World War I. He was Quartermaster-General in India 1917–1919.