William Cameron "Willie" McCool (September 23, 1961 – February 1, 2003) (Cmdr, USN) was an American naval officer and aviator, test pilot, aeronautical engineer, and NASA astronaut, who was the pilot of Space Shuttle Columbia mission STS-107. He and the rest of the crew of STS-107 were killed when Columbia disintegrated during reentry into the atmosphere. [1] [2] He was the crew's youngest male member. He was posthumously awarded the Congressional Space Medal of Honor.

McCool was born September 23, 1961, in San Diego, California. His parents divorced when he was young and his mother married Barent McCool, a Naval aviator. [3] McCool was active in the Boy Scouts of America where he became an Eagle Scout. [4] His favorite song was "Imagine" by John Lennon, which was played during the STS-107 mission. His favorite band was Radiohead, and the song "Fake Plastic Trees" was played by Mission Control as a wake-up call.

McCool died on February 1, 2003, when Space Shuttle Columbia broke up over the southern United States during reentry. He was survived by his wife, Lani, and their three sons. He is buried in Anacortes, Washington, where he lived at the time of his death. [2] [5]

McCool completed flight training and was designated a Naval Aviator in August 1986. He was assigned to Tactical Electronic Warfare Squadron 129 (VAQ-129) at NAS Whidbey Island, Washington, for initial EA-6B Prowler training. His first operational tour was with Tactical Electronic Warfare Squadron 133 (VAQ-133), where he made two deployments aboard the aircraft carrier USS Coral Sea to the Mediterranean Sea, and received designation as a wing-qualified Landing Signal Officer (LSO). In November 1989, he was selected for the U.S. Naval Postgraduate School/Test Pilot School (TPS) Cooperative Education Program. [1]

After graduating from TPS in June 1992, he worked as a TA-4J and EA-6B test pilot in Flight Systems Department of Strike Aircraft Test Directorate at NAS Patuxent River, Maryland. He was responsible for the management and conduct of a wide variety of projects, ranging from airframe fatigue life studies to numerous avionics upgrades. His primary efforts, however, were dedicated to flight test of the Advanced Capability (ADVCAP) EA-6B. Following his Patuxent River tour, McCool returned to Whidbey Island, and was assigned to Tactical Electronic Warfare Squadron 132 (VAQ-132) aboard the carrier USS Enterprise. He served as Administrative and Operations Officer with the squadron through their work-up cycle, receiving notice of his NASA selection while embarked on Enterprise for her final pre-deployment at sea period. [1]

McCool accumulated over 2,800 hours flight experience in 24 aircraft and over 400 carrier arrestments.

Selected by NASA in April 1996, McCool reported to the Johnson Space Center in August 1996. He completed two years of training and evaluation, and was qualified for flight assignment as a pilot. Initially assigned to the Computer Support Branch, McCool also served as technical assistant to the director of flight crew operations, and worked Shuttle cockpit upgrade issues for the Astronaut Office.

From our orbital vantage point, we observe an earth without borders, full of peace, beauty and magnificence, and we pray that humanity as a whole can imagine a borderless world as we see it and strive to live as one in peace. 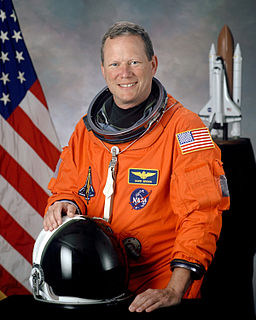 David McDowell Brown was a United States Navy captain and a NASA astronaut. He died on his first spaceflight, when the Space Shuttle Columbia (STS-107) disintegrated during orbital reentry into the Earth's atmosphere. Brown became an astronaut in 1996 but had not served on a space mission before the Columbia disaster. Brown was posthumously awarded the Congressional Space Medal of Honor. 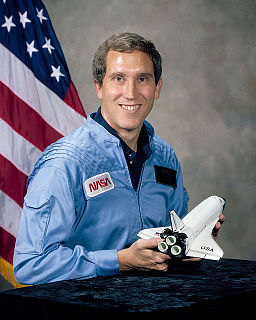 Michael John Smith, was an American engineer and astronaut. He served as the pilot of the Space Shuttle Challenger when it was destroyed during the STS-51-L mission, when it broke up 73 seconds into the flight, and at an altitude of 48,000 feet (14.6 km), killing all 7 crew members. Smith's voice was the last one heard on the Challenger voice recorder. 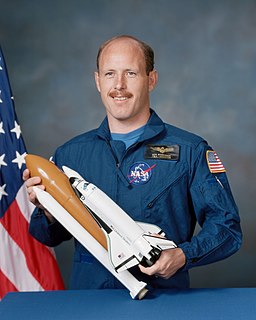 Kenneth Dwane "Sox" Bowersox is a United States Navy officer, and a former NASA astronaut. He is a veteran of five Space Shuttle launches and an extended stay aboard the International Space Station. When he launched on STS-73 at the age of 38 years and 11 months, he became the youngest person to command a Space Shuttle. 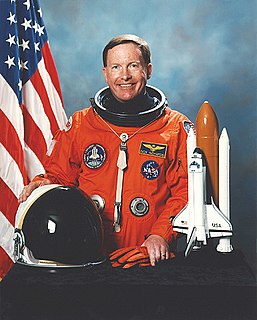 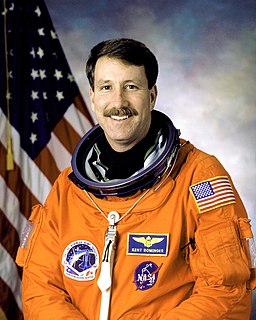 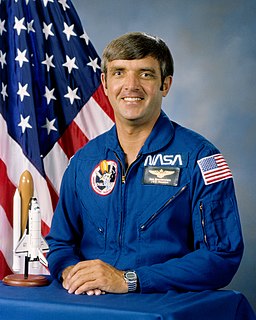 Robert Lee "Hoot" Gibson, , is a former American naval officer and aviator, test pilot, and aeronautical engineer. A retired NASA astronaut, he also served as Chief of the Astronaut Office from 1992 to 1994. Today Gibson is active as a professional pilot, racing regularly at the annual Reno Air Races. He was inducted into the U.S. Astronaut Hall of Fame in 2003 and the National Aviation Hall of Fame in 2013, and has received several military decorations throughout his career. 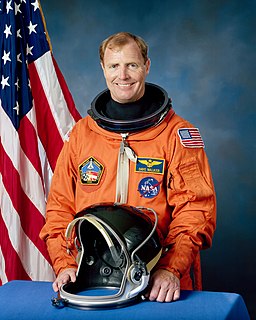 James Craig Adamson is a former NASA astronaut and retired Colonel of the United States Army. He is married with 3 children. James Adamson flew on two missions, STS-28 and STS-43, and completed 263 orbits and 334 hours in space. After retiring from NASA, he was recruited by Allied Signal where he retired in 2001. Adamson has logged over 3,000 hours in over 30 different types of helicopters and airplanes. 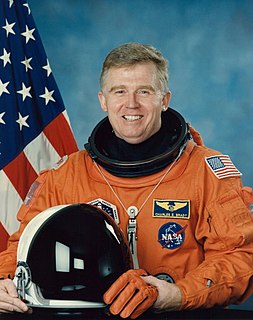 Charles Eldon Brady Jr. was an American physician, a captain in the United States Navy and a NASA astronaut. He spent 16 days in space on the Space Shuttle's STS-78 flight in 1996. 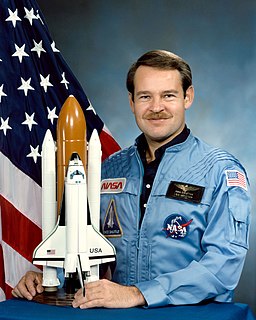 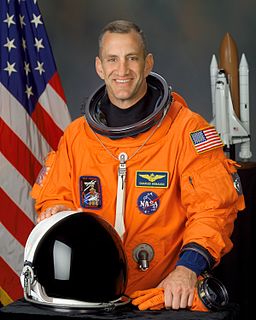 Charles Owen Hobaugh is a former NASA astronaut and a retired U.S. Marine Corps officer. He has had three spaceflights, all of which were Space Shuttle missions to the International Space Station, lasting between 10 and 13 days. 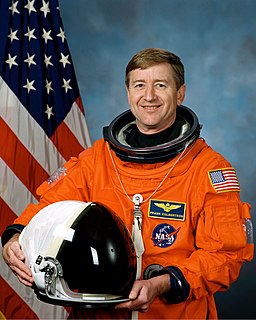 Frank Lee Culbertson Jr. is an American former naval officer and aviator, test pilot, aerospace engineer, NASA astronaut, graduate of the US Naval Academy, and member of the United States Astronaut Hall of Fame. He served as the Commander of the International Space Station for almost four months in 2001 and was the only U.S. citizen not on Earth when the September 11 attacks occurred. 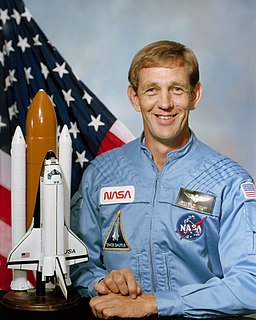 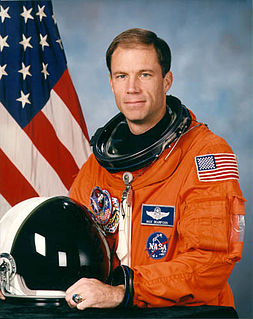 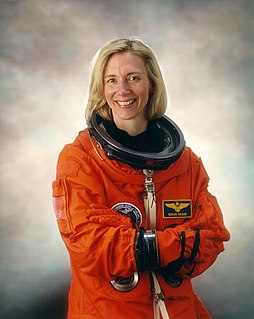 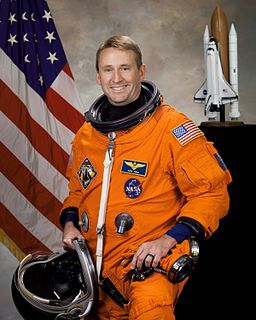 Kenneth Todd "Hock" Ham is a retired American astronaut and a captain in the United States Navy. Ham was selected for NASA's astronaut program in August 1998, while serving as the F/A-18E/F Super Hornet lead carrier suitability test pilot. Ham's aviator call sign is "Hock". As of July 2013, Captain Ham served as the Chair of the Aerospace Engineering Department at the United States Naval Academy, in Annapolis, Maryland. Captain Ham has worked for Bigelow Aerospace in North Las Vegas as of August 2014. 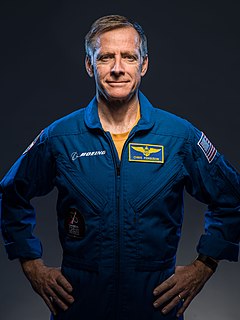 Christopher J. "Fergy" Ferguson is a Boeing commercial astronaut and a retired United States Navy Captain and NASA astronaut. He was the pilot of Space Shuttle Atlantis on his first mission to space, STS-115, which launched on September 9, 2006 and returned to Earth on September 21, 2006. He then commanded STS-126 aboard Space ShuttleEndeavour. In 2011, he was assigned as commander of STS-135, which was the final mission of the space shuttle program. 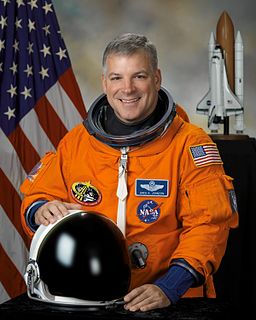 Gregory Harold "Box" Johnson is a former NASA astronaut and a retired colonel in the United States Air Force. Johnson is a veteran of two space flights, STS-123 and STS-134. He served as pilot on his first mission, which delivered the Kibo logistics module and the Dextre robot arm to the International Space Station. Johnson was also assigned as the pilot to the STS-134 mission, which launched on May 16, 2011, and landed on June 1, 2011. Greg Johnson has also served in numerous roles for NASA including as a Capcom for several missions. Gregory H. Johnson was the President and executive director for the Center for the Advancement of Science in Space (CASIS) until March 10, 2018. He is now working with Lockheed Martin. 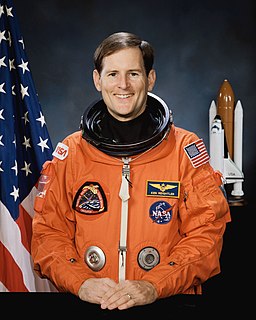 Wikimedia Commons has media related to William Cameron McCool .
This page is based on this Wikipedia article
Text is available under the CC BY-SA 4.0 license; additional terms may apply.
Images, videos and audio are available under their respective licenses.