William Chester Minor, also known as W. C. Minor (June 22, 1834 – March 26, 1920) was an American army surgeon and one of the largest contributors of quotations to the Oxford English Dictionary . [1] He was also held in a psychiatric hospital from 1872 to 1910 after he murdered George Merrett.

Minor was born on the island of Ceylon (now Sri Lanka), the son of Eastman Strong Minor, and his first wife Lucy Bailey, Congregationalist Church missionaries from New England. He had numerous half-siblings, among them Thomas T. Minor, mayor of Seattle, Washington. [2] At 14 he was sent to the United States, where he lived with relatives in New Haven while attending the Russell Military Academy. He subsequently enrolled in Yale Medical School, supporting himself during his years as a medical student with part-time employment as an instructor at the Russell academy and as an assistant on the 1864 revision of Webster's dictionary, [3] then in preparation at Yale under the supervision of Noah Porter. Minor graduated in 1863 with a medical degree and a specialization in comparative anatomy. After a brief stint at Knight General Hospital in New Haven he joined the Union army.

He was accepted by the Union army as a surgeon and may have served at the Battle of the Wilderness in May 1864, which was notable for the terrible casualties suffered by both sides. There is an unverified story of Minor also being given the task of punishing an Irish soldier in the Union Army by branding him on the face with a D for "deserter" [4] and that this incident later played a role in Minor's delusions. [4]

There is disagreement whether the Union army used branding as a punishment for desertion. [5] [6] This means that the story that Minor branded a deserter may be apocryphal. Moreover, it is unlikely Minor was present at the Battle of the Wilderness, May 5–7, 1864. Minor's military records place him at Knight USA Hospital in New Haven and do not show him arriving at 2 Division Hospital USA at Alexandria, VA, until May 17, 1864. [7]

After the end of the U.S. Civil War, Minor saw duty in New York City. He was strongly attracted to the red-light district of the city and devoted much of his off-duty time to going with prostitutes. By 1867, his behavior had come to the attention of the Army and he was transferred to a remote post in the Florida Panhandle. By 1868, his condition had progressed to the point that he was admitted to St. Elizabeths Hospital, a lunatic asylum (as mental hospitals were then called) in Washington, D.C. After eighteen months he showed no improvement.

Move to England and conviction for murder

In 1871 he went to London for a change of place to help his mental condition, settling in the slum of Lambeth, where once again he took up a dissolute life. Haunted by his paranoia, he fatally shot a man named George Merrett, who Minor believed had broken into his room, on February 17, 1872. Merrett had been on his way to work to support his family of six children, himself, and his pregnant wife, Eliza. After a pre-trial period spent in London's Horsemonger Lane Gaol, Minor was found not guilty by reason of insanity and incarcerated in the asylum at Broadmoor in the village of Crowthorne, Berkshire. As he had his US army pension and was not judged dangerous, he was given rather comfortable quarters and was able to buy and read books. [8] [9]

It was probably through his correspondence with the London booksellers that he heard of the call for volunteers for what was to become the Oxford English Dictionary (OED). He devoted most of the remainder of his life to that work. [10] He became one of the project's most effective volunteers, reading through his large personal library of antiquarian books and compiling quotations that illustrated the way particular words were used. He was often visited by the widow of the man he had killed, and she provided him with further books. The compilers of the dictionary published lists of words for which they wanted examples of usage. Minor provided these, with increasing ease as the lists grew. It was many years before the OED's editor, Dr. James Murray, learned Minor's background history, and visited him in January 1891. In 1899 Murray paid compliment to Minor's enormous contributions to the dictionary, stating, "we could easily illustrate the last four centuries from his quotations alone." [11] [12]

Minor's condition deteriorated and in 1902, due to delusions that he was being abducted nightly from his rooms and conveyed to places as far away as Istanbul, and forced to commit sexual assaults on children, he cut off his own penis (autopenectomy) using a knife he had employed in his work on the dictionary. [13] His health continued to worsen, and after Murray campaigned on his behalf, Minor was released in 1910 on the orders of Home Secretary Winston Churchill. [13] He was deported back to the United States and resided at St. Elizabeths Hospital where he was diagnosed with schizophrenia. He died in 1920 in Hartford, Connecticut, after being moved in 1919 to the Retreat for the Elderly Insane there. [14]

The book The Surgeon of Crowthorne (published in America as The Professor and the Madman), by Simon Winchester, was published in 1998 and chronicles both Minor's later life and his contributions to the creation of the Oxford English Dictionary . The movie rights for the book were bought by Mel Gibson's Icon Productions in 1998. [15] In August 2016 it was announced that Farhad Safinia was to direct an adaptation, called The Professor and the Madman , starring Gibson as Murray and Sean Penn as Minor. [16] The film was released in May 2019.

Minor's life was also detailed in an episode of Drunk History . He was portrayed by Bob Odenkirk.

The Surgeon of Crowthorne: A Tale of Murder, Madness and the Love of Words is a book by Simon Winchester that was first published in England in 1998. It was retitled The Professor and the Madman: A Tale of Murder, Insanity, and the Making of the Oxford English Dictionary in the United States and Canada. 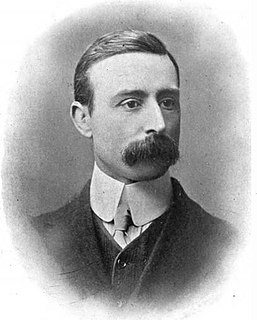 Harold James Ruthven Murray was an English educationalist, inspector of schools, and prominent chess historian. His book, A History of Chess, is widely regarded as the most authoritative and most comprehensive history of the game. 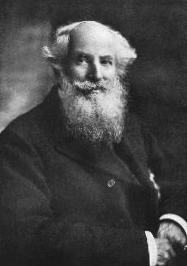 Frederick James Furnivall, one of the co-creators of the New English Dictionary, was an English philologist. He founded a number of learned societies on early English literature and made pioneering and massive editorial contributions to the subject, of which the most notable was his parallel text edition of The Canterbury Tales. He was one of the founders of and teachers at the London Working Men's College and a lifelong campaigner against injustice.

Charles Talbut Onions was an English grammarian and lexicographer and the fourth editor of the Oxford English Dictionary.

Henry Bradley, FBA was a British philologist and lexicographer who succeeded James Murray as senior editor of the Oxford English Dictionary (OED).

Simon Winchester, is a British-American author and journalist. In his career at The Guardian newspaper, Winchester covered numerous significant events, including Bloody Sunday and the Watergate Scandal. Winchester has written or contributed to more than a dozen nonfiction books, has written one novel, and has contributed to several travel magazines, among them Condé Nast Traveler, Smithsonian Magazine, and National Geographic. He lives in Berkshire County, Massachusetts. 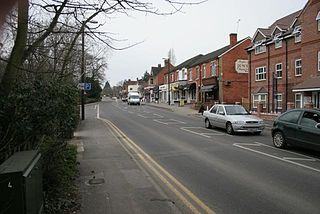 Crowthorne is a village and civil parish in the Bracknell Forest district of south-eastern Berkshire. It had a population of 6,711 at the 2001 census, increasing to 6,902 at the 2011 Census. Crowthorne is best known for Wellington College, a large co-educational boarding and day independent school, which opened in 1859, and for Broadmoor Hospital, one of three maximum security psychiatric hospitals in England, which lies on the eastern periphery of the village.

Fitzedward Hall was an American Orientalist, and philologist. He was the first American to edit a Sanskrit text, and was an early collaborator in the Oxford English Dictionary (OED) project. 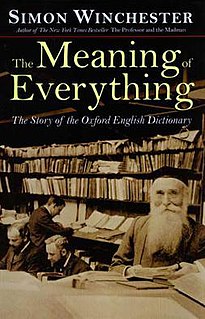 The Meaning of Everything is a 2003 book by Simon Winchester. It concerns the creation of the Oxford English Dictionary under the editorship of James Murray and others, one aspect of which Winchester had previously written about in The Surgeon of Crowthorne.

Thomas T. Minor was a physician, businessman, civic and political leader who founded the Seattle, Lake Shore and Eastern Railway and served as mayor of Seattle and Port Townsend, Washington.

Meanderings of Memory is a rare book published in London in 1852 and attributed to Nightlark. Although it is cited as a first or early source for over 50 entries in the Oxford English Dictionary (OED), the current OED editors have been unable to locate a surviving copy. OED editors made their search for the elusive source public in May 2013.

Thomas Nadauld Brushfield (1828–1910) was an English alienist and antiquarian.

The Professor and the Madman is a 2019 biographical drama film, directed by Farhad Safinia, from a screenplay by Safinia, and Todd Komarnicki, based on the 1998 book The Surgeon of Crowthorne by Simon Winchester. It stars Mel Gibson, Sean Penn, Natalie Dormer, Eddie Marsan, Jennifer Ehle, Jeremy Irvine, David O'Hara, Ioan Gruffudd, Stephen Dillane, and Steve Coogan.

Green's Dictionary of Slang (GDoS) is a multivolume dictionary defining and giving the history of English slang from around the Early Modern English period to the present day written by Jonathon Green. As a historical dictionary it covers not only slang words in use in the present day but also those from the past which are no longer used, and illustrates its definitions with quotations. It is thus comparable in method to the Oxford English Dictionary (OED) though with a narrower scope, since it includes only slang words; nonetheless it is more comprehensive within its scope, containing 125,000 items of slang while the OED has only 7,700 terms carrying a slang label.