He was son of the Rev. Michael John Mayers, and was born on 7 January 1831 in Tasmania. At the time his father was colonial chaplain there, and was subsequently appointed consular chaplain at Marseille, where Mayers received most of his schooling. [2]

After spending some years as a journalist in New York, Mayers in 1859 went to China as a student-interpreter, accompanying Lord Elgin to Beijing. and, after serving as interpreter to the allied commission charged with the government of Canton, was appointed interpreter to the consulate there. [2] He encountered Gustaaf Schlegel there in 1861. [3] In 1864 he was at Shanghai, assisting with Harry Smith Parkes the Bakufu officials Moriyama Takichirō and Yamaguchi Shichijirō. [4]

Mayers filled consular posts at Chinese ports until 1872, when he was made Chinese secretary of legation at Pekin. In the same year he visited England, and in August read a paper on the Pathays of Yünan before the geographical section of the British Association at Brighton. [2]

Mayers in 1861 became fellow of the Royal Geographical Society; he was also a member of the Royal Asiatic Society, He died on 24 March 1878 at Shanghai of typhus fever, and was survived by his wife. [1] [2]

Mayers was a noted Chinese scholar. He wrote: [2]

He collaborated with Henry Fletcher Hance, as sinologist and botanist. [5]

In 1867, with Nicholas Belfield Dennys and Lieutenant Charles King, Mayers wrote The Treaty Ports of China, and in 1877 translated the Peking Gazette for that year. His official report on The Famine in the Northern Provinces of China was published as a parliamentary paper. He was a contributor to periodical publications, especially the China Review, published at Shanghai, He published in 1869 in the Journal of the Royal Asiatic Society a paper on the Lamaist Septem in Tibet. [2]

Sir Harry Smith Parkes was a British diplomat who served as Envoy Extraordinary and Minister Plenipotentiary and Consul General of the United Kingdom to the Empire of Japan from 1865 to 1883 and the Chinese Qing Empire from 1883 to 1885, and Minister to Korea in 1884. Parkes Street in Kowloon, Hong Kong, is named after him.

Sir Edward Shepherd Creasy was an English historian and jurist.

The Royal Asiatic Society of Great Britain and Ireland, commonly known as the Royal Asiatic Society (RAS), was established, according to its royal charter of 11 August 1824, to further "the investigation of subjects connected with and for the encouragement of science, literature and the arts in relation to Asia." From its incorporation the society has been a forum, through lectures, its journal, and other publications, for scholarship relating to Asian culture and society of the highest level. It is the United Kingdom's senior learned society in the field of Asian studies. Fellows of the society are elected regularly. Fellows include highly accomplished and notable scholars of Asian studies. They use the post-nominal letters FRAS.

Sir James Emerson Tennent, 1st Baronet FRS, born James Emerson, was a British politician and traveller born in Ireland. He was elected a Fellow of the Royal Society on 5 June 1862.

Samuel Beal was an Oriental scholar, and the first Englishman to translate directly from the Chinese the early records of Buddhism, thus illuminating Indian history.

Britain had a functioning consular service in Japan from 1859 after the signing of the 1858 Anglo-Japanese Treaty of Amity and Commerce between James Bruce, 8th Earl of Elgin and the Tokugawa Shogunate until 1941 when Japan invaded British colonial empire and declared war on the United Kingdom.

George Frederick Hose was an Anglican clergyman, Bishop of Labuan and Sarawak from 1881 to 1909.

Frederic Charles Danvers (1833–1906), often Frederick, was a British civil servant and writer on engineering. The Superintendent of the India Office Records between 1884 and 1898, he was also a historian and wrote works on India. 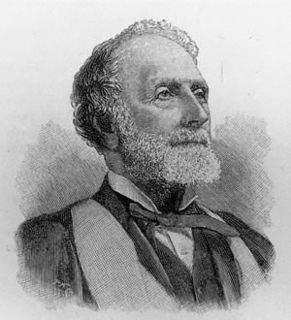 Sir Thomas Francis Wade, was a British diplomat and sinologist who produced an early Chinese textbook in English, in 1867, that was later amended, extended and converted into the Wade-Giles romanization system for Mandarin Chinese by Herbert Giles in 1892. He was the first professor of Chinese at Cambridge University.

Edmund Venables was an English cleric and antiquarian.

The Revd Dr James Booth, (1806–1878) was an Anglo-Irish clergyman, notable as a mathematician and educationalist.

Richard Moore (1810–1878) was an English radical politician. He was a moderate Chartist, and heavily involved in the campaign against "taxes on knowledge".

Thomas Jones (1819–1882) was a Welsh Independent minister, known as "the Welsh Poet-Preacher". As a popular preacher he has been compared with William Williams of Wern (1781–1840). His reputation was made, however, by his sermons in English at Bedford Chapel in north London, in a less popular style.

Arthur Gray Butler (1831–1909) was an English academic and cleric, the first headmaster of Haileybury College.