Sullivan was born in Cranston,Rhode Island,and graduated from Brown University as salutatorian and Class Orator of the class of 1943. His senior address was on America's duty to "aid in repairing not only the damage suffered by our Allies,but also that sustained by our enemies." [2] After graduation,he entered the Navy and served as a gunnery officer on a destroyer,the USS Hambleton . The Hambleton escorted North Atlantic convoys,and served off North Africa and Italy before participating in the D-Day invasion of Normandy and the invasion of Okinawa. He had the senior watch on the Hambleton when it entered Yokohama harbor for the Japanese surrender. [3]

After obtaining a joint graduate degree from Harvard University and the Fletcher School at Tufts University under the GI Bill,Sullivan joined the Foreign Service and was posted to Bangkok,Thailand. During that tour,he was in brief communication with the Viet Cong,who were in exile in northern Thailand. His subsequent assignments were to Calcutta,India,Tokyo,Japan,Naples and Rome,Italy,and The Hague,Netherlands.

His habit of speaking his mind with force and candor grated on more than one superior,and for years he languished in the lower grades. Then,in the Kennedy administration,he was assigned to the office of W. Averell Harriman,the Assistant Secretary for the Far East. Harriman,no admirer of blandness,immediately recognized his abilities. [4]

Sullivan served as Harriman's deputy at Geneva negotiations about the future of Laos in 1961 and during the Cuban Missile Crisis. [5] When the Vietnam War heated up,he served briefly as deputy chief of mission to the U.S. Embassy in Saigon. [6]

In 1964,Sullivan began his tenure as Ambassador to Laos. During his service in Laos,Sullivan broached negotiations with the North Vietnamese,capitalizing on his prior contacts with the Viet Cong in Thailand nearly 20 years previously,for the initiation of the Paris Peace Talks that ended the U.S. involvement in the Vietnam War. [7] Pursuant to an order by President Kennedy,all U.S. military operations in Laos were under the direct supervision of the Ambassador. [8] As Ambassador to Laos during Project 404,and he also personally directed the bombing of the Ho Chi Minh trail. This civilian control and the restriction on military operations rankled the military. [1]

After he left Laos,Sullivan returned to Washington to coordinate the U.S. participation in the Paris Peace Talks. [9] Thereafter,he was appointed Ambassador to the Philippines. South Vietnam fell while he in the Philippines,and Sullivan orchestrated the evacuation of hundreds of thousands of people through that nation. He was able to convince President Marcos to permit the fleeing South Vietnamese navy to land,despite a demand from the new Communist Vietnamese government for its return,by arguing that the ships were in fact U.S. property after the fall of the South Vietnamese government,as a result of the terms of their sale to that state. [10]

Sullivan next served as U.S. Ambassador to Iran, arriving just before President Jimmy Carter's visit to the Shah of Iran in December 1977. In the 1970s, America had extremely close military and economic links with Iran.

As demonstrations increased in scale, Sullivan came into conflict with National Security Advisor Zbigniew Brzezinski over a resolution that would be acceptable to American interests. Sullivan felt that compromise with the demonstrators and the Ayatollah Khomeini was necessary, while Brzezinski favored strong, unconditional support for the Shah and Iranian Prime Minister Shapour Bakhtiar. Although Brzezinski got his way, the demonstrators prevailed; in late 1978, Sullivan cabled Washington that it might be necessary to consider policy options if the military proved unable to assure the shah's continuance in power and the shah should depart from Iran. [11] In January 1979, the White House instructed Sullivan to inform the shah that the U.S. government felt he should leave the country. [12]

On February 1, 1979, the exiled Khomeini returned to Tehran. Days later, with Tehran in revolution and all organs of state essentially nonexistent, Under Secretary of State David D. Newsom called from the White House Situation Room with a question for Sullivan: "The National Security Advisor (Brzezinski) has asked for your view of the possibility of a coup d'état by the Iranian military to take over from the Bakhtiar government, which is clearly faltering."

"You want it translated into Polish?" Sullivan hung up. [13]

On February 14, 1979, the US Embassy in Teheran was overrun by several different armed groups. [14] The Embassy staff was briefly taken hostage, but later released to the caretaker Iranian government. This crisis, which predated the larger Iran Hostage Crisis by nine months, became sarcastically known as the "St. Valentine's Day Open House" owing to the date on which it occurred. [15]

He wrote in his autobiography: "I had recommended that we accept the fact that a revolution was in progress and seek to use our not inconsiderable influence to steer its success toward its more moderate protagonists." This view, however, was not shared by Washington, and Sullivan was recalled in March 1979. Shortly after, on April 1, 1979, Iran officially became an Islamic Republic.

After Sullivan left Iran, the Embassy drew down to a skeleton staff, under the direction of Chargé d'Affaires Bruce Laingen, who later became one of 52 Americans held hostage by militant Iranian students.

He headed the American Assembly at Columbia University, which had been briefly headed by General Dwight Eisenhower before he was elected President, from 1979 to 1986. In 1981, Sullivan published Mission to Iran, a memoir of his time as ambassador. His autobiography, Obbligato: Notes on a Foreign Service Career, was published in 1984. [16]

He later served on the boards of the Lincoln Center, the International Center, and the U.S.- Vietnam Trade Council.

In 1988 he received an overture to begin steps towards U.S.-Vietnam normalization from his former North Vietnamese negotiations counterpart Nguyen Co Thach, who had become Vietnam's Deputy Prime Minister and Foreign Minister. Sullivan first traveled back to Vietnam in May 1989 to meet with Minister Thach, founded the U.S.-Vietnam Trade Council, and from then continued to work on steps towards the historic normalization.

Zbigniew Kazimierz Brzezinski was a Polish-American diplomat and political scientist. He served as a counselor to President Lyndon B. Johnson from 1966 to 1968 and was President Jimmy Carter's National Security Advisor from 1977 to 1981. As a scholar, Brzezinski belonged to the realist school of international relations, standing in the geopolitical tradition of Halford Mackinder and Nicholas J. Spykman. Brzezinski was the primary organizer of The Trilateral Commission.

Richard McGarrah Helms was an American government official and diplomat who served as Director of Central Intelligence (DCI) from 1966 to 1973. Helms began intelligence work with the Office of Strategic Services during World War II. Following the 1947 creation of the Central Intelligence Agency (CIA) he rose in its ranks during the presidencies of Truman, Eisenhower and Kennedy. Helms then was DCI under Presidents Johnson and Nixon. 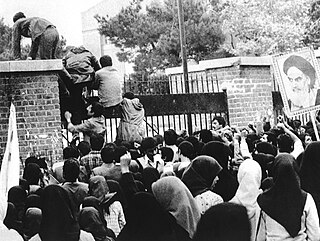 On November 4, 1979, 52 United States diplomats and citizens were held hostage after a group of militarized Iranian college students belonging to the Muslim Student Followers of the Imam's Line, who supported the Iranian Revolution, took over the U.S. Embassy in Tehran and seized hostages. A diplomatic standoff ensued. The hostages were held for 444 days, being released on January 20, 1981. 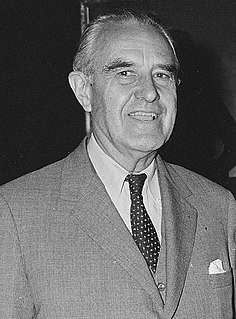 William Averell Harriman, better known as Averell Harriman, was an American Democratic politician, businessman, and diplomat. The son of railroad baron E. H. Harriman, he served as Secretary of Commerce under President Harry S. Truman, and later as the 48th Governor of New York. He was a candidate for the Democratic presidential nomination in 1952 and 1956, as well as a core member of the group of foreign policy elders known as "The Wise Men". 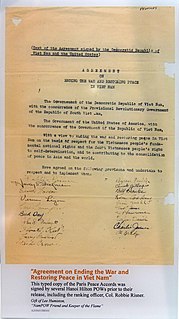 The Paris Peace Accords, officially titled the Agreement on Ending the War and Restoring Peace in Viet Nam, was a peace treaty signed on January 27, 1973, to establish peace in Vietnam and end the Vietnam War. The treaty included the governments of the Democratic Republic of Vietnam, the Republic of Vietnam, and the United States, as well as the Republic of South Vietnam (PRG) that represented South Vietnamese communists. US ground forces up to that point had been sidelined with deteriorating morale and gradually withdrawn to coastal regions, not taking part in offensive operations or much direct combat for the preceding two-year period. The Paris Agreement Treaty would in effect remove all remaining US Forces, including air and naval forces in exchange. Direct U.S. military intervention was ended, and fighting between the three remaining powers temporarily stopped for less than a day. The agreement was not ratified by the United States Senate.

Ebrahim Yazdi was an Iranian politician, pharmacist, and diplomat who served as deputy prime minister and minister of foreign affairs in the interim government of Mehdi Bazargan, until his resignation in November 1979, in protest at the Iran hostage crisis. From 1995 until 2017, he headed the Freedom Movement of Iran. Yazdi was also a trained cancer researcher. 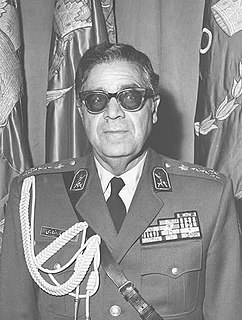 Arteshbod Gholam Reza Azhari was a military leader and Prime Minister of Iran.

Lowell Bruce Laingen was an American diplomat who served as the United States Ambassador to Malta from 1977 to 1979. Laingen is best known for having been the most senior American official held hostage during the Iran hostage crisis, while serving as the chargé d'affaires at the U.S. Embassy in Tehran.

CIA activities in Laos started in the 1950s. In 1959, U.S. Special Operations Forces began to train some Laotian soldiers in unconventional warfare techniques as early as the fall of 1959 under the code name "Erawan". Under this code name, General Vang Pao, who served the royal Lao family, recruited and trained his Hmong soldiers. The Hmong were targeted as allies after President John F. Kennedy, who refused to send more American soldiers to battle in Southeast Asia, took office. Instead, he called the CIA to use its tribal forces in Laos and "make every possible effort to launch guerrilla operations in North Vietnam with its Asian recruits." General Vang Pao then recruited and trained his Hmong soldiers to ally with the CIA and fight against North Vietnam. The CIA itself claims that the CIA air operations in Laos from 1955-1974 were the "largest paramilitary operations ever undertaken by the CIA."

Arteshbod Abbas Gharabaghi was the last chief of staff of the Iranian armed forces as well as deputy commander-in-chief of the Iranian Imperial Army during the rule of Mohammad Reza Pahlavi, the last Shah of Iran. Gharabaghi was one of two senior military officials who were not detained and executed by the Islamic Revolutionary Council.

The Former Embassy of Iran in Washington, D.C. was the Imperial State of Iran's diplomatic mission to the United States. Direct bilateral Iran–United States relations between the two governments were severed following the Iranian Revolution in 1979, and the subsequent seizure of hostages at the U.S. Embassy in Tehran, Iran. 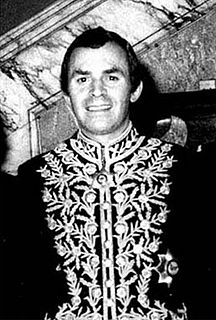 Parviz Camran Radji was an Iranian diplomat and the last ambassador in London, under Shah Mohammad Reza Pahlavi.

Ahmad Mirfendereski was an Iranian diplomat, politician and the last minister of foreign affairs of the Shah era in Iran.

Kenneth L. Kraus is a former United States Marine who was the first American taken hostage by Iranian militants prior to the Iran hostage crisis.

This is a timeline of the Iran hostage crisis (1979–1981), starting from the Shah Mohammed Reza Pahlavi's leaving of Iran and return of all hostages to the United States. 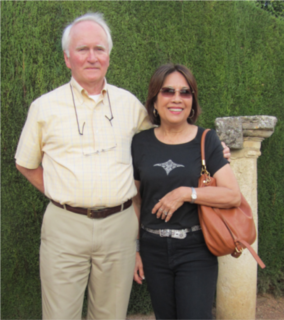 Victor L. Tomseth is a former American diplomat and U.S. Ambassador (1993–1996) to Laos. He was Deputy Chief of Mission in Tehran, Iran and was among the Americans taken hostage by the Iranians from 1979 to 1981.

In 2016, the BBC published a report which stated that the administration of United States President Jimmy Carter (1977–1981) had extensive contact with Ayatollah Ruhollah Khomeini and his entourage in the prelude to the Iranian Revolution of 1979. The report was based on "newly declassified US diplomatic cables". According to the report, as mentioned by The Guardian, Khomeini "went to great lengths to ensure the Americans would not jeopardise his plans to return to Iran - and even personally wrote to US officials". According to the report, in turn, Carter and his administration helped Khomeini and made sure that the Imperial Iranian army would not launch a military coup.