Henderson was born in 1819 at Harbridge, Hampshire. [3] He was the son of Vice-Admiral George Henderson; a brother was Sir Edmund Henderson. He attended Magdalen College, Oxford. [4]

Henderson was a Fellow of Magdalen College, Oxford, his alma mater [5] and a Tutor at Durham University. He was Master of Hatfield College, Durham, from 1851 to 1852. [6]

Henderson was ordained in 1859. He was then Headmaster of Victoria College, Jersey, and Leeds Grammar School before his appointment to the Carlisle Deanery.

Henderson was a scholar who edited various liturgical works.

In religious and magical practice, insufflation and exsufflation are ritual acts of blowing, breathing, hissing, or puffing that signify variously expulsion or renunciation of evil or of the devil, or infilling or blessing with good. 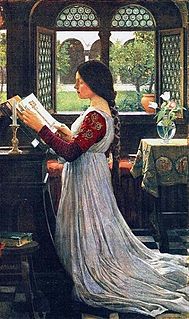 Christopher Bainbridge was an English Cardinal of the Roman Catholic Church. Of Westmorland origins, he was a nephew of Bishop Thomas Langton of Winchester, represented the continuation of Langton's influence and teaching, and succeeded him in many of his appointments, not least as provost of The Queen's College in the University of Oxford. Towards the end of the reign of King Henry VII he was successively Master of the Rolls, a Privy Counsellor, Dean of Windsor and Bishop of Durham. Becoming Archbishop of York in 1508, he was sent as procurator of King Henry VIII to the papal court of Pope Julius II, where he was active in the diplomatic affairs leading to Henry's war with France, and took part in the election of Julius's successor Pope Leo X. He was murdered by poisoning in Italy in 1514, and was succeeded as Archbishop of York by Thomas Wolsey.

The Use of York was a variant of the Roman Rite practised in part of northern England, prior to the reign of Henry VIII. During Henry's reign the Use of York was suppressed in favour of the Sarum rite, followed by the Book of Common Prayer. "Use" denotes the special liturgical customs which prevailed in a particular diocese or group of dioceses; it is one of the medieval English Uses, together with the Use of Sarum.

The Lyme Caxton Missal is an incunable or early printed book containing the liturgy of the Mass according to the Sarum Rite, published in 1487 by William Caxton. The copy at Lyme Park, Cheshire, England, is the only nearly complete surviving copy of its earliest known edition. It is held in the library of the house and is on display to visitors.

Vincent William Ryan , was the inaugural Bishop of Mauritius from 1854 to 1869.

John Sinker was an Anglican priest and author.

Media vita in morte sumus is a Gregorian chant, known by its incipit, written in the form of a response, and known as "Antiphona pro Peccatis" or "de Morte". The most accepted source is a New Year's Eve religious service in the 1300s. Reference has been made to a source originating in a battle song of the year 912 by Notker the Stammerer, a monk of the Abbey of Saint Gall: however, the Synod of Cologne declared in 1316 no one should sing this without prior permission of the residing bishop.

Joseph Henderson Singer (1786–1866) was an Irish Anglican bishop in the Church of Ireland in the 19th century.

Thomas Musgrave was Dean of Carlisle from 1684 until his death in 1686.

Francis Lear was Dean of Salisbury in the Church of England from 1846 until his death.