Bliss was born in Newton St Loe, Bath, Somerset. [1] He was the son of Rev. William Bliss and Jane Monck (born Jane Bridges). Bliss was the grandson of Dr John Bliss M.D., a physician who specialised in the treatment of gout. The family owned a tweed mill (Bliss Tweed Mill) at Chipping Norton, Oxfordshire.

Newton St Loe is a small Somerset village and civil parish located between Bath and Bristol in England. The majority of the village is owned by the Duchy of Cornwall. The parish has a population of 681.

A Doctor of Medicine is a medical degree, the meaning of which varies between different jurisdictions. In the United States, Canada and some other countries, the MD denotes a professional graduate degree awarded upon graduation from medical school. In the United Kingdom, Ireland and other countries, the MD is a research doctorate, higher doctorate, honorary doctorate or applied clinical degree restricted to those who already hold a professional degree in medicine; in those countries, the equivalent professional degree is typically titled Bachelor of Medicine, Bachelor of Surgery (MBBS).

Magdalen College is one of the wealthiest constituent colleges of the University of Oxford, with an estimated financial endowment of £273 million as of 2018. Magdalen stands next to the River Cherwell and has within its grounds a deer park and Addison's Walk. The large, square Magdalen Tower is an Oxford landmark, and it is a tradition, dating to the days of Henry VII, that the college choir sings from the top of it at 6 a.m. on May Morning.

On 4 May 1859 he married Mary Jane Wray, daughter of Rev. Cyril Wray of St. Martin's, Liverpool. Over twenty years they were to have eleven children.

Bliss suffered from a stammer. He therefore spent more than the usual time as a deacon. He was finally ordained by the Church of England in 1865. [2] He served as Curate of Honington for four years from 1858, then moved to St James, Plymouth until 1865 and took the Vicarage of North Hinksey on the outskirts of Oxford in 1866.

In 1867 Bliss published his first major work, The Canons of the First Four General Councils, in Greek and English. It warranted a second edition in 1869.

Bliss appeared to have very good prospects within the established church. He was the son of a clergyman, was blessed with a good education and had very useful contacts. He was being published. However, at Oxford he came into contact with the Oxford Movement. This group of High Churchmen originally attempted to show that the Church of England was a direct descendant of the Church established by the apostles. Many members of the group converted to Catholicism, including John Henry Newman. Bliss became curate to his uncle James at Plymouth. His uncle was a leading Anglo-Catholic.

Bliss was increasingly turning towards Catholic theology and doubting the historical legitimacy of the Church of England. In 1869 he followed Newman into the Roman Catholic faith. [3] He then secured the position of Keeper of Periodicals at the Bodleian Library in Oxford.

Work in the Vatican

In 1877 the Public Record Office asked Bliss to go to Rome to do research in the Vatican Archives on its behalf. [2] He accepted the offer and spent most of his time searching the mediaeval Papal Registers in order to find all the dealings between the Papacy and Great Britain and Ireland. This job required Bliss to spend nine months of each year in Rome and this became Bliss’ habit until he died at the Via Delphini in 1911. His wife raised the children in England and remained an Anglican.

At first the Papal bureaucrats were suspicious of an Englishmen. [4] He won them over and by 1886 he was the English Tutor to Victor Emmanuel, heir to the Italian crown. He enjoyed cordial relations with the Italian Royal family. [5]

In the Vatican Bliss produced a series called the Calendar of The Entries in the Papal Registers Relating to British Isles Volumes I and II. These were entirely Bliss's work. He edited volumes III, IV, and V with collaborators.

Bliss also studied the transcripts of manuscripts in Milan and Stockholm. His work from these cities is still available in the Public Record Office. Overall, his output is an important source of material for mediaeval historians.

Bliss is buried in Rome. His papers are kept at Downside Abbey. [6]

The Vatican Secret Archives is the central repository in the Vatican City for all of the acts promulgated by the Holy See. The pope, as Sovereign of Vatican City, owns the archives until his death or resignation, with ownership passing to his successor. The archives also contain the state papers, correspondence, papal account books, and many other documents which the church has accumulated over the centuries. In the 17th century, under the orders of Pope Paul V, the Secret Archives were separated from the Vatican Library, where scholars had some very limited access to them, and remained closed to outsiders until the late 19th century, when Pope Leo XIII opened them to researchers, more than a thousand of whom now examine some of its documents each year.

Guy de Malsec was a French bishop and cardinal. He was born at the family's fief at Malsec (Maillesec), in the diocese of Tulle. He had two sisters, Berauda and Agnes, who both became nuns at the Monastery of Pruliano (Pruilly) in the diocese of Carcassone, and two nieces Heliota and Florence, who became nuns at the Monastery of S. Prassede in Avignon. He was a nephew of Pope Gregory XI, or perhaps a more distant relative. He was also a nephew of Pope Innocent VI. Guy was baptized in the church of S. Privatus, some 30 km southeast of Tulle. He played a part in the election of Benedict XIII of the Avignon Obedience in 1394, in his status as second most senior cardinal. He played an even more prominent role in Benedict's repudiation and deposition. Guy de Malsec was sometimes referred to as the 'Cardinal of Poitiers' (Pictavensis) or the 'Cardinal of Palestrina' (Penestrinus).

Neo-ultramontanism is the belief of certain Roman Catholics, primarily during the period immediately prior to the First Vatican Council, that papal infallibility was not restricted to a small number of papal statements but applied ipso facto to all papal teachings and statements.

Hugh of Evesham was a 13th-century English churchman, physician and alchemist. Given his name, it is likely that he came from Evesham, Worcestershire.

Joseph Stevenson was an English Catholic archivist and editor of historical texts.

Roman Historical Institutes are collegiate bodies established at Rome, for the purpose of historical research, mostly in the Vatican archives. These have been set both by ecclesiastical authority, and by national governments.

Templeport civil parish is situated in the Barony of Tullyhaw, County Cavan, Ireland. The chief towns in the parish are Bawnboy and Ballymagauran. The large Roman Catholic parish of Templeport containing 42,172 statute acres was split up in the 18th & 19th centuries into three new parishes, Templeport, Corlough and Glangevlin. 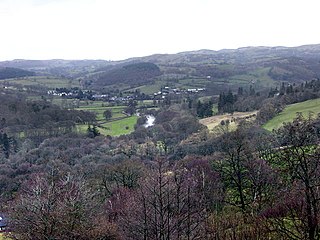 Llandderfel is a village and community in Gwynedd, Wales, near Bala, formerly served by the Llandderfel railway station. The community also includes the settlements of Rhiwlas, Llanfor, Cefnddwysarn and Frongoch. The Community population taken at the 2011 census was 1,095.

The former Priory of Douglas was a Cistercian monastery of nuns on the Isle of Man, apparently founded in the reign of Rǫgnvaldr Guðrøðarson, King of the Isles. 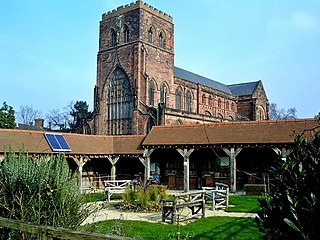 Thomas de Stratford was a medieval Archdeacon of Gloucester of the Noble House of Stratford.

The monastery of Mohill-Manchan was anciently located at Mohill, in county Leitrim. The earliest church was founded by Manchan of Mohill in the 6th century. Little is known about the former monastic community here. About the year 1216, the monastery became a religious house of the Canons Regular of Saint Augustine dedicated to the Saint Mary until suppression c. 1550 – c. 1590. The Priory of Mohill was briefly revived during Confederate Ireland rule but suppressed again by Cromwellian forces c. 1649-1653. From the ruins St. Mary's Church, Mohill, of Protestant denomination, was established in the 18th century. 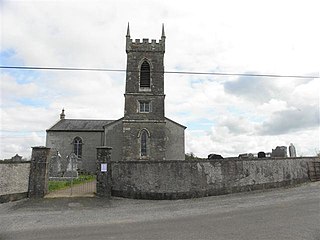 Kildallan civil parish is situated in the Barony of Tullyhunco, County Cavan, Ireland.