Born on 14 December 1850 and educated at Eton and Brasenose College, Oxford, [1] he was ordained in 1874. [2] Following a curacy at St Mark’s, Lakenham [3] he emigrated to South Africa where he was a Mission Priest before promotion to be the Archdeacon of Kimberley and Rector of St Cyprian's Church (where he served through the Siege of Kimberley), then Dean of Bloemfontein. [4] In 1905 he became Bishop of St Helena, [5] a post he held until his death on 7 March 1930. 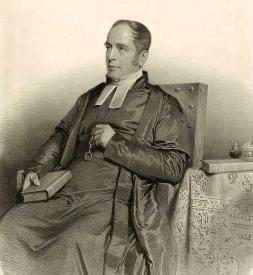 Theodore Sumner Gibson (1885–1953) was the second Anglican Bishop of Kimberley and Kuruman and subsequently the fifth Bishop of St John's from (collectively) 1928 until 1951.

John Hunter (1897–1965) was the third bishop of Kimberley and Kuruman from 1943 until 1951. He was educated at Keble College, Oxford, and ordained in 1922. His first post was as a curate in Harrow but his next post was in South Africa. After a further curacy at St Paul’s church in Rondebosch he rose rapidly in the Church hierarchy becoming successively rector of Okiep, Northern Cape; Stellenbosch and finally the cathedral parish at Bloemfontein before his elevation to the episcopate. He was awarded the Coronation Medal and died at George, just after Christmas in 1965, while still in office.

The Rt Rev. Henry Hutchinson Montgomery, KCMG, was an Anglican bishop and author in the last part of the 19th century and the very start of the 20th.

Wilfrid Arthur Edmund Westall was an English Anglican bishop in the 20th century. He served as Archdeacon of Exeter and as Bishop of Crediton.

Wilfrid Guy Sanderson was Anglican Bishop of Plymouth from 1962 to 1972.

The Rt. Rev. Edmund Courtenay Pearce was the inaugural Bishop of Derby from 1927 until his death in 1935. His brother Ernest was the Bishop of Worcester from 1919 to 1930.

John Armstrong was an Anglican bishop. He was the fourth Bishop of Bermuda. 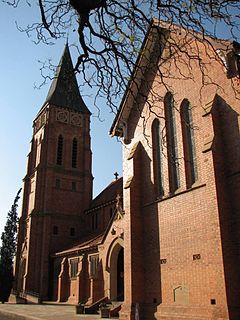 The Cathedral Church of St Cyprian the Martyr, Kimberley, is the seat of the Bishop of the Kimberley and Kuruman, Anglican Church of Southern Africa. The building was dedicated in 1908, becoming a Cathedral when the Synod of Bishops mandated formation of the new Diocese of Kimberley and Kuruman in October 1911. The first Bishop, the Rt Revd Wilfrid Gore Browne, was enthroned there on 30 June 1912.

Walter Farrar was an Anglican bishop in the first decades of the 20th century.

Allan Becher Webb was the second Bishop of Bloemfontein, afterward Bishop of Grahamstown and, later, Dean of Salisbury.

The Most Reverend William Marlborough Carter, (1850–1941) was an Anglican bishop and archbishop in South Africa.

The Very Rev. William Haye Weekes was Dean of Bloemfontein in South Africa from 1922 to 1940.

Herbert Ernest Campbell (1856–1930) was an Anglican Archdeacon in the first half of the Twentieth century.