William James Crowe Jr. (January 2, 1925 – October 18, 2007) was a United States Navy admiral who served as Chairman of the Joint Chiefs of Staff under Presidents Ronald Reagan and George H. W. Bush, and as the ambassador to the United Kingdom under President Bill Clinton.

Crowe was born in La Grange, Kentucky, on January 2, 1925. At the beginning of the Great Depression, Crowe's father moved the family to Oklahoma City. In June 1946, Crowe completed a war-accelerated course of study and graduated with the Class of 1947 from the United States Naval Academy in Annapolis, Maryland.

From 1954 to 1955, Crowe served as assistant to the naval aide of President Dwight D. Eisenhower. From 1956 to 1958, Crowe served as executive officer of the submarine USS Wahoo (SS-565). In 1958, he served as an aide to the Deputy Chief of Naval Operations. In 1960, Crowe took command of USS Trout (SS-566), homeported in Charleston, South Carolina, and served as commanding officer of that ship until 1962. From there, Crowe earned a master's degree in education at the Stanford Graduate School of Education. After turning down an invitation from Admiral Hyman G. Rickover to enter the Navy's nuclear power program, [1] Crowe earned a Ph.D. in politics from Princeton University in 1965 after completing a doctoral dissertation titled "The policy roots of the modern Royal Navy 1946-1963." [2] During the Vietnam War he was the senior adviser to the Vietnamese Riverine Force. In 1969, he took command of Submarine Division 31, homeported in San Diego, California.

A long string of assignments followed:

After he retired in October 1989, Crowe returned to the University of Oklahoma and William J. Crowe chair in geopolitics. Crowe surprised politicians when he endorsed Bill Clinton in the presidential election of 1992. President Clinton named Crowe chairman of the President's Foreign Intelligence Advisory Board in 1993. In 1994, Clinton appointed Crowe the United States Ambassador to the United Kingdom, and he served in that capacity until 1997.

Crowe sat on the boards of Texaco, Merrill Lynch, Pfizer, Norfolk Southern Corporation, and General Dynamics. He also served on the board of Emergent BioSolutions (then Bioport), a company that provided controversial anthrax vaccinations to the U.S. military in the 1990s. The deal was approved by the Clinton administration, with which Crowe had a previous relationship. At the time of his death, Crowe served as the chairman of the board of Global Options, Inc., an international risk-management and business solutions company headquartered in Washington, D.C.

As he did at the University of Oklahoma in 1990–91, Crowe taught a seminar class on national security at the United States Naval Academy from 2000 to 2007.

Crowe died on October 18, 2007, at Bethesda Naval Hospital in Maryland at age 82 due to a heart condition. [5] His funeral was held on October 31, 2007, at the Naval Academy chapel; Bill Clinton spoke. Crowe was buried later that day in the United States Naval Academy Cemetery. As of 2016, he is one of only two deceased former Chairman of the Joint Chiefs to not be buried at Arlington National Cemetery. His predecessor, John William Vessey Jr. died in 2016 and was buried in Minnesota State Veterans Cemetery, Little Falls, Minnesota.

In 2008, a fellowship was established in Crowe's honor at the University of Kentucky's Patterson School of Diplomacy and International Commerce to support a former member of the U.S. armed forces who – like Crowe – is shifting from military to diplomatic service.

In 2009, the International Programs Center at the University of Oklahoma established the Admiral William J. Crowe Jr. Award. This award is presented to an outstanding International and Area Studies (IAS) graduate every spring semester. The award recognizes an IAS student who has demonstrated high academic achievement, a commitment to public service, and a desire to pursue a career in global affairs. Also in 2009, the Xbox/ PS2 game, Heroes of the Pacific, was released. The main character's name is also William Crowe, though whether or not this was inspired by the real-life Crowe is unknown.

Crowe was married to Shirley Grennell in 1954. They had three children.

Crowe was awarded Doctor of Laws (LL.D.) honorary degrees from numerous universities, including University of Liverpool, The George Washington University, and Knox College.

In 1989 Crowe appeared in an episode of the television sitcom Cheers (Season 7, Episode 17 "Hot Rocks"), where he played himself. [6]

On 1990 he was the first recipient of the Distinguished Sea Service Award of Naval Order of the United States.

In 1993 Crowe published his memoirs in the book The Line of Fire: From Washington to the Gulf, the Politics and Battles of the New Military.

Crowe received four Defense Distinguished Service Medals and numerous military decorations from heads of state. In 1998, the American Atatürk Association honored Crowe with the "Atatürk Peace and Democracy Award". [7] Following his retirement from the Navy, he was awarded a 2000 Presidential Medal of Freedom, the United States' highest civilian honor. [8] [9]

The Chief of Naval Operations (CNO) is the head of the United States Navy. The position is a statutory office held by a four-star admiral who is a military adviser and deputy to the Secretary of the Navy. In a separate capacity as a member of the Joint Chiefs of Staff the CNO is a military adviser to the National Security Council, the Homeland Security Council, the Secretary of Defense, and the President. The current Chief of Naval Operations is Admiral Michael M. Gilday.

The Distinguished Service Medal (DSM) is a military award of the United States Army that is presented to any person who, while serving in any capacity with the United States military, has distinguished himself or herself by exceptionally meritorious service to the Government in a duty of great responsibility. The performance must be such as to merit recognition for service that is clearly exceptional. Exceptional performance of normal duty will not alone justify an award of this decoration.

The title chief of staff identifies the leader of a complex organization such as the Armed Forces, institution, or body of persons and it also may identify a principal staff officer (PSO), who is the coordinator of the supporting staff or a primary aide-de-camp to an important individual, such as a president, or a senior military officer, or leader of a large organization.

The Goldwater–Nichols Department of Defense Reorganization Act of October 4, 1986 Pub.L. 99–433,, made the most sweeping changes to the United States Department of Defense since the department was established in the National Security Act of 1947 by reworking the command structure of the United States military. It increased the powers of the chairman of the Joint Chiefs of Staff and implemented some of the suggestions from the Packard Commission, commissioned by President Reagan in 1985. Among other changes, Goldwater–Nichols streamlined the military chain of command, which now runs from the president through the secretary of defense directly to combatant commanders, bypassing the service chiefs. The service chiefs were assigned to an advisory role to the President and the Secretary of Defense, as well as given the responsibility for training and equipping personnel for the unified combatant commands.

Thomas Hinman Moorer was an admiral and naval aviator in the United States Navy who served as Chief of Naval Operations from 1967 to 1970, and as the Chairman of the Joint Chiefs of Staff from 1970 to 1974.

James David Watkins was a United States Navy admiral and former Chief of Naval Operations who served as the United States Secretary of Energy during the George H. W. Bush administration, also chairing U.S. government commissions on HIV/AIDS and ocean policy. Watkins also served on the boards of various companies and other nongovernmental organizations and as the co-chair of the Joint Ocean Commission Initiative. 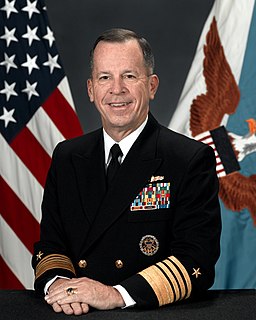 Michael Glenn Mullen is a retired United States Navy admiral, who served as the 17th Chairman of the Joint Chiefs of Staff from October 1, 2007, to September 30, 2011.

William A. Owens is a retired admiral of the United States Navy and who served as Vice Chairman of the Joint Chiefs of Staff from 1994 to 1996. Since leaving the military in 1996, he served as an executive or as a member of the board of directors of various companies, including Nortel Networks Corporation. 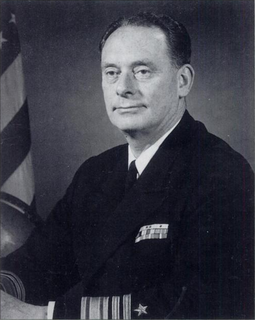 Richard Gary Colbert was a four-star admiral in the United States Navy who served as President of the Naval War College from 1968 to 1971, and as commander in chief of all NATO forces in southern Europe from 1972 to 1973. He was nicknamed "Mr. International Navy" as one of the very few senior admirals in the U.S. Navy identified with international naval cooperation during the Cold War.

James Alexander "Sandy" Winnefeld Jr. is a retired United States Navy admiral who served as the ninth Vice Chairman of the Joint Chiefs of Staff from August 4, 2011 to July 31, 2015. He previously served as the fourth Commander, U.S. Northern Command (USNORTHCOM) and the 21st Commander, North American Aerospace Defense Command (NORAD) from May 19, 2010 to August 3, 2011. Prior to that, Winnefeld served as Director for Strategic Plans and Policy, The Joint Staff which he concurrently served as the Senior Member, U.S. Delegation to the U.N. Military Staff Committee. His other operational commands include serving as the Commander, U.S. Sixth Fleet and Commander, Allied Joint Command Lisbon. As the Vice Chairman of the Joint Chiefs of Staff, Winnefeld was the second highest-ranking officer in the United States Armed Forces, second only to the Chairman of the Joint Chiefs of Staff. In 2015, he retired from the Navy after over 37 years of service. He currently serves on the board of directors for Raytheon Technologies, one of the largest aerospace and defense companies in the world.