Lowther was the third,but second surviving,son of the Hon. Henry Cecil Lowther and his wife Lady Lucy Eleanor. Among his siblings were brother Henry Lowther,3rd Earl of Lonsdale and sister Augusta Mary Lowther (wife of Hon. Gerard Noel,a son of Charles Noel,1st Earl of Gainsborough). [1] His father,a longtime MP for Westmorland,was Father of the House of Commons from 1862 until his death in 1867. [1]

He was educated privately and at Magdalene College,Cambridge. [2]

After his return from Argentina,Lowther decided to build a new house in London. He bought land in South Kensington immediately south of Hyde Park,and there erected Lowther Lodge,an exemplar of Queen Anne Style architecture. The cost was partly defrayed by a bequest from his uncle William Lowther,2nd Earl of Lonsdale,who died unmarried,and without legitimate issue,in 1872 and was succeeded by Lowther's elder brother,Henry. In 1873,he was granted the style and precedence of the younger son of an Earl by Royal Warrant. [1] He was a J.P. and a Deputy Lieutenant for Westmoreland and Cumberland and a J.P. for Bedfordshire and Suffolk. He was a director of the London and North Western Railway. [3] In 1883,Lowther bought Ashe High House in Campsea Ashe,which had 31 bedrooms and dressing rooms,six bathrooms,six reception rooms and a library,from the Sheppard family who owned the estate since 1652. [4]

On 17 December 1853,Lowther was married to the Hon. Charlotte Alice Parke (d. 1908),third daughter and co-heiress of James Parke,1st Baron Wensleydale of Walton and the former and Cecilia Arabella Frances Barlow. They had seven children including: [7]

Lowther and his wife lived at Lowther Lodge until his death in 1912. Their son Lord Ullswater sold it to the Royal Geographical Society shortly thereafter. [10]

William Lowther,2nd Earl of Lonsdale PC,FRS,styled Viscount Lowther between 1807 and 1844,was a British Tory politician.

Earl of Lonsdale is a title that has been created twice in British history,firstly in the Peerage of Great Britain in 1784,and then in the Peerage of the United Kingdom in 1807,both times for members of the Lowther family.

Viscount Ullswater,of Campsea Ashe in the County of Suffolk,is a title in the Peerage of the United Kingdom. It was created in 1921 for James Lowther upon his retirement as Speaker of the House of Commons. He was the eldest son of the Hon. William Lowther,third son of the Hon. Henry Lowther,second son of William Lowther,1st Earl of Lonsdale. The first Viscount lived to the age of 93,and was pre-deceased by both his eldest son the Hon. Christopher Lowther,a Conservative politician,and his eldest son's eldest son John Arthur Lowther (1910–1942),the title being inherited by his seven-year-old great-grandson,the second and current Viscount,in an extremely rare instance of a great-grandson succeeding his great-grandfather in a peerage. The second Viscount held office in the Conservative administrations of Margaret Thatcher and John Major and since 2003 he has been one of the ninety elected hereditary peers that remain in the House of Lords after the passing of the House of Lords Act 1999. 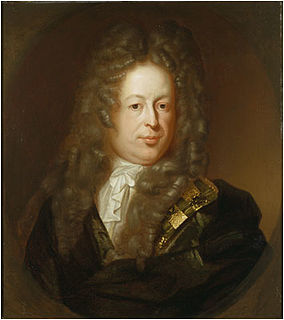 James Lowther,1st Earl of Lonsdale was an English country landowner and politician who sat in the House of Commons for 27 years from 1757 to 1784,when he was raised to the Peerage of Great Britain as Earl of Lonsdale.

William Lowther may refer to:

Colonel Henry Cecil Lowther,DL,JP was an English Conservative politician and an amateur cricketer who played first-class cricket from 1819 to 1843. His long service in the House of Commons saw him become the Father of the House.

Henry Lowther,3rd Earl of Lonsdale was a British nobleman and Conservative politician.

Anthony Edward Lowther,Viscount Lowther was an English courtier and soldier.

John Fane,9th Earl of Westmorland,known as Lord Burghersh until 1771,was an English peer and Member of Parliament.

Charles Noel Noel,1st Earl of Gainsborough,known as Charles Edwardes until 1798,as Charles Noel between 1798 and 1823 and as the Lord Barham between 1823 and 1841,was a British peer and Whig politician.

The Reverend Robert Sherard,4th Earl of Harborough was a British clergyman who inherited the earldom of Harborough.

Robert Sherard,6th Earl of Harborough,styled Lord Sherard from 1797 to 1799,was a British peer.

Philip Sherard,5th Earl of Harborough,styled Lord Sherard from 1770 to 1799,was a British peer and politician.