Mars-Jones was born in Llansannan, Denbighshire, the son of Henry Mars Jones, sometime chairman of the Denbighshire County Council, and Helen Mars Jones. His brother, David Mars-Jones, was Mayor of Colwyn in 1976 and High Sheriff of Clwyd in 1989. Mars-Jones was educated at Denbigh County School and University College Wales, Aberystwyth, where he took a First in Law and president of the Union. He then took a second degree at St John’s College, Cambridge, where he was a member of the Footlights. [1]

He joined Gray's Inn, but the Second World War broke out before he could be called to the bar. He served in the Royal Naval Volunteer Reserve, reaching the rank of lieutenant commander, and was appointed a Member of the Order of the British Empire (Military Division) in 1945. He contested Denbigh as a Labour candidate in the 1945 election. [1]

After the war, Mars-Jones joined the Wales and Chester circuit and practiced from the former chambers of Lord Justice Arthian Davies at 1 Farrar's Building. He was appointed Queen's Counsel in 1957. In 1966, he assisted Attorney-General Sir Frederick Elwyn Jones in the prosecution of Ian Brady and Myra Hindley, the Moors murderers.

Mars-Jones was appointed to the High Court in 1969 and assigned to the Queen's Bench Division, receiving the customary knighthood. He presided over a number of high-profile criminal trials. In 1976, he tried serial killer Donald Neilson, at Oxford Crown Court and sentenced him to life imprisonment. In 1977, he tried several members of the Metropolitan Police's obscene publications squad for corruption. In 1978, he tried actor John Bindon for murder (his sympathetic summing-up was thought to have swayed the jury, which acquitted Bindon). The same year, he presided over the ABC trial: he described it as an "oppressive prosecution", which led to all charges under section 1 of the Official Secrets Act being dropped by the Attorney-General. In 1986, he sentenced Nezar Hindawi, who had tried to blow up an El Al aircraft, to 45 years imprisonment, believed to be the longest determinate criminal sentence in British history. He retired in 1990, upon reaching the age of 75. [1]

He married Sheila Mary Felicity Cobon in 1947; they had three sons. The novelist and literary critic Adam Mars-Jones is his son; he published Kid Gloves: A Voyage Round My Father, a memoir about his complex relationship with his father, in 2015.

Double jeopardy, non bis in idem or ne bis in idem is a procedural defence that prevents an accused person from being tried again on the same charges following a valid acquittal or conviction. 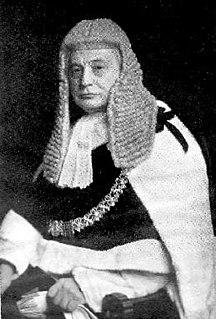 William Edgar Rayner Goddard, Baron Goddard, was Lord Chief Justice of England from 1946 to 1958, known for his strict sentencing and conservative views despite being the first Lord Chief Justice to be appointed by a Labour government, as well as the first to possess a law degree. Goddard's no-nonsense reputation was reflected in a number of nicknames that he acquired, these included: 'The Tiger', 'Justice-in-a-jiffy', and - from Winston Churchill—'Lord God-damn'.. He was considered one of the last Hanging Judges.

Sir Adrian Bruce Fulford, styled The Rt Hon. Lord Justice Fulford, is a Lord Justice of Appeal and became, in 2017, the first Investigatory Powers Commissioner., a post he held until October 2019, when he became Vice-President of the Court of Appeal, in succession to Lady Justice Hallett DBE.

Sir David Anthony Poole was an English barrister and High Court judge. He is perhaps best known for representing Eric Cantona on charges of a "flying kick" assault of an opposition spectator in 1995.

Sir Richard George Rougier was a judge of the High Court of England and Wales for 15 years. He was the son of noted romance novelist Georgette Heyer.

Sir David Watkin Williams-Wynn, 11th Baronet DL of Wynnstay in the County of Denbigh (Wales), and of Gray's Inn in the county of Middlesex (London), is a member of the surviving Welsh nobility and is the closest known living heir of the Princely House of Aberffraw, the former ruling family of Gwynedd and the Principality of Wales, who were deposed in the 1282 Edwardian Conquest of Wales.

Sir Michael Alexander Geddes Sachs was a British jurist who was the first solicitor to be appointed as a High Court judge. Since his appointment in 1993, only three other solicitors have been appointed to the High Court, a role typically reserved for barristers: Lawrence Collins in 2000, Henry Hodge in 2004, and Gary Hickinbottom in 2008.

Sir Colman Maurice Treacy is a retired Lord Justice of Appeal. Previously, he was a barrister in Birmingham. He presided over a number of criminal trials, including those of an Afghan warlord, Faryadi Sarwar Zardad, and two of the killers of Stephen Lawrence. 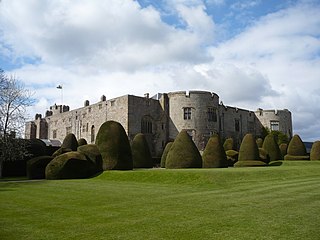 Sir Richard Myddelton, 3rd Baronet, of Chirk Castle, Denbighshire, was a Welsh landowner and Tory politician who sat in the House of Commons from 1685 to 1716.

Paul Michael Warner is an American federal magistrate judge for the United States District Court for the District of Utah. He was appointed to this position on February 19, 2006.

Sir Kenrick Eyton was a Welsh lawyer and politician who sat in the House of Commons in 1660. He fought in the Royalist army in the English Civil War.

Sir Richard Somers Travers Christmas Humphreys was a noted British barrister and judge who, during a sixty-year legal career, was involved in the cases of Oscar Wilde and the murderers Hawley Harvey Crippen, George Joseph Smith and John George Haigh, the 'Acid Bath Murderer', among many others.