William Grawn Milliken (March 26, 1922 – October 18, 2019) was an American businessman and politician who served as the 44th Governor of Michigan. A member of the Republican Party, he is the longest-serving governor in Michigan history, serving more than three full four-year terms from 1969 to 1983. During this period he dealt with dramatic changes to the state economy, due to industrial restructuring and challenges to the auto industry, resulting in loss of jobs and population from Detroit, the state's largest city.

In 1992, the legislature established term limits for the governor's position, limiting service to two terms for lifetime.

Milliken was born in Traverse City, Michigan, the second child in a family devoted to public service. His father, James T. Milliken, served as mayor of Traverse City and as Michigan State Senator for the 27th District, 1941–50, and his mother Hildegarde (née Grawn) served on the Traverse City School Board; she was the first woman elected to public office in the city. [1] Milliken's paternal grandfather James W. Milliken had previously one term as a Michigan state senator from the 27th District, 1898–1900. [2]

After graduating from public high school, Milliken entered Yale University, where he met his future wife, Helen Wallbank. In 1942, he interrupted his studies to enlist in the Army Reserve Corps and, in early 1943, volunteered for the Army Air Corps. During World War II, he flew 50 combat missions as a waist-gunner on B-24 bombers and survived two crash landings. He received seven military honors, including the Purple Heart and Air Medal. [3] [4]

On October 20, 1945, one month after his honorable discharge, Milliken married Helen. The couple had two children: a daughter, Elaine, a lawyer and feminist who died of cancer in 1993; and a son William, Jr. The following spring, Milliken graduated from Yale.

William and Helen Milliken moved to Traverse City, Michigan that year and he became president of J.W. Milliken, Inc., a department store founded by his grandfather, and later run by his father. Helen Milliken died at the age of 89 on November 16, 2012 at their Traverse City home, from ovarian cancer. [5]

In 1947, Governor Kim Sigler appointed Milliken to the Michigan Waterways Commission. In 1960, Milliken was elected as a state senator from the 27th District, serving from 1961 to 1964. He was elected and served as the 52nd Lieutenant Governor of Michigan from 1965 to 1969. He succeeded to the position of governor after George W. Romney resigned from office to serve in President Richard Nixon's cabinet. Milliken was subsequently elected to full four-year terms in his own right in 1970, 1974, and 1978. He was considered to be a moderate Republican governor in the Nelson A. Rockefeller mold. In June 1982, the governor led the formation of the Council of Great Lakes Governors. [ citation needed ]

Governor for 14 years, Milliken is the longest-serving person in that position in state history. With governors limited to two elected terms in office since 1992, it is unlikely that any will serve longer than Milliken. John Engler served for 12 years as governor from 1991 to 2003, making him the second Republican after Milliken to serve three four-year terms.

In December 1982, Milliken appointed Dorothy Comstock Riley to the Michigan Supreme Court to fill the vacancy caused by the death of Blair Moody, Jr.. Riley had run for election to the Supreme Court in the 1982 general election and had been defeated. Milliken was leaving office in less than a month and newly elected Democratic Governor James Blanchard argued he should have made the appointment to replace Moody rather than Milliken. In 1983, the other Supreme Court Justices voted 4-2 to remove Riley from the court, and Blanchard appointed his own choice. Riley was elected to the court in her own right in 1985. [6]

In 2004, Milliken broke with party ranks to endorse Democratic Senator John Kerry in his bid to unseat George W. Bush as President of the United States: "The truth is that President George W. Bush does not speak for me or for many other moderate Republicans on a very broad cross section of issues." [7]

Milliken spoke at the funeral of former Mayor of Detroit Coleman Young in 1997, who was the first African American elected as mayor of that city. In 2008, he endorsed John McCain for president, but backed away in October after McCain's campaign began attacking Democratic candidate Barack Obama. He told the Grand Rapids Press that "He is not the John McCain I endorsed."[ clarification needed ] Milliken expressed concern about the direction of the Republican Party: "Increasingly, the party is moving toward rigidity, and I don't like that. I think Gerald Ford would hold generally the same view I'm holding on the direction of the Republican Party." [8]

In 2010, Milliken endorsed businessman Rick Snyder in the Republican gubernatorial primary. [9] He also backed Snyder in the general election. In 2014 Michigan gubernatorial election, Milliken endorsed Snyder again for a second term. Milliken did not limit his support to Republican candidates, supporting Democrat Gary Peters in the 2014 United States Senate election in Michigan instead of the Republican nominee, Terri Lynn Land. [10]

In 2015, Milliken signed an amicus brief in support of same-sex marriage. [11] In August 2016, Milliken announced that he would vote for Hillary Clinton for president in the 2016 presidential election, saying that Donald Trump does not embody Republican ideals. [12] On October 18, 2019, William Milliken died after years of declining health at his home in Traverse City. [4]

Howard Eliot Wolpe was a seven-term U.S. Representative from Michigan and Presidential Special Envoy to the African Great Lakes Region in the Clinton Administration, where he led the United States delegation to the Arusha and Lusaka peace talks, which aimed to end civil wars in Burundi and the Democratic Republic of the Congo. He returned to the State Department as Special Advisor to the Secretary for Africa's Great Lakes Region. Previously, he served as Director of the Africa Program at the Woodrow Wilson International Center for Scholars, and of the Center's Project on Leadership and Building State Capacity. While at the Center, Wolpe directed post-conflict leadership training programs in Burundi, the Democratic Republic of the Congo and Liberia. 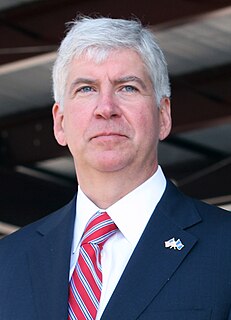 Richard Dale Snyder is an American politician, business executive, venture capitalist, lawyer and accountant who served as the 48th governor of Michigan from 2011 to 2019. He is a member of the Republican Party. 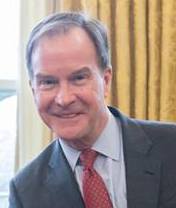 William Duncan Schuette is an American lawyer and politician who served as the 53rd attorney general of Michigan from 2011 to 2019. He was the unsuccessful Republican nominee for Governor of Michigan in the 2018 gubernatorial election, losing to Democrat Gretchen Whitmer.

Andrew "Andy" Dillon is a Democratic Party politician from the U.S. state of Michigan. He was appointed by Governor Rick Snyder, a Republican, to be the state's treasurer. Before serving in the Cabinet, Dillon was speaker of the Michigan House of Representatives. 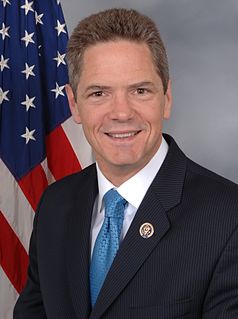 Mark Hamilton Schauer is an American politician, member of the Democratic Party and former U.S. Representative for Michigan's 7th congressional district, serving from 2009 to 2011.

Brian Nelson Calley is an American politician who served as the 63rd lieutenant governor of Michigan, from 2011 to 2019. A member of the Republican Party, Calley served as a member of the Michigan House of Representatives from 2007 to 2011.

Jerry D. Roe quote the "Blue Skies and Happy Trails" known as "Mr. Republican", is currently an adjunct professor at Lansing Community College and is best known for his 10-year stint from 1969 to 1979 as the executive director of the Michigan Republican Party. Jerry was also declared a Michiganian of the Year by the Detroit News in 1986 and is father of Jason Roe, former chief of staff to United States Representative Tom Feeney and former deputy campaign manager of the 2008 presidential primary campaign of Mitt Romney.

James H. Brickley was the 56th and 58th Lieutenant Governor of Michigan and a justice of the Michigan Supreme Court from 1982 to 1999. He was a Republican.

Daniel Joseph Benishek is an American physician and politician who was the U.S. Representative for Michigan's 1st congressional district from 2011 to 2017. He is a member of the Republican Party.

The 2012 United States House of Representatives elections in Michigan was held on Tuesday, November 6, 2012, to elect the 14 U.S. Representatives from the state of Michigan, a decrease of one following the 2010 United States Census. The elections coincided with the elections of other federal and state offices, including a quadrennial presidential election and an election to the U.S. Senate. Primary elections were held on August 7, 2012. The filing deadline for candidates to file to run in the primary was May 15. Except for two seats, all the incumbents sought re-election. The open seats were the 5th and 11th Congressional Districts. Due to the loss of one seat from the 2010 Census, two congressmen ran against each other. Despite Democrats winning more than 240,000 more votes for U.S. House districts statewide, Republicans won nine of 14 seats and Michiganders tied a state record by electing the lowest rate of U.S. Representatives by a major party whilst simultaneously casting its electoral votes for that party's presidential nominee.

The 2014 Michigan House of Representatives elections were held on November 4, 2014, with partisan primaries to select the parties' nominees in the various districts on August 5, 2014. Members elected at the 2014 election will serve in the 98th Michigan Legislature which convenes on January 7, 2015.

Helen Wallbank Milliken was an American women's rights activist, environmentalist, and former First Lady of Michigan. Milliken, the longest serving First Lady in Michigan's history, served from 1969 to 1983 during the tenure of her husband, former Michigan Governor William Milliken. Milliken was known for her activism on behalf of many causes throughout her life. During the 1970s, she was one of Michigan's leading proponents of the proposed Equal Rights Amendment to the United States Constitution.

The 2018 United States House of Representatives elections in Michigan was held on November 6, 2018, to elect the 14 U.S. Representatives from the state of Michigan, one from each of the state's 14 congressional districts. The elections coincided with the gubernatorial election, as well as other elections to the House of Representatives, elections to the United States Senate in 33 other states and various state and local elections. The filing deadline for candidates filing for the August 7 primary was April 24, 2018. Unless otherwise indicated, the Cook Political Report has rated the congressional races as safe for the party of the incumbent.

Elizabeth Tripp "Beth" Clement is an Associate Justice of the Michigan Supreme Court, appointed to the bench in November 2017 by Gov. Rick Snyder.