William Henry Shaw (1830 –1896) was an Irish-born Australian engineer and ironfounder who founded the company that later became the Phoenix Foundry.

On 21 November 1863 he was named as a shareholder in the newly formed Rising Star Gold Mining Company (Limited). [7]

He died on 24 August 1896, at the age of 66 years, after a lingering illness, suffering from a complication of disorders. He was a justice of the peace and was regarded as one of the most capable engineers in Australia. Three hundred locomotives running on Victorian lines were manufactured under his supervision. He left a widow and seven sons and four daughters. His son, W. H. Shaw, junior, worked at the Phoenix Foundry. Another son, J. C. Shaw was a barrister and solicitor in Ballarat. [3]

On 19 September 1906 The Phoenix Foundry Company of Ballarat ceased to exist with the sale of the business being completed to Messrs Cameron and Sutherland. The sale price was not disclosed, but was understood to exceed £25,000. [6] 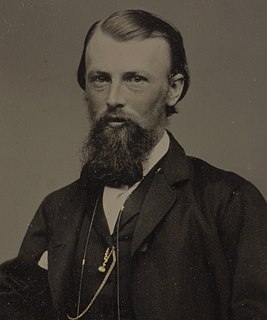 William John Wills was a British surveyor who also trained as a surgeon. Wills achieved fame as the second-in-command of the ill-fated Burke and Wills expedition, which was the first expedition to cross Australia from south to north, finding a route across the continent from the settled areas of Victoria to the Gulf of Carpentaria.

Richard Cameron Wardill was an Australian rules footballer and coach who played for the Melbourne Football Club in the Victorian Football League (VFL).

The Phoenix Foundry was a company that built steam locomotives and other industrial machinery in the city of Ballarat, Victoria, Australia. Over 30 years they built 352 locomotives for the Victorian Railways, of 38 different designs. 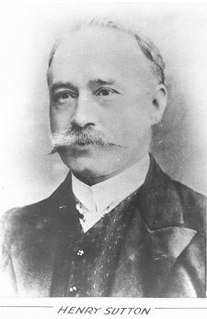 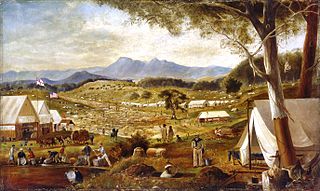 Langlands foundry was Melbourne's first foundry and iron shipbuilder (1842–97). It was established in 1842 by two Scottish immigrants, Robert Langlands and Thomas Fulton (ironmaster) (1813–1859) who had formed a partnership before emigrating. the business was known as the 'Langlands Foundry Co'.

Austral Otis was a Melbourne engineering works established in 1887 on site of former Langlands foundry in Grant Street South Melbourne. It was one of the largest manufacturers of elevators in Australia and continued as the Otis Elevator Company.

Henry Beaufoy Merlin (1830–1873) was an Australian photographer, showman, illusionist and illustrator. In the 1850s he worked as a theatrical showman and performer in Sydney, Newcastle and Maitland. In 1863 he was the first person to introduce Pepper's ghost to Australia. After this, he took up photography and between 1869 and 1872 turned the American Australasian Photographic Company into one of the most respected studios in Australia. Between 1872 and 1873 he worked extensively documenting the goldfields and mining towns of New South Wales. In 1873, as an employee of Bernhardt Holtermann, he photographed Sydney and many rural New South Wales towns. He died on 27 September 1873.

George Sutherland Smith was a Scotsman who migrated to Australia, a builder and paddle-steamer captain who turned to winemaking, with considerable success, founding the All Saints winery in the Rutherglen region of Victoria.

Richard John Hall was an Australian rules footballer who played with Collingwood in the Victorian Football League (VFL).

George Sylvester Threlfall was an Australian rules footballer who played with Richmond in the Victorian Football League (VFL).

George Threlfall (1819–1897) was an English-born Australian engineer and entrepreneur who founded the mining company that later became the Phoenix Foundry. 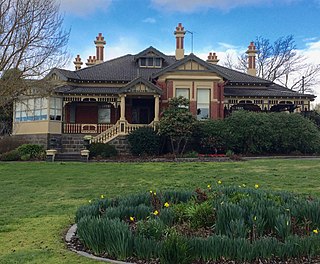 Eyres House is an historic residential property, located at 810 Ligar Street Soldiers Hill in the Victorian gold rush city of Ballarat, Victoria, Australia. Later named Balmoral, the house was constructed between 1901 and 1905 for Joseph Bryant, and having passed through as series of private hands, is now under the ownership of the Ballarat Health Services for use as a day centre and intermittent residential service for people with memory loss and confusion.

Lal Lal Iron Mine and Smelting Works were located close to the western branch of the Moorabool River, near the town of Lal Lal, Victoria, Australia, which lies on the Geelong-Ballarat railway line about 19 km from Ballarat. From 1875 to 1884, pig iron was made there in a blast furnace using iron ore mined at the site, locally produced charcoal, and limestone from a nearby deposit. The works ultimately proved to be uneconomic. It remains the only attempt to establish an iron smelting industry in Victoria. 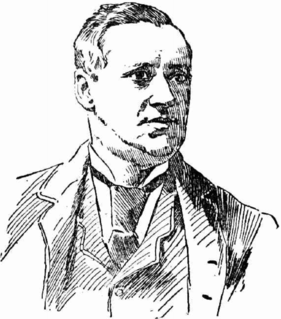 John Rodger Greville was an Irish-born comic actor, singer, songwriter and stage manager who had a long career in Australia.