William Spencer Vickrey (21 June 1914 – 11 October 1996) was a Canadian-American professor of economics and Nobel Laureate. Vickrey was awarded the 1996 Nobel Memorial Prize in Economic Sciences with James Mirrlees for their research into the economic theory of incentives under asymmetric information, becoming the only Nobel laureate born in British Columbia.

The announcement of his Nobel Prize was made just three days prior to his death. Vickrey died while traveling to a conference of Georgist academics that he helped found and never missed once in 20 years. [1] [2] His Columbia University economics department colleague C. Lowell Harriss accepted the posthumous prize on his behalf. There are only three other cases where a Nobel Prize has been presented posthumously.

Vickrey was born in Victoria, British Columbia and attended high school at Phillips Academy in Andover, Massachusetts. After obtaining his B.S. in Mathematics at Yale University in 1935, he went on to complete his M.A. in 1937 and PhD in 1948 at Columbia University, where he remained for most of his career.

Vickrey was the first to use the tools of game theory to explain the dynamics of auctions. [3] In his seminal paper, Vickrey derived several auction equilibria, and provided an early revenue-equivalence result. The revenue equivalence theorem remains the centrepiece of modern auction theory. The Vickrey auction is named after him. [3]

Vickrey worked on congestion pricing, the notion that roads and other services should be priced so that users see the costs that arise from the service being fully used when there is still demand. [4] [5] [6] [7] Congestion pricing gives a signal to users to adjust their behavior or to investors to expand the service in order to remove the constraint. The theory was later partially put into action in London.

In public economics, Vickrey extended the Georgist marginal cost pricing approach of Harold Hotelling [8] and showed how public goods should be provided at marginal cost and capital investment outlays financed with land value tax. Vickrey wrote that replacing taxes on production and labor ("including property taxes on improvements") with fees for holding valuable land sites "would substantially improve the economic efficiency of the jurisdiction". [9] Vickrey further argued that land value tax had no adverse effects and that replacing existing taxes in this way would increase local productivity enough that land prices would rise instead of fall. He also made an ethical argument for Georgist value capture, noting that owners of valuable locations still take (exclude others from) local public goods, even if they choose not to use them, so without land value tax, land users have to pay twice for those public services (once in tax to government and once in rent to holders of land title). [10]

Vickrey's economic philosophy was influenced by John Maynard Keynes and Henry George. [11] He was sharply critical of the Chicago school of economics and was vocal in opposing the political focus on achieving balanced budgets and fighting inflation, especially in times of high unemployment. Working under General MacArthur, Vickrey helped accomplish radical land reform in Japan. [12]

Vickrey had many graduate students and protegés at Columbia University, including the economists Jacques Drèze, Harvey J. Levin, [13] and Lynn Turgeon. [14]

Vickrey married Cecile Thompson in 1951. He was a Quaker and a member of Scarsdale Friends Meeting. [15] He died in Harrison, New York in 1996 from heart failure.

Marie-Esprit-Léon Walras was a French mathematical economist and Georgist. He formulated the marginal theory of value and pioneered the development of general equilibrium theory. Walras is best known for his book Éléments d'économie politique pure, a work that has contributed greatly to the mathematization of economics through the concept of general equilibrium. The definition of the role of the entrepreneur found in it was also taken up and amplified by Joseph Schumpeter. 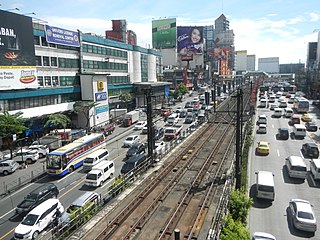 Transport economics is a branch of economics founded in 1959 by American economist John R. Meyer that deals with the allocation of resources within the transport sector. It has strong links to civil engineering. Transport economics differs from some other branches of economics in that the assumption of a spaceless, instantaneous economy does not hold. People and goods flow over networks at certain speeds. Demands peak. Advance ticket purchase is often induced by lower fares. The networks themselves may or may not be competitive. A single trip may require the bundling of services provided by several firms, agencies and modes. 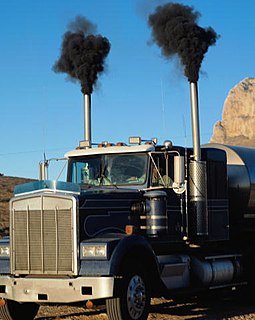 In economics, an externality or external cost is an indirect cost or benefit to an uninvolved third party that arises as an effect of another party's activity. Externalities can be considered as unpriced goods involved in either consumer or producer market transactions. Air pollution from motor vehicles is one example. The cost of air pollution to society is not paid by either the producers or users of motorized transport to the rest of society. Water pollution from mills and factories is another example. All consumers are all made worse off by pollution but are not compensated by the market for this damage. A positive externality is when an individual's consumption in a market increases the well-being of others, but the individual does not charge the third party for the benefit. The third party is essentially getting a free product. An example of this might be the apartment above a bakery receiving the benefit of enjoyment from smelling fresh pastries every morning. The people who live in the apartment do not compensate the bakery for this benefit.

Classical economics, classical political economy, or Smithian economics is a school of thought in political economy that flourished, primarily in Britain, in the late 18th and early-to-mid 19th century. Its main thinkers are held to be Adam Smith, Jean-Baptiste Say, David Ricardo, Thomas Robert Malthus, and John Stuart Mill. These economists produced a theory of market economies as largely self-regulating systems, governed by natural laws of production and exchange.

Georgism, also called in modern times Geoism, and known historically as the single tax movement, is an economic ideology holding that, although people should own the value they produce themselves, the economic rent derived from land—including from all natural resources, the commons, and urban locations—should belong equally to all members of society. Developed from the writings of American economist and social reformer Henry George, the Georgist paradigm seeks solutions to social and ecological problems, based on principles of land rights and public finance which attempt to integrate economic efficiency with social justice.

Merrill Mason Gaffney was an American economist and a major critic of Neoclassical economics from a Georgist point of view. Gaffney first read Henry George's masterwork Progress and Poverty as a high school junior. This interest led him to Harvard in 1941 but, unimpressed with their approach to economics he left in 1942 to join the war effort. After serving in the southwest Pacific during World War II he earned his B.A. in 1948 from Reed College in Portland, Oregon. In 1956 he gained a Ph.D. in economics at the University of California, Berkeley. There he addressed his teachers' skepticism about Georgism with a dissertation entitled "Land Speculation as an Obstacle to Ideal Allocation of Land." Gaffney was Professor of Economics at the University of California, Riverside from 1976 onwards. He died in July 2020 at the age of 96.

The Henry George theorem states that under certain conditions, aggregate spending by government on public goods will increase aggregate rent based on land value more than that amount, with the benefit of the last marginal investment equaling its cost. The theory is named for 19th century U.S. political economist and activist Henry George.

Jacques H. Drèze was a Belgian economist noted for his contributions to economic theory, econometrics, and economic policy as well as for his leadership in the economics profession. Drèze was the first President of the European Economic Association in 1986 and was the President of the Econometric Society in 1970.

Clement Lowell Harriss (1912–2009) was an American economist, a past president of the National Tax Association and a former executive director of the Academy of Political Science. He was one of the United States' leading tax experts and the author of highly regarded economics textbooks and other books on economic subjects. He was professor emeritus of economics at Columbia University and taught there for 43 years. He was the professor for whom the C. Lowell Harriss Professorship of Economics and International Affairs at the School of International and Public Affairs at Columbia was named.

Edward Hedrick Clarke was an American Senior Economist with the Office of Management and Budget, involved in transportation regulatory affairs.

Wikiquote has quotations related to William Vickrey .
This page is based on this Wikipedia article
Text is available under the CC BY-SA 4.0 license; additional terms may apply.
Images, videos and audio are available under their respective licenses.