Smith attended Auburn University, where he was a successful athlete for the Auburn Tigers. [4] Smith arrived at Auburn as a nationally renowned high-school sprinter from his time at Uniondale High School, New York. Track and Field News named him High School Athlete of the Year in 1974. [5] [6] [7]

Smith started his college career as a sprinter. He then switched to the longer distance of 400 m., prompted by injuries incurred in shorter sprints, and by the emergence of competition from up-and-coming sprinters like Harvey Glance. [4] Despite this, Smith was a successful enough 100 m. sprinter to be an alternate for the United States 4 × 100 m. relay team at the 1976 Montreal Olympics. Having finished fifth in the 100 m. final at the United States Olympic Trials, he was placed in the third qualifying position up to 80 m. of the race. [8] [9] At his new distance of 400 m., Smith quickly achieved national success, winning two NCAA titles at the distance. [4] [10]

Internationally, Smith won a silver medal at the 1977 World Student Games at 400 m.

When he graduated in 1978, Smith received his university's top honor of Athlete of the Year. [6]

After graduation, Smith continued as an athlete. He was twice United States National Champion at 400m., in 1979 and 1980. [11] His reward in 1979 was a place on the American team for the Pan American Games at 400 m. Here he won bronze. [12] Smith, as American No. 1 was expected to be the main rival to the great Cuban athlete Alberto Juantorena. In the end, a foot injury and a problem with a shoe, plus an inspired piece of running by his American colleague Tony Darden, meant it was Darden and not him who beat Juantorena into second. [13]

Smith finished second in the 400 m. final at the United States Olympic Trials for the 1980 Olympics. He was unable to compete due to the United States boycott of those games. A defeat of the Olympic champion Viktor Markin was little consolation. [14] Years later, he did receive one of 461 Congressional Gold Medals created especially for the spurned athletes. [15]

In 1983, he competed at the inaugural IAAF Athletics World Championships in the American 4 × 400 m. relay team. However, he collided with a competing Soviet Union runner on the third leg, falling, leaving the American final leg runner, the great 400 m. hurdler Ed Moses, with no chance of victory despite his valiant but vain effort to catch the leaders - the team eventually finished down the field. [16] Smith said "It was a stupid mistake. I almost quit the sport." [14]

In 1984, Smith finished sixth in the 400 m. final at the United States Olympic Trials for the 1984 Los Angeles Olympics thus qualifying to be part of the 4 × 400 m. relay squad for those games. [8] The United States 4 × 400 m. relay team came first and Smith received an Olympic gold medal by virtue of having run a leg for the team in a qualifying heat and the semi-final.

In 1988, he attempted again to qualify for the Olympics, as a 32-year-old. He failed, finishing 8th in a semi-final of the 400 m. trial at the United States Olympic Trials. [8] He was reported as working then full-time as a television news director. Smith himself at the time wondered about "what makes him run" and considered the attempt at making the Olympic team like "a bad habit. It gets in your blood". [17]

In 1996, Smith attempted to compete at the 1996 Atlanta Olympics as a 40-year-old. His struggle was chronicled in the New York Times. [14] He unfortunately did not qualify, even with advice from the elder statesmen of track coaching Brooks Johnson and Mel Rosen (his old college coach). He, however, did set a master's record. [6]

Since then he has created and worked at sporting camps for young people. [18]

In 2000, he was honored as one of 6 new stars in Auburn's Tiger Trail, Auburn University's replica of Hollywood's walk of fame. [19]

Smith was a very successful competitor at 400 metres at the USA National Track and Field Championships between 1979 and 1983: [22] 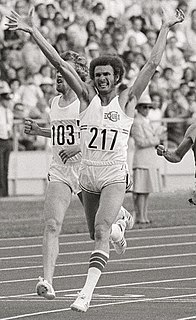 Steven Earl Riddick is an American athlete and winner of the gold medal in 4×100 meter relay at the 1976 Summer Olympics. 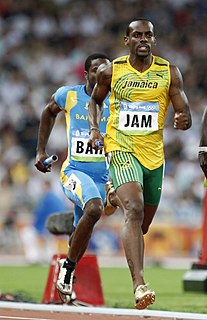 James Walker is a former American hurdler. Born in Atlanta, Georgia, he attended Auburn University from 1976-1980. Walker was one of "The Fabulous Four" along with teammates Harvey Glance, Willie Smith, and Tony Easley; together they set more school and conference records than any other foursome in the history of the Southeastern Conference. Walker qualified for the 1980 U.S. Olympic team but did not compete due to the 1980 Summer Olympics boycott. He did however receive one of 461 Congressional Gold Medals created especially for the spurned athletes.

Barton Williams is an American former hurdler. He attended California Polytechnic State University from 1975–1979. Williams is one of Cal Poly's all-time greatest track and field athletes.

Charles Douglas Brown is a retired American track and field athlete, whose specialty was the Steeplechase.

James Butler is an American former track and field sprinter who specialized in the 200-meter dash. He was an NCAA champion and winner at the Liberty Bell Classic Olympic boycott event. He represented the United States at the 1987 IAAF World Indoor Championships and placed fifth. He set a 200 m best of 20.23 seconds in 1982.

Gwen Gardner is an American female track and field sprinter who specialized in the 400-meter dash. An African-American, she grew up in Los Angeles, California. Collegiately she competed for the UNLV Rebels and was among their best sprinters in the mid-1980s. 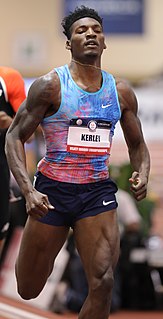 Fredrick Lee Kerley is an American track and field sprinter known primarily for competing in the 400 meters distance. He has earned several medals at the World Championships in the 400 m and 4 × 400 m relay including an individual bronze and a relay gold at the 2019 edition. Kerley's personal best time of 43.64 seconds makes him the eighth fastest man in history over 400 m.