Windy Harbour is a holiday settlement surrounded by D’Entrecasteaux National Park. Located 27km south of Northcliffe, on the south coast of Western Australia east of Augusta and west of Nornalup. It lies just east of Point D'Entrecasteaux.

Fishing, snorkelling and whale watching are the major attractions of Windy Harbour.

The area of Windy Harbour coastal zone was studied before it became part of the national park. [1] [2]

The history of the settlement is tied in with the forestry communities inland from the harbour [3] and the rock lobster fishing industry. [4]

The area was also the location of coastal fishing huts, which have been at times removed due to their not being approved by local authorities. [5] 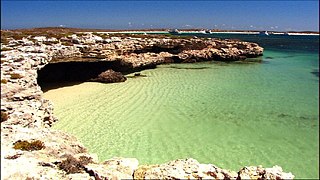 The Houtman Abrolhos is a chain of 122 islands, and associated coral reefs, in the Indian Ocean off the west coast of Australia. Nominally located at 28°43′S113°47′E, it lies about eighty kilometres (50 mi) west of Geraldton, Western Australia. It is the southernmost true coral reef in the Indian Ocean, and one of the highest latitude reef systems in the world. It is one of the world's most important seabird breeding sites, and is the centre of Western Australia's largest single-species fishery, the western rock lobster fishery. It has a small seasonal population of fishermen, and a limited number of tourists are permitted for day trips, but most of the land area is off limits as conservation habitat. It is well known as the site of numerous shipwrecks, the most famous being Dutch ships Batavia, which was wrecked in 1629, and Zeewijk, wrecked in 1727.

D'Entrecasteaux National Park is a national park in Western Australia, 315 kilometres (196 mi) south of Perth. The park is named after the French Admiral Bruni D'Entrecasteaux who was the first European to sight the area and name Point D'Entrecasteaux in 1792. The park received 168,497 visitors through 2008–2009.

The Shoalwater Islands Marine Park is a protected marine park located in Western Australia and stretches from the northern point of the Garden Island Causeway to the southern point of Becher Point. The 6,540-hectare (16,200-acre) marine park is located offshore from the suburban locality of Shoalwater. 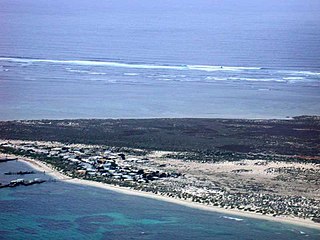 North Island is the northernmost island in the Houtman Abrolhos, a coral reef archipelago in the Indian Ocean off the coast of Mid West Western Australia. Located about 14 km (9 mi) from the nearest island group, it is one of the largest islands in the Houtman Abrolhos, and one of the few to support dune systems. It has relatively diverse flora dominated by chenopod shrubs and fauna that includes the introduced tammar wallaby, around seven species of reptile, and about 15 resident bird species.

The Seagrasses of Western Australia are submerged flowering plants found along the coast, around islands, and in Estuaries of Western Australia. The region contains some of the largest seagrass meadows in the world, and is the most diverse in the number of species. The variety of habitats along its western and southern coasts is often soft sands in shallow subtropical waters, ideal for these plants.

The Jurien Bay Marine Park is a protected marine park that is located 200 to 300 kilometres north of Perth, off the coastal tip of the Wheatbelt region of Western Australia. The 82,375-hectare (203,550-acre) marine park was formally declared on 31 August 2003 and is situated along the Indian Ocean Drive that extends south from Green Head to the southern boundary of Nambung National Park. It includes many of the islands located in this region. 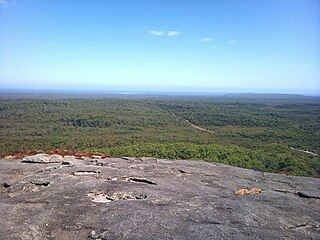 Mount Chudalup is a 187 m (614 ft) high granite outcrop in the D'Entrecasteaux National Park, on the way to Windy Harbour from Northcliffe, in Western Australia.

Pelican Lagoon is a seawater lagoon in the Australian state of South Australia located on the north coast of Kangaroo Island about 18.7 kilometres south east of Kingscote. It was named by Matthew Flinders on 4 April 1802 after the large population of pelicans present in its waters and adjoining shorelines. Its role as fishery hatchery had been identified by the early 20th century with the result that fishing in its waters has been restricted in varying degrees.

Margaret Brock Reef is a reef in the Australian state of South Australia located in the state's coastal waters on its south-east coast about 7 kilometres (4.3 mi) west of the headland of Cape Jaffa and about 27.2 kilometres (16.9 mi) south-west of the town of Kingston SE. It is the site of both a navigation aid which operated as a manned lighthouse from 1872 to 1973 and as an automatic beacon onward to the present day, and a rock lobster sanctuary declared under state law in 1973. It is named after the barque Margaret Brock which was wrecked there in 1852.