Last updated May 28, 2020
Compromise map projection defined as the arithmetic mean of the equirectangular projection and the Aitoff projection

The Winkel tripel projection (Winkel III), a modified azimuthal map projection of the world, is one of three projections proposed by German cartographer Oswald Winkel (7 January 1874 – 18 July 1953) in 1921. The projection is the arithmetic mean of the equirectangular projection and the Aitoff projection: [1] The name tripel (German for "triple") refers to Winkel's goal of minimizing three kinds of distortion: area, direction, and distance. [2]

where λ is the longitude relative to the central meridian of the projection, φ is the latitude, φ1 is the standard parallel for the equirectangular projection, sinc is the unnormalized cardinal sine function (with the discontinuity removed), and

In his proposal, Winkel set

A closed-form inverse mapping does not exist, and computing the inverse numerically is somewhat complicated. [3]

Comparison with other projections

David M. Goldberg and J. Richard Gott III show that the Winkel tripel fares well against several other projections analyzed against their measures of distortion, producing small distance errors, small combinations of Tissot indicatrix ellipticity and area errors, and the smallest skewness of any of the projections they studied. [4] By a different metric, Capek's "Q", the Winkel tripel ranked ninth among a hundred map projections of the world, behind the common Eckert IV projection and Robinson projections. [5] 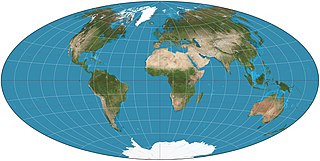 Vincenty's formulae are two related iterative methods used in geodesy to calculate the distance between two points on the surface of a spheroid, developed by Thaddeus Vincenty (1975a). They are based on the assumption that the figure of the Earth is an oblate spheroid, and hence are more accurate than methods that assume a spherical Earth, such as great-circle distance.

The equidistant conic projection is a conic map projection commonly used for maps of small countries as well as for larger regions such as the continental United States that are elongated east-to-west.