Hill grew up in Joaquin, Texas. His father, Garfield Hill, served as principal of Weldon High School in Gladewater, Texas. Winston was a tennis champion in high school. He played both offensive and defensive line in college at Texas Southern University and was an All-American. [2]

Hill was drafted by the Baltimore Colts in 1963, but signed as a free agent with New York's American Football League franchise in the same year that they became the New York Jets, and went on to record the tenth-longest string of starts in pro football history at 174. [3] As left offensive tackle for the Jets, he spent his career protecting Joe Namath's blind side and opening holes for the likes of Emerson Boozer, Matt Snell and John Riggins. He was an American Football League All-Star in 1964, 1967, 1968 and 1969, and a Pro Bowl selection in 1970, 1971, 1972 and 1973. He and Joe Namath joined the Los Angeles Rams in 1977; Namath retired after one season and Hill after three games. On January 15, 2020, Hill was inducted to the Pro Football Hall of Fame Class of 2020, and is in the Class of 2021 for the Black College Football Hall of Fame.

Hill was an overpowering blocker who was instrumental in opening gaping holes for Jet running backs during the 1968 season, in which they won the Eastern division title with 11 wins and 3 losses and gained as a team 1608 yards rushing and 3574 yards passing. Hill also starred in the Third Professional AFL-NFL World Championship Game (Super Bowl III), [4] as the Jets decimated the right side of the Baltimore Colts' defensive line with Ordell Braase at end against Hill and Fred Miller at tackle against Bob Talamini, so that Matt Snell gained 121 yards rushing in the Jets' 16–7 upset victory.

In 1970 Hill was selected by a panel of members of the AFL's Hall of Fame Board of Selectors to the second-team All-time All-American Football League Team. He was a member of the New York Jets' All-Time Four Decade Team, which was determined by the fans in 2003. Hill was a 1986 inductee into the Texas Southern University Sports Hall of Fame.

The 2009 NFL season was the 50th season for the eight original AFL teams, and that anniversary was commemorated throughout the season with 16 "AFL Legacy Games." One of those games, pitting the NY Jets against the Miami Dolphins, took place in New York on Sunday November 1; designated by the NFL as "Winston Hill Day". Hill's daughter, opera singer Heather Hill, opened the game by singing the national anthem, and fifteen of Hill's former teammates and other ex-Jets joined the festivities. As part of the celebration, Hill's jersey, #75, was retired during the halftime ceremonies.

On Monday August 16, 2010, during halftime of the first game played at the New Meadowlands Stadium (a preseason opener; Jets vs. Giants), Hill was inducted into the Jets Ring of Honor. This selection was made by an internal committee led by Jets Chairman and CEO Woody Johnson.

Hill was a 46-year Colorado resident. During that time he became known for his generous nature and philanthropic community based activities. He was an ardent supporter of youth programs and brought campers to the Joe Namath, John Dockery football camp until he was no longer able to travel. He collaborated with fellow athletes and was often the only non Bronco invited to Bronco parties when he was in town.

Hill worked with the Gilliam Youth Center in Denver and was a major supporter of restorative justice. He volunteered for years at the Denver Indian Center and got fellow pro athletes, Broncos and Nuggets to donate sporting equipment and to volunteer time at youth camps. He was a motivational speaker for the Fellowship of Christian Athletes and spoke nationally for twenty years.

Concerning the NFL, Hill was an active member of the Alumni Players Association and was an insistent advocate in two areas: Financial education for players and health care equal to the needs of retired football players, many who suffered from injuries sustained during years as a player. Financially, he had great concern surrounding young players coming in and receiving massive salaries without the information and wisdom needed to negotiate or handle their income responsibly. His most pressing passion was advocating for player's health. Prior to and during the years that concussive brain syndrome was coming into the spotlight, Hill had annually discussed the need for better healthcare provisions for retired players. Players, especially the older ones, whose careers preceded the super salaries of today, often did not have the funds nor the means to travel to their home team headquarters to request support with their increasing health concerns. The year after Hill died, 2017 at the annual Jets Alumni meeting held at the Atlantic Health Training Center, leadership discussed the changes that were in place and detailed a list of supports to answer the call for proper medical treatment. Daughter Heather Hill stated, "Winston went to the mountain top, but was not able to cross over. Still his persistence was a voice of change and action that has brought us to this day."

Hill opened his first barbecue restaurant in 1980 after apprenticing under the legendary 5 points community leader, Daddy Bruce Randolf Over the years he became involved in several restaurant ventures but his favorite location was a little take out his family still runs to this day. Hill brought a smoker and his cooking talents to Centennial, Colorado in the early 1990s and opened Winston Hill's BBQ or Winston Hill's Ribs & Stuff; now called Winston's Smoke BBQ. It is still active. [6]

Hill died on April 26, 2016 at the age of 74. [8] He died of congestive heart failure and concussive brain syndrome. At his request his brain was donated to science to further the research on brain injuries suffered by athletes.

Joseph William Namath is a former American football quarterback who played in the American Football League (AFL) and National Football League (NFL) for 13 seasons, primarily with the New York Jets. He played college football at Alabama, where he won the national championship as a senior, and was selected by the Jets first overall in the 1965 AFL Draft. During his five AFL seasons, he was a two-time MVP and twice led the league in passing yards, while leading the Jets to win one AFL championship and one Super Bowl. Both victories remain the Jets' only championships. Following the 1970 AFL–NFL merger, Namath joined the NFL with the Jets, where he was the league's passing yards and touchdowns leader during the 1972 season. He played in New York for seven more seasons, with his final year spent as a member of the Los Angeles Rams. 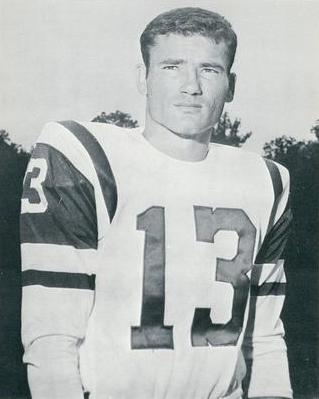 Wilbur Charles "Weeb" Ewbank was an American professional football coach. He led the Baltimore Colts to consecutive NFL championships in 1958 and 1959 and the New York Jets to victory in Super Bowl III in January 1969. He is the only coach to win a championship in both the National Football League (NFL) and American Football League (AFL). 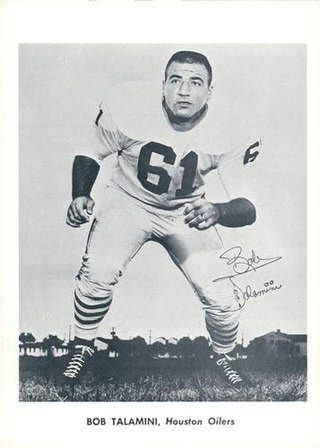 Robert Guy Talamini was an American football player. Talamini, a 6'1", 250 lb lineman, earned third-team All-SEC honors at the University of Kentucky and was drafted by the Houston Oilers of the American Football League (AFL). His professional career began with the AFL's first training camp in 1960, and was capped the day the New York Jets stunned the NFL's Baltimore Colts in Super Bowl III on January 12, 1969. 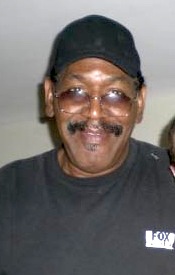 Charles AaronSmith, commonly known as Bubba Smith, was an American football defensive end and actor. He first came into prominence at Michigan State University, where he twice earned All-American honors on the Spartans football team. Smith had a major role in a 10–10 tie with Notre Dame in 1966 that was billed as "The Game of the Century." He is one of only six players to have his jersey number retired by the program. He was inducted into the College Football Hall of Fame in 1988.

Joseph Edward Klecko is an American former football player, of Polish descent, best remembered for his days as a defensive lineman, a member of the New York Jets' famed "New York Sack Exchange." 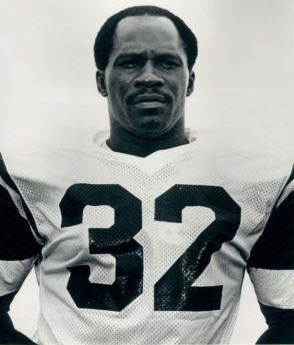 Emerson Boozer is a former running back in the American Football League (AFL) and in the National Football League (NFL). In the last year of separate drafts by the AFL and the NFL, Boozer signed with the AFL's New York Jets, rather than with an NFL team. He played his entire professional career with the Jets. Boozer was a member of the Jets team that defeated the NFL's champion Baltimore Colts, 16–7, in Super Bowl III. Before joining the American Football League, Boozer played college football at the Maryland State College, which is now the University of Maryland Eastern Shore.

The 1968 National Football League draft was part of the common draft, in the second year in which the NFL and AFL held a joint draft of college players. It took place at the Belmont Plaza Hotel in New York City on January 30–31, 1968.

The 1967 National Football League draft was conducted March 14–15, 1967, at the Gotham Hotel in New York City. It was the first common draft with the AFL, part of the AFL–NFL merger agreement of June 1966.

The 1969 National Football League draft was part of the common draft, the third and final year in which the NFL and American Football League (AFL) held a joint draft of college players. The draft took place January 28–29, 1969.

Harry Frederick Schuh was an American football player. He was an All-American tackle at the University of Memphis in 1963 and 1964. He was the third player drafted overall in the 1965 American Football League draft, after Joe Namath and Larry Elkins. He played for the American Football League's Oakland Raiders from 1965 through 1969 as the starting right tackle, winning the AFL Championship in 1967 and playing in the Second AFL-NFL World Championship Game. Schuh was an AFL Western Division All-Star in 1967, an AFL All-League tackle in 1969, and an AFC selection for the AFC-NFC Pro Bowl in 1970 as a member of the NFL's Raiders. But he was traded before the 1971 season for his replacement at right tackle, Bob Brown, an eventual member of the Pro Football Hall of Fame. Schuh finished his career with the Green Bay Packers. He was a member of the Raiders' All-Time Team.

Marvin Andrew Washington is a former American football defensive end who played eleven seasons in the National Football League (NFL). Selected in the sixth round of the 1989 NFL draft, he played eight seasons for the New York Jets of which he was a starter for six. He additionally played for the Denver Broncos and San Francisco 49ers, accumulating a total of 40.5 sacks in 155 games played during his career. Washington played both basketball and football at the University of Idaho.