Wolfgang Loitzl (born 13 January 1980) is an Austrian former ski jumper. He was the winner of the 2008–09 Four Hills Tournament and the 2009 Normal Hill World Champion.

Loitzl won the 2008–09 Four Hills Tournament. In the final competition of the tournament in Bischofshofen, he received the maximum score (20) for the first jump from all five judges. In ski jumping history, only Anton Innauer (1976), Kazuyoshi Funaki (1998), Sven Hannawald (2003), Hideharu Miyahira (2003), and Peter Prevc (2015) have matched this feat.

On 21 February 2009 Loitzl won the individual gold on the normal hill at the World Championships at Liberec ahead of fellow Austrian Gregor Schlierenzauer and Switzerland's Simon Ammann. Further success followed on 28 February the same year when Loitzl won gold as part of the Austrian quartet in the team large hill event.

Jens Weißflog is a German former ski jumper. He is one of the best and most successful ski jumper in the history of the sport. Only Finns Matti Nykänen and Janne Ahonen, Poles Adam Małysz and Kamil Stoch and Austrian Gregor Schlierenzauer have won more World Cup victories. 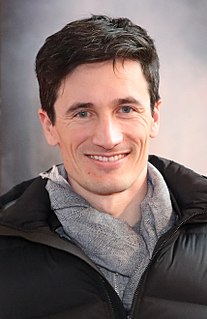 Sven Hannawald is a German former ski jumper, motor racing driver, and footballer. In ski jumping he competed from 1992 to 2004, with his career best achievement being the winner of the 2002 Four Hills Tournament and becoming the first athlete in history to win all four events in the same tournament. He also finished runner-up twice in the World Cup season, winning four medals at the Ski Jumping World Championships, as well as three medals each at the Winter Olympics and Ski Flying World Championships. After retiring from ski jumping, Hannawald played football for Kreisliga club TSV Burgau, and drove for Callaway Competition in the ADAC GT Masters series. 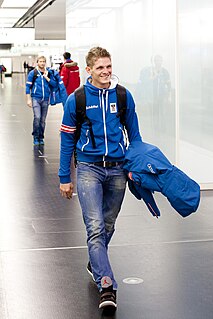 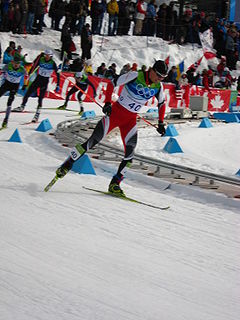 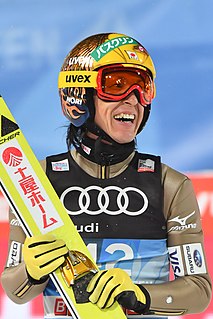 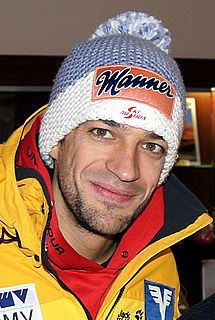 Andreas Felder is an Austrian former ski jumper. During this period he dominated the sport, together with contemporaries Jens Weißflog and Matti Nykänen. He finished in the top three overall six times in the World Cup and won the 1990/91 overall. He won his first international championship medal at the 1982 FIS Nordic World Ski Championships in Oslo with a silver medal in the team large hill event. 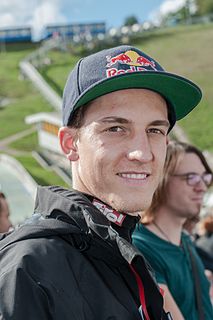 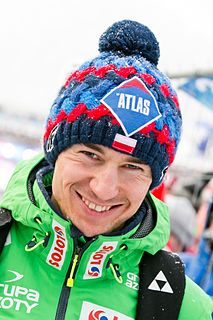 At the FIS Nordic World Ski Championships 2009 in Liberec, Czech Republic, four ski jumping were held with three for men and one for women. It was the first time women's ski jumping took place and was so successful that FIS President Gian Franco Kasper hoped to include the event for the 2014 Winter Olympics in Sochi, Russia with possible inclusion into a team event. American Lindsay Van was the first winner of the women's individual normal hill event, the first North American to medal in ski jumping at the world championship, and the first American woman to medal at the world championships. The three World Cup leaders each won a medal in the men's individual normal hill event with 2008-09 Four Hills Tournament winner Wolfgang Loitzl of Austria earning gold, the first individual of his career at the world championships. Loitzl's teammate Gregor Schlierenzauer would win silver in the same event with both teaming up to win gold in the team large hill event, given the Austrians three medals. Norway would also win three medals with a silver in the team large hill and bronzes from Anders Jacobsen and Anette Sagen. Switzerland and Germany each won two medals. Overall, six nations won medals, including Japan, who had the same team that had won the bronze medal in the team large hill at the previous championships in Sapporo, Japan.

Stefan Kraft is an Austrian ski jumper. He is one of the most successful contemporary athletes in ski jumping, having won the Ski Jumping World Cup and Ski Flying World Cup overall titles twice each, the Four Hills Tournament and Raw Air Tournament once each, and two individual gold medals at the World Championships. Since March 2017, he has held the ski flying world record of 253.5 metres (832 ft).